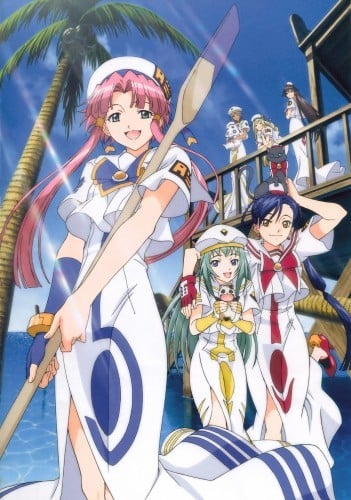 Aria the Natural Episode 3 - The Night of the Meteor Shower…

There's going to be a meteor shower, and Akari, Aika and Alice have made plans to watch it together. But this time, there's a little twist - Al, one of Neo-Venezia's gravity-controlling Gnomes, will be there as well. Even though he's shorter than the girls, he's actually three years their senior; and he knows all about physics, planets, and the beauty of the universe. What he doesn't seem to know, however, is how Aika feels whenever she's with him.

That Encounter at the Carnevale…

Looking for that Treasure…

The Night of the Meteor Shower…

The Wonder of That Rainy Day... / The Discoveries On That Spring Day...

The Smile Reflected in that Mirror…

To the Kingdom of Cats…

The Day of Festa Del Bòcolo…

That Heartwarming Town and Its People…

Chasing That Mirage... / The Light From That Nightshine Chime...

Anime-Planet users recommend these anime for fans of Aria the Natural. All available to watch right here, right now!

If you enjoyed Aria, you would definitley enjoy Aoi Hana. The mellow and easy going atmosphere coupled with great relaxing and easy-on-the-eyes animation makes them perfect for just chilling out and taking a break from the common exciting and colorful shows!

A photograph is a mysterious force that creates magical moments the instant the shutter closes and allows people’s hearts to connect. For the new girl in town, Fuu Sawatari, this is more than a saying but a way of life as she spends her days quietly attempting to capture those special instances on film and use them to bring others joy. Along with her...

Tamayura as well as the Aria series are very similar in three mains ways. First, there is an enormous strong atmosphere of conflictless slice of life (iyashikei) in both shows. This is slightly mixed with a tinge of the supernatural and/or magic in both series. In Aria, these mysterious and magical episodes are more frequent than in Tamayura. Third, the main cast in Tamayura and Aria are all female and although there are some male characters, those only play minor roles.

The main differences (which are minor at best) is the futuristic and outerworldy setting of the Aria series and Aria having somewhat more mature characters and a minor romantic narrative on the side.