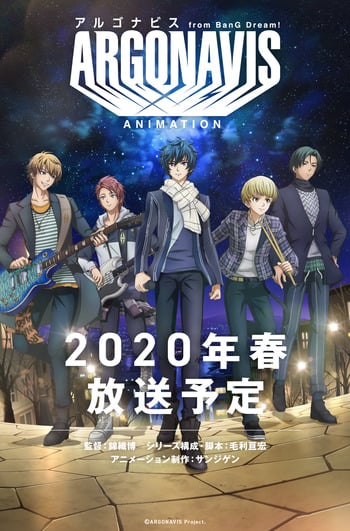 Wikipedia claims that the capital G in BanG Dream! (Japanese title: Bandori) stands for ‘girl.’  Seeing that the term comes up in season three to announce the competition for all Japanese girl bands to find the best, you might make that claim.  But then, BanG Dream! introduces Argonavis.  An all-male ensemble of would-be popstars.  As switches and paradigm shifts go, cool!  Because, with Argonavis, the franchise has decided to exchange the levels of estrogen for testosterone and see what goes.  And, with the darker feel for the rising action at this point in the series (two or three episodes to go, with the hopes and dreams of seasons plus+++++), testosterone seems fitting.

Argonavis centers on the unlikely rise of a shy young man, Ren Nanahoshi.  He avoids crowds, but the lad has the makings for a superb vocalist.  As a young boy, he was taken by his father to a rock festival.  The masses.  The shouts.  The music wafting out into the bracing air.  Impressed with the dynamics of a rock concert, Ren has now the impetus to pursue show biz.  It would not be easy, but his bandmates Yuto and Wataru convince Ren of his talents and is off on this musical adventure, but only as a member of Argonavis

Bandmates make for the solid plot line.  Disagreements over purpose and style need to be ironed out constantly.  Guitarist Yuto Goryo had been in a band before, but friction between him and vocalist Nayuta Asahi broke up the act.  Yuto knows the frailty of the band ... and fears of his own inadequacy.  Bassist Wataru Matoba is main support for Yuto and the cohesive force of band.  As Yuto frets (worry, not the guitar thingy), Wataru conciliates.  Keyboardist Rio Kikyou is a genius on piano and churns out melodies, but he does have a touch of the finickiness of the genius.  Drummer Banri Shiroishi is a farm boy with manic drum skills, but he sees music as way to wealth, a tenet which galls Yuto.  As for Banri, a traffic accident threatens the skills in his hand and dropped drumsticks in an omen for failure.  With this mix of personalities, Argonavis plies the treacherous waves of the music industry.  Add to the formula the band’s mentor and supporter, Kenzo Hakkoda, a former drummer whose bistro the boys in the band can find sanctuary.

I once thought that series would rush to a collision between ARGONAVIS and GYROAXIA, their main rival.  It could be a tale of two bands.  Their styles differ from Ren's soft, soulful style to Nayuta's driven heavy metal sound.  Ren respects Nayuta’s talents, but Nayuta is suspicious of Ren.  Both are in competition for DesFes, which showcases new talent along with grand rock masters.  But, Argonavis vs. GYROAXIA is a blind.  Drop that thought.  The main villain is the 'Industry' (symbolized by the nefarious manager Mashu) which chews up talented young performers and spits them out.  Try pulling this on Poppin' Party.  Chiyu Tamade has chutzpah enough, but any girl band that signs on with such sleaze … the notion is revolting!  Again, all that is wrong with the ‘Industry’ is encapsulated in the manager Mashu.  He discovers Argonavis (heck! he was the only member in the audience in Argonavis’ debut performance) and advances them as back-up to GYROAXIA, then pushes the rivalry approach.  GYROAXIA’s lead singer Nayuta resents the up-and-coming Ren and pushes his vocal skills almost to the point of destroying his voice.  At the height of the madness, Mashu then scouts Ren to develop a new band around him, dumping Argonavis in so doing.  Ren will have none of this.  Argonavis needs to combat the money-madness of the music industry so they can survive as an ideal pop band.

And the series has the music.  While boy-band BanG Dream have only two in attendance, their sound is riveting, the animation quite true to the music.  The color scheme is dark, as is the verve and sensation this anime wishes to project.  It is nothing like the cheerful girlie-band rendition of BanG Dream! with its series, specials, and OVA.  Honestly, if Hello Happy World! ever showed up in this series, it would be the implosion heard around the anime world!

A few more shows to go before season’s end, but it looks to be a suspenseful ride to the top of the show biz circus.

Argonavis the anime is part of Argonavis from BanG Dream! multimedia project. It is not part of the same universe as the well known BanG Dream!, so there's no cameos of the girls.

Story - The story starts off like most (music) animes, members gather to form a band, Argonavis, and they practice to work their way up to get to perform for bigger audiences. The story itself isn't very interesting, but I think it's because they're trying to not reveal too much of it in the anime. It gets more interesting near the end of the anime as it gets you interested in more stories about Argonavis, which you can anticipate with its other projects outside of the anime.

Animation - The anime is mostly animated in 3D, so there are limitations in how realistic the movements can be. But the movements are more fluid than 2D in a way. The 3D models look good, no complaints.

Sound - The best part about the anime is the music. My favourite songs in the anime are by Gyroaxia, but Argonavis has really good songs too. The lyrics in the songs are pretty good and uplifting/empowering. I feel like the song lyrics conveyed more than the story of the anime lol

Characters - One of the main characters, Nanahoshi Ren, is the vocalist of Argonavis. He kinda sets the pace of the conversations he's in. Ren's way of communicating is not exactly straight forward and more like he just voices his feelings and not his thoughts.... So it's kinda confusing in a way to understand what's going on because he's setting the pace, but the rest of his bandmates and rival somehow understand him so I guess that's good?

I'm not going to review all the characters, but I will say that Argonavis and Gyroaxia's vocalist gets most of the screen time. Argonavis' members are kinda wishy washy when something happens, but each of the members will bring each other together when the time comes. Gyroaxia's vocalist on the otherhand, Asahi Nayuta, is very straight to the point in his dislike...

Overall - I would recommend the anime for anyone who wants to get to know the band Argonavis and listen to some really good music. I think it's a good introduction to the Argonavis multimedia project. I personally don't know much about the projects at the moment, but it has a manga, music + drama tracks, web radio, and a mobile game soon to come. There are three other bands briefly introduce in the anime that will probably interest you quite a bit. (Part of the reason I didn't write much under characters since there's probably a lot more to them than the anime shows.)