Are You Lost? - Reviews 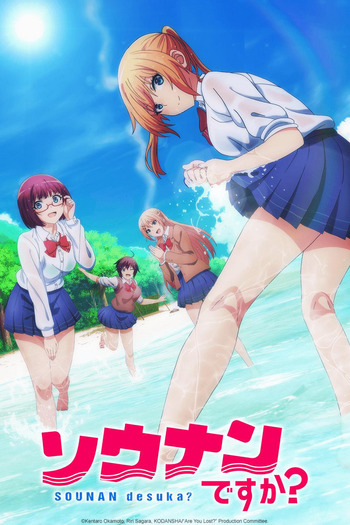 I haven't seen a review for this anime yet.  It's suprising but this anime gives valid information for what you should do if lost.  The anime itself is average with quite a bit of fan service and little character developement but every episode they give valid information about what you should do in a stranded situation.  Its generally upbeat, and each episode completes and the end.  So if you don't mind a average anime with fan service and want some good information if you happen to get stranded I recommend it.

I thought this would be some stupid ecchi show with panty shots. It has the panty shots but also a lot of accurate and important survival information. Some of it even I didn't know. Oh and it's also pretty funny too.

I'm not an anime expert, but I thought this one was... interesting...? The survival aspect was kind of what interested me, but I also came here out of curiosity expecting weird shit because **SPOILERS** I saw a clip from the piss scene in the first(...?) episode and was simultaneously weirded out and intrigued. **SPOILER END**

It's like witnessing a car crash; you can't look away, and sometimes it's what's going on that gets your attention. So obviously, this show was gonna have its strange moments, but what really caught me off guard was **SPOILERS** the (literal) batshit scene in the last episode, like, I knew about drinking piss for survival, but I have never heard of sticking dirty water up your colon for moisture, I need to fact check if it's even true. **SPOILER END**

This is another one of those "cute anime girls doing things" kinds of anime, which, if paired with ecchi, you can't really expect much from the plot. It's a good show to mindlessly watch while doing something, though, so I ended up binge watching the entire thing in like, two days. Just expect a lot of panty shots and stuff. Oh, and don't watch it with your parents in the room.

This anime is simple, but both funny and educational. The characters are likable - not very complex, but not too cliche - and slowly build up their new lives from scratch depending on the survival techniques of the odd but reliable Homare. There isn't too much detail, but the instructions/explanations are clear to the viewer, passing on easy but potentially life saving tips, although hopefully you'll never need to use them.

Definitely interesting just for the trivia, but the characters make the minimal story enjoyable to watch, rather than being like a straight up lesson or guide. With it's short episodes, I think this is an easily digestible show that will make you laugh, and leave you a little better educated for it.

Personally I really enjoyed this series, and hope it gets a sequel so I can see what other curious methods Homare teaches the others!

In the anime universe you can add teenage girls to any subject and make it interesting. Well, almost. Studio Ezo'la’s 2019 show uses short episodes of just twelve minutes each to tell the story of four girls “shipwrecked” onto a desert island. Despite the Japanese title translating as "Are We Shipwrecked?" the girls are apparently a victim of a plane crash whilst they are on a school trip. In fact, no screen time is spent on the backstory at all so we guess this information comes from the manga series, written by Kentarou Okamoto and illustrated by Riri Sagara. A plane crash is more logical as the girls have no idea where in the world they are yet there appear to be no other survivors. (Nor do the girls seem to care about any other passengers as they are never mentioned.) Being in the anime universe we couldn’t let our four beauties just drop dead. So, by coincidence one of them Homare Onishima is an extreme survival expert having spent her childhood travelling the world with her father. This gave her the experience to survive anything so she is well equipped to pull the other three girls Asuka Suzumori,  Mutsu Amatani and Shion Kujou through the experience.

Given the extreme peril of their scenario the whole drama is somewhat trivialised by the fact that the girls wear their school uniforms all the time and this is a panty-shot dominated ecchi/oppai fantasy. Although these visuals seem at odds with the story, the survival elements are quite convincing. This puts this show somewhere in the territory of “A Place Further Than the Universe” (Madhouse 2018), “Laid-Back Camp” (C-Station 2018) and “How Heavy Are the Dumbbells You Lift?” (Doga Kobo 2019) in respect to its factual/documentary/educational content. So, if you want to know how to survive life on a desert island then this is the show for you. It actually reminded us of the Matt Damon movie “The Martian” (2015) at times. Some of the content of “Are You Lost?” is a little grim and not for the faint-hearted, yet the humour levels are high and the girls remain big-boobed cuties at all times. Much of their survival is contingent upon luck and coincidences – after all this is an anime universe and we cannot let our JK-clad girlies genuinely suffer. It doesn’t take itself too seriously so watchers may spot a few story inconsistencies. For some reason they have corrugated iron sheets to hand yet they build a shelter using grass for the roof! Odd. This show is fun enough, engaging and with the occasional touch in drama. However, the characters are a little shallow and simplistic. It is hard to care too much for them and this fails to really grab the emotions.