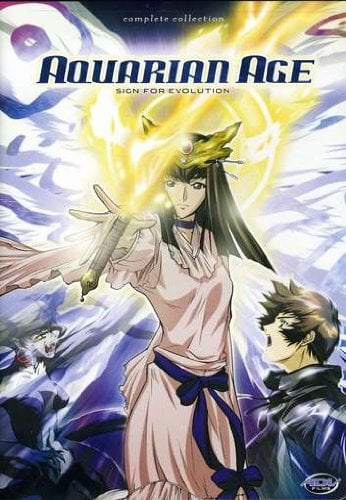 Kyouta and his friends just want to rock out all day and night long, and with a new record deal, it seems they'll be able to do just that. But when the women around him, including his best friend Yokko, start revealing strange powers, Kyouta finds himself at the crux of an ancient conflict, torn between love and loyalty.

As much as I like Madhouse as a studio, this is one of their worst projects. The story is a complete mess and everything feels boring. ART & SOUND SECTION: 6/10 Nothing particulary bad here. The graphics and sounds feel quite average in all directions. The setting is a typical city and the supernatural effects and costumes are nothing great. So symbolic overtones and a few in-depth dialogues give off the sensation that the series is not completely clished. Still, there are no highly detailed or great visuals and music themes to take notice. STORY & CHARACTER SECTION: 4/10 The leading male in the story is a typical musician / singer with the average fame of an ephemeral pop idol all around him. Unknown to him, his talent is a trigger to a future cataclysmic event, as human history will enter the Age of Aquarius (thus the name of the series). Supernatural chicks and monsters appear to control his power for their personal agendas.So far, so good. A typical messianism theme, combined with astrological remarks, a post-apocalyptic event to be avoided, supernatural forces at war and music to dress the whole. Unfortunately, NOTHING HAPPENS! Seriously, they promised a dozen epic-level events and offered practically nothing. The characters mostly talk gibberish about uninteresting events, the battles are dull, the plot is slow and the conclusion isn’t much. Even the highlights in the show are quite one-of-the-same and quite typical in comparison to similar series. And the characters, my God, they were so boring! They had nothing particular to remember them. Too bad. Wasted potential of a great concept. VALUE & ENJOYMENT SECTION: 2/10 If Aquarius is such a boring Age, long live Pisses! VERDICT: 4/10 Hrrr … ZZZ … Hrr … H-Huh! … Wha … Is it over?And now a few things about the sequel movie/ OVA to this thing. - The visuals there are much, much better; plenty of nice battles, post-apocalyptic events and pretty girls in spacesuits kicking ass. Explosions and music themes sound good, voice acting is decent. They are still nothing in comparisson to animated masterworks, like the much similar Karas.- The story… Ok, what just happened here? Where are the ties with the series? Are there even any? Supposed, the catastrophic event wasn’t prevented and these super chicks fight Armageddon On Earth. Yes, very good; so what? Is there a point to all this? With only one OVA, we just get a glimpse of all this mess. A few well made action scenes and some talking about undeveloped side-stories. Well? Where is the rest of it? Or the events that led to all this? … Nowhere! BZZZ! Fail at presentation! The characters and the story are nothing without proper explaining or development.- The OVA is titles “Don’t forget me.” Sorry baby, already did… SUGGESTION LIST Kachou Ouji: Hard Rock Save the Space. Much similar in story, less serious in plot and yet much, much more enjoyable than this thing. Choujikuu Yousai Macross. Who can forget Minmei’s singing, which could prevent entire interstellar wars?

Welcome ladies and gentlemen to the twisted circus.Here we have everything your every day masochist wants. Do you want anime straight from the dark circles of hell?We got it. Do you want entertainment similar to the Nazi's gas chambers?Hell yeah we got this too. But what if you're mad?What if you go past a pet shop,see cute little puppies and feel an uncontrolable urge to lick their paws? Well as it so happens we have the perfect solution for ya..It's called Aquarian Age and let's not fuck around it's rubbish. It's one of those anime that has the story,has the potential to be something good but the ones in charge are too soaked in bourbon they make a complete hass of it.I cannot think of another explanation for this anime's existence. Ok,so the story is about a group of youngsters that decide to form a band..Thankfully this band isn't like Backstreet Boys or anything but they share a similar audience.Namely crazy as fuck chicks that throw their knickers on stage when the band appears. And in the midst of all the screaming and bra throwing madness we also get some supernatural chicks fighting for the singer's dic.....Sorry for the singer's power....Why you ask?That's obvious dummy..His voice triggers some future apocalyptic events of course..I should know about this cause every time i try to sing while taking a shower an angry mob gathers round my house and throws rotten fish. Gone a bit off topic there...So next to ride the supernatural wagon is his "girlfriend' who also has some major powers..Yoriko,we're told,is the leader of an ancient race of Ahusimbi something or rather-i don't gave 2 fucks anyway-and has two identities,yes two identities..One is the Leader who will save the earth and the other is the Medusa who will destroy the world. So far this sounds nice..This sounds like it could be a masterpiece...Well kinda no..You see i liked the thought behind the story and i liked the fact that for once there are no hints of girl bands...Yeah yeah i know it sounds strange but come on,we are literally drowned with girl idols anime.. What i didn't like was the end result..For starters the opening song which doesn't fit the tone of the anime one bit.Try to imagine Batman with Britney Spears singing the opening sequence..I didn't like the animation,it was mediocre all around and inconsistent.I also didn't like that harem vibe,it's nice and all to have girls swooning over the bandmates but this is borderline stalkerism.Honestly most of these girls should be in the most wanted police list not left in their own devices. And i would understand if the MC was in any way interesting or even Elvis Presley..But this guy is your basic male in every possible way..It's not like he has the voice of Rob Halford either so i cannot understand why every time he opens his mouth pussies in a 5 km radius are being drenched..Maybe it's the fact that he plays hard to get when we all know he wants to eat that pussy. But most of all i didn't like the fights..This is supposed to be a supernatural war but all the fights are just some lights on the screen clashing with each other...SOME FUCKING LIGHTS..Need i say more? Even the voice actors weren't into it that much..You can feel their need to go to the pub and get drunk as fast as possible.And who can blame them?This anime is atrocious. Once again we have a missed opportunity here..Nice story but no will to tranfer it onto the screen.And it's a pity cause i'm sure it would be epic...But as it stands i'd rather watch Big Bang Theory or something equally unfunny.

Story:In the beginning (meaning the first couple of episodes) I happened to really like this show. I mean, the characters were very relatable, and there weren't any forced actions between the characters. Also, the idea of combining super powers and the entertainment industry is certainly...unique. So I kept going on eagerly....and was bitterly dissapointed.After the first few episodes, every single episode after that is pure unadultarated angst. The main character angsted, which made his band angst. Then his girl friend angsted, and then he angsted some more because everyone else was angsting. Honestly, I deal with enough angst as it is (being that I'm in High School), but this was just too much. I found myself just blankly staring at the screen wishing for the series to be over and done with. It was just too boring. And then the fangirls. Ugh. EVERY SINGLE GIRL had a gigantic crush on the main character. Yeah, sure, he's in a semi known band. And he's pretty cute. But...honestly, he wasn't that special, he was a pretty bland character. Yet all the girls are freakin out. I guess that's to be expected though, seeing as how girls are freakin out over similar people in real life. However, what made me iffy, was that only about one girl in his class was freaking out about him. If he's so popular, why isn't the rest of his class fangirling over him as well?Another thing that I didn't really like was the fact that they made being discovered look so easy. Maybe some bands really do experience that, but I think they should have made the process of becoming famous a bit more...intense. I know the story wasn't focusing on how the band became famous, but they could have inserted some hints of their previous struggles.I really can't write any more about the story because...there was no story. Just a whole bunch of depressed people.Animation:It was alright. Nothing special. I guess it was good considering it was made in 2002, and I did like some character designs (the keyboard player).Sound:Ok. So, since this is an anime about a band and magical people in the entertainment industry, you would expect it to be pretty good on the music side. Through out the whole entire series, they only play one song from the band, their most "epic" and awesome song. And honestly, it wasn't that good. The rest of the time, the music kept repeating itself through out the series.Characters:All of them bland and uninteresting. The directors were probably trying to spice up the show by making them angry and depressed all the time. Oh joy. Maybe for one episode, but not for an ENTIRE series.Overall:If you really have nothing to do, watch it. But only as a last resort. It certainly had some unique ideas, that probably could have made a very interesting anime. Alas, the directors failed to do so. In case I haven't made my point across yet, this anime was dull, bland, etc. because about 11 of the 13 episodes consisted of the characters whining and complaining and just being annoying. 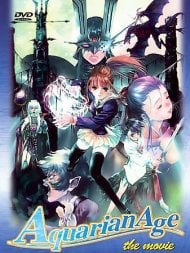