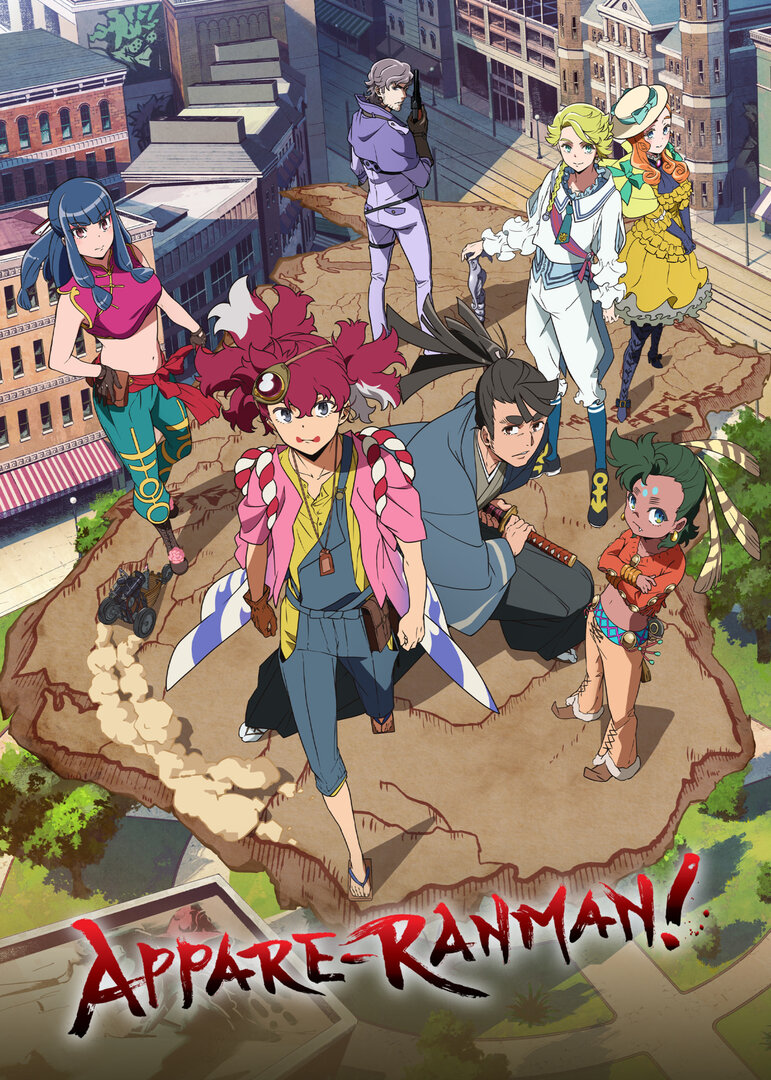 I don't think that this show was as good as it could have been. It went from being a racing anime to a battle shounen. So I think switching the genres and wasting the potential of the characters kind of hurt the show in my opinion. SPOILERS warning to readers since this review will be covering the details regarding story and characters that felt disappointing.

Story- The story deals with the Trans-America Wild Race that the characters eventually enter. Prior to that event, Kosame and Appare were sort of forced into a situation where they have to work together to win the race to get back to Japan. (But that's really more Kosame than Appare to be honest in regards to going home.)

I don't mind opposition if it helps a story move forward, but introducing Gil into the story changed the anime from a racing genre to a fighting genre. And a genre shift may not be something anime watchers will want to see.

Then there is the part with Gil, the mystery villain and mass murderer gets defeat in battle completely with the ‘if you kill him you’re as bad as him’ line, the 13th episode enters some real hack territory. In the last ten minutes of the show, we see the final moments of the ‘Trans-America Wild Race’ we assumed would be the whole point of the show but maybe lasted a culmulative 10 minutes throughout its 13 episode run.

Appare wins in a photo finish moment with absolutely none of the build up that would make it impactful. After, the viewers are treated to some forced melodrama in the form of Appare being sad that actual Samurai Kosame is returning to Japan even though he’s got nothing to do in America, only to find that early 30s Kosame stayed behind to hang out with teen Appare some more.

Animation- The animation being one of the better parts of the show, I like how each of the characters had a different designed car. You can sense the effort that was put into the character design as well as the background design.

Sound- The sound has some variety to it. It helps that Evan Call made the music to the anime, since he has also made notable OSTs to other anime. https://myanimelist.net/people/32281/Evan_Call

Characters- The characters definitely had some potential, but ultimately fell short. And I feel like the director was juggling too much at once when he should have had someone else handling the script instead.

There were actual ideas with the characters that could have been something if handled right. Such as Hototo’s indigenous ancestry, the discrimination against Xialian for her gender, and Kosame’s past causing an internal hesitance to act, these just weren't handled well with dignity. These were just details that were thrown in with their characters during the introduction.

Gil is just that antagonist that is just there as an obstacle. He is unpredictable and believes that power is everything, but if I had to make a comparison, he's an uncharismatic, boring version of Shishio from Rurouni Kenshin.

Appare was okay as a protagonist at first, but when you see how the writer had make the character adapt to the changes in the story, it doesn't feel organic.

Overall- The show had potential, but Director Hashimoto bit off more than he could chew. And I think changing the genre did not help. PA Works can definitely have ideas for anime, but how they execute the ideas leaves a lot to be desired. But maybe the disappointment isn't as bad considering that Great Pretender did pretty well as an original anime, and they both came out the same year.

If you really want a true racing anime, I would definitely recommend Redline. Or even the Steel Ball Run manga. Appare-Ranman on the other hand is an anime that I can't recommend to others.

This is going to be fast unlike this shows slow ass "race" show. now a couple disclaimers it'll be spoiler free and pretty quick and that's because I got to epsiode 8 and seriously couldn't finish it.  I'll say that if you don't feel motivated to watch it after 3 episodes then drop it, there are certainly better shows to watch this season and a plethora of other non seasonal shows that are better.

first animation, it's not bad but incredibly inconsistent which is really all I can say, animation has gotten way better this past year (despite the coof) so when a show like this flops on certain scenes  it's hard to not point and take notice.

sound is fine, music I don't really remember but it's not bad. But the world feels empty a filled city street and bars sound almost empty and that's bad.

the characters are lame, they do nothing to keep me watching band when the story isn't compelling  good characters are essential. on top of that I watched it in English and for a show based in the US it's one of the few times in watch dubs. The Japanese (for the first episode) wasn't bad but the English was so stale and phoned in it really staled the watch. And a again some of the characters are just terrible.

the story? Uhhh guy wants to get home and kid wants to build and race shit. Well It's not compelling especially since the guy could just work a job the time he was there and gotten home faster and left the boy. There are a bunch of stories for side characters but some of the arcs are written so bad.

i try not to dump to hard on shows but I would say it's not worth it. Just go watch redline or any other classic easing anime. Or Ford v Ferrari they are much better

The show starts out as Wacky Races (a tv-series that was broadcasted in 1968 including the goofy characters and cars) but the direction of the story starts to change a couple of episodes in. It was a change that I didn't expect but one that I really enjoyed. There are a few moments that feel a little too dark for the show but I guess it's to make the viewer aware that we're not watching the race portion of the show anymore.

Appare-Ranman!has a very colourful and unique look to it, the animations aren't bad either which originally made me think that the production might have been a little too good for a simple Wacky Race's themed show.

All the characters on the show are extremely colourful and each character has some awkward quirks that don't make much sense at the beginning of the show but once the show starts to mix things up it all starts to make sense.

I wasn't a huge fan of character designs itself since it feels out of place compared to the rest of the setting but it all does come together in a pretty decent watch.

So underrated! Appare-Ranman is definetly not groundbreaking, but it was a fun watch that I really enjoyed overall. The tone and plot shift halfway through was a bit jarring, and I'm a little sad we never got to see the race pan out properly, but what happens instead was still enaging and I really enjoyed it. Aside from Appare, none of the characters really grabbed me, but they didn't need to. This is a show you watch for the aesthetic and concept, as those are the things it does really well. It's not paticualarly deep or meaningful, but it's full of personality and a really fun colour pallet. Solid 8/10, felt like something was missing but I still really liked it!

Really love the story. Like how they have been able to make do with what they could get and was able to make some friends and hope that they would win so they could go back but also able to keep in contact with their new friends.