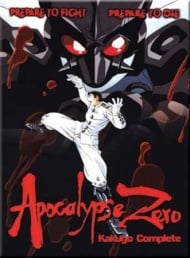 In a post-apocalyptic world ravaged by earthquakes, grotesque monsters and powerful demons run rampant through the streets of New Tokyo. Only a select few people have been trained in the techniques necessary to defeat these creatures. Brothers Kakugo and Harara Hagakure not only possess the skills, they also harbor the power of the Zero Armor containing the souls of thousands of warriors. Separated from his brother, Kakugo roams the land fighting in order to restore some sort of peace and safety to mankind. However, he finds these monstrosities to be merely pawns to a much larger adversary from his past, who may prove to be his most dangerous opponent of all.

StoryYou’d think I’d have learned my lesson by now that anything Chii recommends that is followed by “bwahaha” is a *bad* idea. Firing up Apocalypse Zero on a whim after an indirect recommendation, I knew it was going to be bad; the first scene opens with a bespectacled guy wearing nothing but his glasses and a loin cloth whilst battling a deformed bear in the midst of a snowstorm. What makes things worse is that the show only goes downhill from here. Set in a future world one may call apocalyptic (hey, maybe that’s where the title is from!), humankind struggles to survive against an onslaught of deformed beasts and monsters. Luckily, panty/beast-slaying/geek man is on hand to protect the virtue of a selection of poor, downtrodden students that struggle to attend school on a daily basis. Why kids need to brave the ferociously wild plains to attend a reasonably pointless class is beyond me, but I digress. What is more important is that our mostly naked hero Kakugo, aided by his super armour formed from the spirits of previous warriors, battles against various creatures that come in various forms of “so unsexy it’s sexy”. Using various protrusions and inventive excuses to molest their victims, these monsters are unforgettable if nothing else. When I say unforgettable, what I actually mean is that images will be burned onto the back of your retinas for a long time to come. Take for example a large lady with enormous breasts, a spiked thong and a protruding “panty beard” that crushes young women whilst playfully seducing young boys by eating their faces. If that doesn’t float your boat, then maybe a wrinkly old man in a loincloth, whose penis turns into a giant snake will. Twinned with these over the top monstrosities is a fair amount of gore; skin is graphically flayed from flesh, blood pours from every orifice as a body is brutally crushed and special moves cause various necessary organs to exit via the mouth. Elfen Lied has nothing on this puppy. Take a moment to overlook the onscreen grotesquery, and there is actually a tale of betrayal, ambition and family ties. Sadly, the writers are far more concerned with making Apocalypse Zero as sickening as possible to devise anything cohesive, and thus the two-episode OVA resigns itself to the realms of laughably trite.AnimationIt is not often I feel that I could do better than a trained artist, especially in anime. An exception to this rule is Apocalypse Zero: a show that makes anything with Go Nagai’s name attached to it look like a Rembrandt creation. Facial proportions vary from frame to frame as most time and attention seems to have been focussed on either saggy boobs, vagina dentata or a tribute to Scanners with numerous exploding heads. The graphic bloodshed becomes a yawn-fest, as severely mutilated corpses drag themselves along with the vague hope of salvation or shards of ice penetrate the bodies of unsuspecting guards.  For the age of this OVA, the backdrops are surprisingly detailed and use an appropriately drab palette to emphasise the abused landscapes. However, my main visual concern is for that of Harara’s gender; addressed as a male, the enormous breasts and svelte body made me think a transgender operation could well have been involved in the intensive ass-kicking training...SoundApparently, there were opening and closing tracks – I can’t say I noticed. With the frequency and intensity of the onscreen antics, something as inconsequential as background music is easy to overlook. Surprisingly, there are some big names amongst the seiyuu, including Cowboy Bebop’s Kouichi Yamadera. Subtly sexy and always commanding, Kakugo’s voice actor is certainly able; however a terrible and cliché script makes for awkward delivery, even from a seasoned expert. With a wailing banshee voicing the lead female, each cast member turns out as unintentionally amusing as the next.CharactersTaking the centre stage, Kakugo is an exceptionally unlikely hero. Looking more akin to a basement dwelling geek than a traditional hero, the guy sent to save the day is blessed with a rushed history that leaves the viewer feeling somewhat distant from the main character. There is no full explanation as to the whys or wherefores of the siblings chosen to save humankind, and as such their aloof attitudes make them difficult to sympathise with. Wearing the pants of “overall bad guy”, Harara is the dark half of the Hagakure brothers. Large breasted and featuring feminine, manicured nails, the evil freak doesn’t so much strike fear into the heart as make you wonder why on earth you bothered to even start watching. What pushes Apocalypse Zero into the category of “so bad, it’s good” are the numerous villains. Although they have no real motivation, development or realistic killer moves, the protagonists serve as the highly flammable fuel that makes the show burn brightly as god-awful entertainment. For example, a busty demon nurse seduces three young penis-tongued youths, only to dispose of them as they begin to think with the wrong heads. Crazy? Yes. Funny? You betcha!OverallLaughably bad, Apocalypse Zero should be watched for exactly that reason. If you thought that Hanappe Bazooka had the most creative storyline, or if Akira left you hungry for more graphic violence, then this is definitely a show that will definitely give you an interesting point of reference. Just prepare for the worst and settle back for a show that may make you think twice about the cutesy, moe reputation bestowed upon Japan. 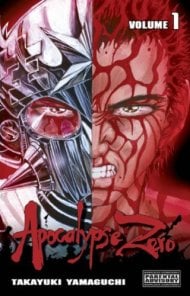 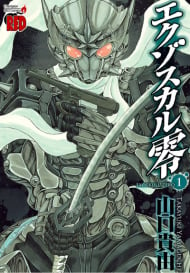