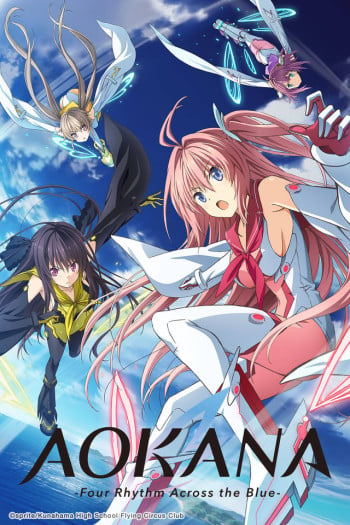 Girl first day of school, challenges someone to a competition.

But wait i reckon 'the girl' has never done this before..... and miraculously wins!! WOW

There will be a character that used to do this competition. But in the past something happened and they dont do it anymore, or something like that.....

Oh wow same story as everything else woo

Look, if you're looking for an anime with a deep and rich story with relatable characters, you're in the wrong place. But for a mindless fulfillment of time, this is an "ok" substitute for boredom.

ao no kanaka no four rhythm is a really good anime I highly recommend it!!

but the tags say there it is romance were is it I want romance!!!!!!

*My first positive point of AnK is the world that was created in this anime. It was somehow refreshing to see an anime that doesn’t take place in a normal high school in a normal town. The world of the archipelago was a welcome diversion from that standard. Now it was a bit of a shame that the animators didn’t use the world more. A beautiful archipelago like that could have delivered many opportunities for amazing backgrounds with equal amazing art style. The anime does take place in the sky most of the time so I kind of understand that the animators gave less attention to the land than to the sky but still this was, in my eyes, a missed opportunity.

*Next positive point was one of the characters that we meet a little later in the anime being Inui. She was by far the most interesting character in the entire anime. She was one of the few, if not the only character that had some layering in her personality. And also here I found a missed opportunity in the anime being that it was a shame that we didn’t get to know more about Inui, about her past or her reason to pursue FC. Remember that because it’s not the last time that I will say something like that in this review.

*And with that, unfortunately, everything positive about this anime has been said. The main reason for that is that AnK was so incredibly stereotypical. Let’s take a look at the storyline of this anime for instance. We have a main character, in this case Kurashina, that is extremely clumsy and seems not fitted to do any kind of sport. This character than sees a sport for the first time and decides to try it. And at the first try this character pulls of an incredibly difficult move and from then on proceeds to kick everybody’s ass. Now where have I seen this storyline before? Oh yeah, in pretty much every other anime or series that has to do something with sports. The entire storyline of AnK from episode 1 to episode 12 was predictable and unoriginal.

*And the stereotypicalness doesn’t stop there. The main character is trained by someone who used to be an expert in the sport but has quitted for some unknown reason and now is kind of adverse towards the sport. Well in AnK we have Hinata who fits this profile like a glove. It seems that Hinata was a great FC player in the past but now he doesn’t even fly anymore. It’s only because Kurashina keeps nagging that Hinata takes up FC again as her coach. As I said a perfect example of this stereotypical kind of sport’s anime character.

*Let me continue about Hinata for a bit more. We don’t get any backstory for him. The only thing we know is that he used to play FC when he was younger. But on the reason why he quitted FC we are left completely in the dark. And more about him is that Hinata is superflous in this anime. If he wasn’t in AnK, the story would have progressed in the exact same direction. He isn’t worth the title of main character.

*This problem of no backstory can also be told about the teacher Kagami. She was an amazing FC player in the past and even developed her own kind of FC which seemed to be almost unbeatable. Who was she? What is her FC story? So many things that we don’t get to know anything about in this anime.

*In stead of that we got this stereotypical and predictable anime that didn’t excite me at any point in time. The entire storyline, the side stories, the FC battles, the characters, their personalities and everything else was way to predictable, way to stereotypical and just way to boring.

So as a conclusion, I think I just made my point clear. I can watch almost any other sports anime and receive the same storyline but with more excitement than in this anime. And that’s why I’m going to rate Ao no Kanata no Four Rhythm at 2,5 stars. I’m not going to go as far to say that this was a waste of my time but it was definitely not the most exciting anime I’ve seen in the past season.

SPOILERS: But an important thing to read before you watch this series.

The Male MC does not fly for more than 2 mins in this Anime - He coulda been a bad ass but isnt. If you are looking for a strong MC who is thought to be weak this is not it.

Great Anime but misleading - The MC is the pink haired girl and the ex-competitor is a coach - Nothing more. Just a coach.