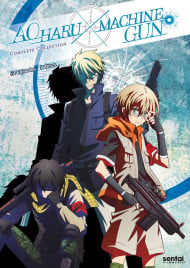 When Hotaru Tachibana storms into a host club to avenge the honor of a wronged female student, the last thing Hotaru expects is to duel the club’s most popular host with airsoft guns instead of fists. When Masamune Matsuoka’s experience wins out over Tachibana’s brawn, he realizes that he can use his victory (and the large bill for damaging the club) to make Tachibana join his struggling Survival Gaming team. However, what ladies’ man Masamune totally misses is that his unwilling new guy… isn’t a guy at all! Under the boy’s clothing and strong need to defend justice, Tachibana is all-girl, but, for a number of complicated reasons, she absolutely CAN’T expose that fact to Masamune or his teammate, the erotic manga artist Toru Yukimura. Blood will boil both on and off the airsoft arena, but it’s not over until the last round is shot in AOHARU X MACHINEGUN!

This review is based on the first five episodes and will eventually be updated when the season is complete.  Aoharu x Kikanjuu is about a high school girl who dresses like a guy, and lets everyone believe he is a guy, joining up with a perverted manga artists and a host club guy in survival games. At first, it does feel really similar to Ouran High School Host Club. A girl dressed as a guy enters a place and destroys something. In return, she has to join a group to pay back the debt. However, after that, it's different. Actually, it's still different from the beginning. Hotaru is known as a boy at his school. Apparently he is the class president at his school so it's not like he is a nobody. The students would know he was a she if that's how he identified himself. Apparently, only a friend of his knows he is a she. At the same time, he doesn't seem to be trying to hide it and does seem to identify as a girl. I hope they clear it up soon because it's rather confusing. Anyway, she goes to a host club to beat up the guy she thinks took her friends money. Instead, he challenges her to a survival game with toy guns (thinking she is a he). Hotaru loses after damaging some of the property of the host club and is forced to join Masamunes team for survival games to work off the debt. However, Masamune doesn't allow girls to join his team, so Hotaru is forced to keep the fact she is a girl secret. Later she meets the third teammate, a hentai manga artist who doesn't trust others easily. In time, the three become good friends, but Hotarus debt is paid off. She leaves the team, only to come back, this time by choice. Together the three aim to be the best team in survival games in Japan.  The anime takes a bit more serious tone than Ouran, although it's comedic at times still. It's also a continuous story, unlike Ouran where almost every episode can exist seperately or even be rearranged without losing much. Also, at least currently, the teammates don't know Hotarus secret.  The animation style is different from Ouran too. Unfortunately, I'm no expert in style so I can't really say how.  The story jumps a bit and some things don't make sense, Like Hotaru being the class president and having plenty of time to play survival games or how they seem to have so many practices but Hotaru isn't an adult like the other two and has to go to school at some point. Whether Hotaru just prefers to dress as a boy or if she prefers being identified as a boy is unclear too. She seems to be identified as a boy at school, but she used the girls changing room and she wants to tell the guys she is a girl. Of course there is plenty of time to explain all this. It's only on the fifth episode. There are supposed to be unanswered questions.  I enjoyed watching it and I'm dying for the next episode to come out. I couldn't take my eyes off of the screen for five whole episodes, partly because I had to read the subtitles, but also because it was interesting. Then again, I enjoy gender bender shows and there is actually some action in this one. It's not all action, but survival games is more action than a host club. People are shooting at each other, even if the bullets are fake. As for those thinking this is a reverse harem or will be, it's not impossible, but in my opinion, it doesn't feel like one.  The sound is fine. The characters are fun and the relationships are interesting. Overall, it's a good show so far. Hopefully it stays that way. I am giving the story a 7.5 because the gender bender part about Hotaru is confusing and the jump in time in the beginnig was a little annoying. If Hotaru is explained more and the story continues to be just as good, I will probably give it a highter rating later on. The 7 in sound is just because it's not particulary great but it's not awful.

I enjoyed everything but what got me most upset was when she did not tell them that she was a girl they just left it at that. i makes me pissed. but overall everything else i saw in this anime. i really enjoyed it.

I dropped this anime on episode 3 for a lot of reasons and these are some:  1- its remind me of Ouran high school but in disgusting way - I adore ouran-  2- I cant stop thinking that the mangaka wanted to write an shounen ai manga but the editor said no... 3- their jokes aren't funny at all  4- when main character talks about herself as an absent she makes me angry (?)  5- THERE IS NO REASON FOR HER TO DISGUISED AS A BOY !! 6- I hate games and stories about game are even worse 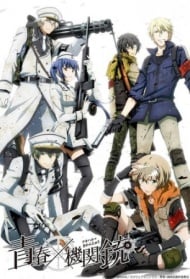 Aoharu x Machinegun: This is a Battlefield for Beasts! 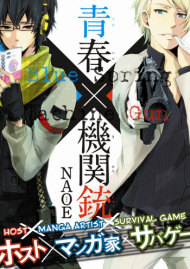 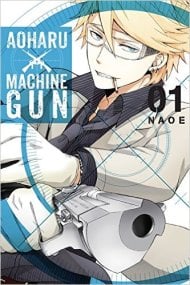