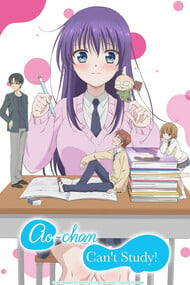 I wasn't a real fan of the show and it felt I was watching a shittier version of Yamada's First Time, which is a show I rated a 3/5. The animation style wasn't bad, probably say it was above average but the main characters felt rather flat. It also didn't really work in the shows favor to be released in a season with Miru Tights, We Never Learn, Why the Hell are You here, Teacher? and Araiya-san! Ore to Aitsu ga Onnayu de!?. Not that the other shows were mind-blowingly good but Ao-chan Can't Study! just didn't really do anything to make itself stand out at all. The sad truth is, I was struggling to remember the show when people were asking me what I was watching and I'm pretty sure I won't even remember this show in 6 months from now.

On the surface, Ao-chan Can’t Study looks like an indictment on the uselessness and general creepiness of the Baby Boomer generation, mainly because Ao-chan’s elderly father, a renowned author with tons of erotica novels under his belt (among other things, heh), is so obsessed with the state of his daughter’s virginity and how he can help her lose it. But take a closer look and you’ll find that – yes, while Ao-chan’s virginity is still the main focus of the show, Ao-chan gets a little more agency and realizes all by herself that, yes, despite her father’s intentions, all she really wants to do is fuck. But Ao-chan is a studious girl and a virtuous girl and a pretty sheltered girl too – I mean, if your horniness is the thing that’s distracting you from studying, then there are plenty of quick, easy fixes to resolve that little issue by yourself, know what I mean? But in the spirit of what this show thinks is comedy, Ao-chan takes the roundabout approach instead and attempts to solve her problems by blaming practically everybody else for her virginity. Hey, how’s that for a gag, huh? This exhausting push and pull within Ao-chan – who’s that boy, I really kinda wanna fuck him, how does one go about fucking him exactly, no wait I actually want to study, EEE KIJIMA’S SUCH A HENTAI GROSS, etc. – is the thing that gives life to this show’s humor. Ao-chan taking the initiative and beating the boy of her affections to the metaphorical punch makes her a tsundere of the reverse kind, and so, lends the show a new level of wit I wasn’t expecting. In short, Ao-chan thinks her crush wants to fuck her, gets all grossed out by the idea because she’s a virgin, then gets all intrigued by the idea later on, until finally, she decides to drop the pretense (and her panties) to try and fuck him herself. For science. Of course. And also because she might like the guy back too. Of course. It’s a very complicated thought process that gets sorted out easily in just under 15 minutes per episode and thank God for that. The humor can get tiring, and you’re never gonna root so hard for a couple to get together like Ao-chan and Kijima, but believe me when I say that this show’s greatest strength is that it knows how long it should run and what to cover in its limited timespan. But (oh yes, you know there was a but coming, especially for a show like this) this is, in the end, still an ecchi show, and so, gets so wrapped up in all the sex, that it forgets it was trying to be witty about the sex in the first place. It’s legitimately funny sometimes, but it’s also mainly crass, immature, and juvenile. Which is such a big shame, really. Too bad Ao-chan’s stupid daddy had to go cockblock the fun and ruin things for the rest of us. [This review was made for the Anime-Planet Secret Santa 2019 event. That OP? A hidden gem. But be careful not to get so sucked in to it, that you get duped into finishing all 12 episodes just to hear it over and over again.]

It was a little cringing and weird when I first started watching it. Definitely thought it'd be a little bit wholesome, but after getting through a couple of episodes it kinda grows on you in a weird way, it's okay. The jist is the main character (Ao) main goal is to get in a university and live on her own away from her perverted dad ( who is a famous exotic writer ). But after a boy named (Takumi) show interest in her during class, she started to get weird prevented thoughts ( most likely from the influence from her dad) about this boy thus keeping her from studying AKA the title of the show. In my opinion the show was okay. Definitely perverted and not a show for everyone. But if you like shounen, romance comedy I'm not gonna judge. 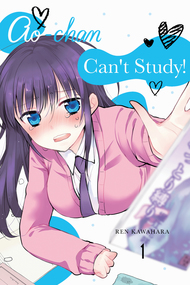 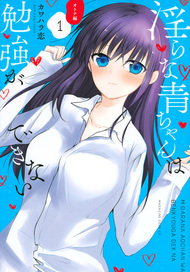