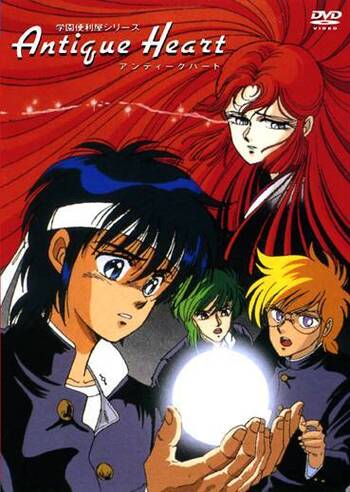 This is a very brief review. If you like supernatural anime, than check this out. Takahiro, Toru, and Tadashi are the Handy Boy Club, in which they basically do odd jobs around the school for some kind of compensation. There is an old school building on the grounds that is going to be demolished. The Handy Boy Club decide to clean up the old building. In the old building Takahiro meets an apparition named Saki. Takahiro discovers Saki's relationship to the old building and it's his cause to stop the old building from being demolished with the help of his friends. The school jocks want the building to go down and they are his obstacle. There is also a recurring dream that Takahiro has of a teddy bear he owned as a child that he lost. The rest is for you to discover in this short ova. Bascially this is about the life and soul of things. The story is nothing special. The characters are not developed. It's very simple. The animation is not the best, but I would not call it bad either. I liked Saki's character design. The sound was the weakest aspect of this show. Just not good at all. But there is so little that it's not bothersome. If you just want to watch something to kill time and happen to like supernatural anime than give it a look.