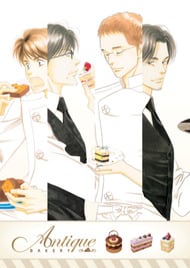 Tachibana has recently quit his job at a high-class firm, and for unknown reasons, decides to open a bakery. His first employee is Ono, an extremely talented patissier who is also known as the 'Gay of demonic charm' - something that has caused him to lose his job countless times. Joining the crew also is Eiji - a retired champion boxer - who is hired on the spot as only a trainee purely because he is not Ono's 'type.' However, Chikage, the bumbling childhood friend and shadow of Tachibana, is exactly his type! Now, with the shop finally open, everyone seems to be filling their positions well; but one question remains: what were Tachibana's motives for opening the bakery, and does it have a link to his troubled and forgotten past?

This is one of the first anime I've seen handle homosexuality in a realistic way. Instead of being a flimsy excuse for pretty boys to be together, it is actually shown in context within our society and is shown from many angles. The characters seem so real, and the animation is beautiful. It is funny and beautiful all at the same time. I felt so satisfied by the end, and just wish there was more of it.

Story: I'm usually not a shounen-ai fan but I'm a sucker for food. Therefore, I tried it with the hope that nothing would be too explicit. I was pleasantly surprised. It got me instantly hooked with an intriguing background, food, comedy, drama and did I mention food. I has humor which is light but still funny. The drama does get heavier toward the end of the series but nothing too over the top. There is romance but nothing hot and heavy. The pacing was nice with a really nice ending. It had a complete feel to and I liked the journey. Some things were predictable but there were still some plot twists. Overall, I really enjoyed. It was super exciting but it had a nice flow to it that made you want to keep watching. Animation: At first the 3-D threw me off. However, I began to like and I think it gives this series a different feel. I really liked the pastel colors. It reminds me of Honey and Clover which I find pleasant. I think bright and bold colors wouldn't really fit. The details on the dessert was terrific. It made me really hungry. The characters were distinguishable from each other and had great range of expression. Sometimes movements were a little awkward but overall the animation was really nice. Sound: I loved the song Life Goes On and it variations throughout the series. It was amazing how that one song could fit so many styles and moods. It really connected the series. However, the other tracks weren't nearly as memorable. They were good and fit for the most part but I don't really remember them. The seiyuus did a terrific job though. Characters: Great development for both the main characters and even minor ones. You really felt for these people. They were given backgrounds and weren't simple cookie cutter models. They were also likable and the relationships between them were solid and strong. A great male cast. I don't want to give off too much but they have a down to earth quality about them. You see their flaws but their personality makes up for it. Overall: A great series. If you're usually turned off by shounen-ai, I still suggest giving this a try. I like the way relationships were done. Also if you're a foodie, this will definitely appeal to. It's a great series that I wouldn't mind watching again. Especially if I'm craving something with food. 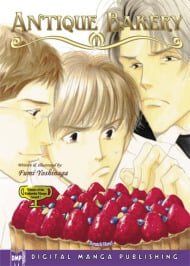