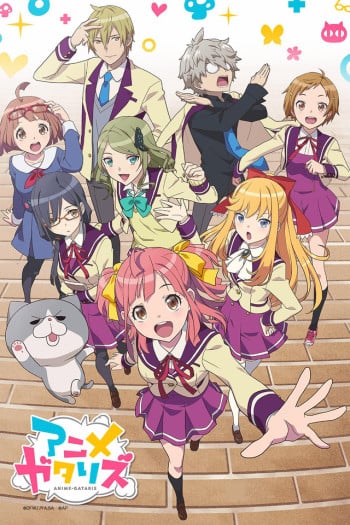 Both anime are about a school club thats into anime, manga, cosplay ect and follows both clubs around and their otaku shenanigans. Although Genshiken has a more “realistic” approach to it and is actually set in college rather than highschool.

Kyoutarou Kakei is a shy student at a prestigious academy known for its massive library. The sole member of the school’s library club, Kyoutarou’s always been better with books than girls – until a text message from the mysterious “Shepherd” hints that his fate will soon be changing. Life gets wild in a hurry after a vision allows Kyoutarou to rescue Tsugumi, a beautiful girl who also received a text message from the “Shepherd.” Soon, Tsugumi announces her intentions to join the Library Club and, with Kyoutarou’s help, make school life much more interesting! It doesn’t take long for a host of other pretty girls to follow Tsugumi’s lead and join the club in the hopes of spicing up their boring academy lives. But just who is this “Shepherd,” what does he or she have to do with the Library Club’s sudden popularity, and how in the world will Kyoutarou survive being surrounded by all these girls!?

The girls are forming a hula club as in the Hulaing Babies anime, but the new coronavirus disease (COVID-19) has halted further club activity. The anime will outline various preventative measures against the virus.

The president of the "Astronomy Club", Di Qiuren, leads the members of the club to track down aliens, but they have been unsuccessful so far. What Qiuren doesn't know is that all of the members are aliens. On one side is the alien stalker who never gives up, and on the other side are the aliens disguised as members of the astronomy club! In order to conceal their identities, the aliens try to learn and understand the behavior of earthlings. A funny school life with them and Di Qiuren is about to unfold.

Ken Kubo is a normal man with a normal job who is besotted in a normal way with a female friend. But life turns distinctly abnormal when he meets an otaku, Tanaka, and is indoctrinated into the obscure world of anime, model guns, and garage kits. As Kubo finds himself shunned by those he cares about, he becomes only more determined to evolve into the ultimate being - the Otakuking! But Kubo is not the only one coming to terms with society. While he strives to mould the world into a perfect haven for people like him, otaku all across Japan are laying bare their strange, lonely lives for the first time… and it’s not a pretty sight.