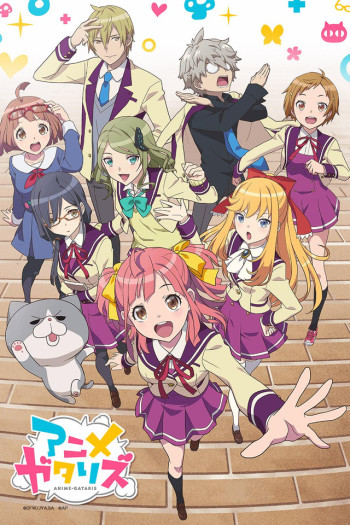 I thought this was a pretty good show, so I wanted to go ahead and add a review providing some positive notes and defense of the series. I think it deserves some more attention, and hopefully some of what I mention will help some people who are on the fence about watching it after seeing it's current rating on this site. I'll remain vague about some specific aspects, but the review won't be entirely spoiler free. I started watching this show because I am a sucker for series that center around the mediums I like, gaming and Anime. If a show is about characters doing something that I also do, or can do, like playing card games, board games, video games, or in this instance, watching Anime, then I feel more of a connection with it. It's something that is replicatable, and makes me feel more involved. While I do tend to find fantastical series more interesting, and what not, there's nothing wrong with something a little more down to earth. I think that's why I ended up liking this more than I thought I would. As those two concepts tend to come together at the end, and the line between reality and Anime becomes pretty blurry. Starting off with some of the more basic things, I think the OP was one of the best of the entire Winter 2018 season, and even the ED started to grow on me there at the end. It definitely had some nice music. In terms of art and animation, it was okay. Nothing too bad, nothing too good. As long as nothing looks too wonky, that's fine by me, I generally care more about the content than the appearance. Beyond that, the first major thing that drew me in were the various references. I've always had a mindset of "what if something was named this, instead of this." I've always considered opening a competing chain of stores with a similar name to something that already exists. Stuff like that is amusing to me. So, seeing various Anime being referenced with a different name is always welcomed, and it's not as if this series was the first to do that, but it had some good ones. Some of my favorites from this were: Ru:ZERO, Fresh Princess of Tennis, and A Reindeer in August. As we progressed, I found the discussion and criticism about Anime to be extremely interesting. I liked how we could use Minoa as an excuse to get a lot of geeky and techincal discussion about Anime. From seeing the characters attend an Anime convention, and talk about the different aspects of fandom, to centering more on the creation of Anime itself. It's always neat to be able to see a behind of the scenes of how things work. So getting to a point in the series where they attempt to create their own Anime, and we get to see the different processes that go into the completion, from the art, the music, the voice acting, and so on all the way to completion. I enjoyed it more than some of the other series in the past couple years that have attempted to break that process down. But, the first thing that really impressed me was the resolution of the problem introduced in Episode 1. I didn't actually expect them to figure out what the series that Minoa was looking for was. Lately it seems like a lot of these one cour shows don't allow themselves to end. They reach for another season, yet they don't get renewed so we get this show that just hangs there with no, or even worse, half a resolution. I actually prefer short stories that give us an ending. Not that epic stories aren't interesting, and if done right can be phenomenal. However, there's nothing wrong with embracing a one cour limit, and I believe this series was successful because of that. It definitely wouldn't work as well as two cour, and hopefully they won't try to force another season. It's good as it is. In regards to the ending, from the beginning of the series, it sold itself as being self-aware. I also didn't really expect anything to come out of that, despite getitng some leeway from the audience. In the end, going full on alternate world in the final two episodes was probably the most interesting thing they did in the entire series. I was pretty taken back as things were getting wonky and crazy, and I didn't expect them to fully embrace it. I thought it was just going to be a disappointing one episode gimmick. Yet, it wasn't, furthermore; I think it came at the right time in the series and was executed pretty well. It transitions pretty well between thinking Minoa is simply succumbing to chuuni-ism to the realization that more is going on. All in all, the series has some nice points to it. There is a lot to be taken away for those who are new or veteran to Anime.

*spoiler-lite review* Give yourself to the anime Animegataris is a series that's going to get swept under the rug. You know by watching it that it's a boring slice of life about an anime club and that's all it needs to be with its underacheving artstyle and animation. By all means there's nothing special about it so there's no real need to watch it, besides its reference-heavy narrative for those of you that like shoutouts and its commentary on the anime industry every once in a while. Besides that it trips over every trope imaginable into a pool of muddy grey.  The situations in the story the characters get into aren't intreguing in the least so the only thing keeping the story scored where it is is the weirdness. Just imagine you're looking at the most boringly shaped cloud in the sky you've ever seen. Then right as you're bored and are about to look away the could shifts into the shape of a burger king logo for a second then disperses. That's animegataris, but less entertaining and completely forced. I won't spoil what happens but basically it tries to do something different and WEIRD too close to the end and falls completely on its ass trying to do it because there's no reason to care about the characters or what's going on even remotely at all, but you've gotta give it props for trying all the same. The animation is consistant, that's all i'll say. It's not noteworthy at all. The Sound is charming as long as you're just listening to it but it's nothing to the show itself. The opening is ok and it's very self-aware. References are another thing. Like, I get that in a show about anime itself you want to callback to popular anime but it seems like this show doesn't even want to stand on its own as its own seperate thing because literally every other line is a reference to another, probably better, anime. the only funny joke the anime has. A few of the characters had potential but none of them stepped up besides the weird glasses guy. Then there was this godforsaken stuffed rotten peanut that they said was a cat, talking like it knows whats going on all the time and they think its SO funny they shove it into the camera every second and make it say some stupid shit that you never wanted or needed to hear. It does nothing for the story at all and it's the stupedist fucking thing of all time, it makes no sense, but then again neither does the resolution so fuck it why bother. Mediocre 4th wall breaks, pointless characters, unconvincing story, In the end it's not even worth watching for its insane story twist and i'd reccomend avoiding it altogether if you don't feel like sitting through 10 episodes of lameness only to get 2 episodes of outright cringeworthy stupidity.

Very interesting premise, but it gets very meta toward the end, and perhaps goes a bit too far in that direction. 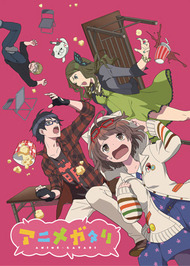