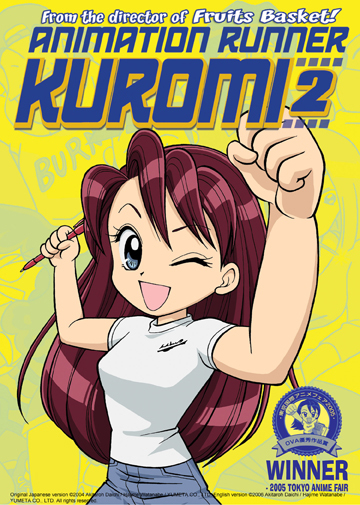 We have several anime about making manga and videogames but up until recently none was cetralized around making anime, as is Kuromi-chan was. Shirobako may have stolen the spotlight, but not the historical importance.

Kuromi-chan is a two-part OVA around an animation studio during the production of a series. A girl there is suddenly given the responsibility of making sure the projects are completed in time and thus begins a long procedure of running around, begging, threatening, double-checking and learning stuff along the way. I found myself surprised at how much plot was offered in such a short amount of time and around a rather simplistic premise.

To be honest, the anime doesn’t feel educational or an eye-opener to all those who are into anime for several years. Its context appears to be common knowledge amongst veterans. I say it works better for newbies who are not aware of how anime are made behind the scenes. And I mean the traditional hand-drawn method and not that fancy computer-based we have today. It was a lot harder to have smooth animation and good colouring back then, along with other problems, such as time and budget restrictions. Plus, the animators themselves were not really doing it for the money as much as a hobby. A painful, time-consuming one. They were in constant need to be supervised and all that need for some poor fellow to run around daily and check out progress, quality during in-betweens, do the transports of the drafts, check out the inking, make sure the studio and the higher-ups are not displeased, and some stuff more. All that may seem trivial but I had never seen them before or even after in any other show with such speed and passion. There is so much running and anxiety in this show that you really end up feeling this is all SERIOUS BUSINESS and even cut the animators some slack if you find jerky animations in some anime you like.

That is what in effect makes this anime a good watch. Not only it is the only one that deals with all the common problems any traditional studio faced, but it also does it with a lot of passion and speed, without neglecting to flesh out its cast a bit. The characters don’t remain soulless machines, working passively on a project; each one is presented with his or her own set of quirks and problems that may stand in the way of his or her work. Kuromi herself begins as a rookie who has no idea about all these problems and slowly along the way gets wiser and more efficient in her work. Heck, there is also a side story about a woman who wants to stop smoking thrown in there. As well as the illness of an animator, the memories of a famous anime, hopes, ideals, dreams and passion. And all of that in around the duration of a normal movie. What else do you want?

The production values are not great in any way and I guess they don’t need to be for such a show. It is basically slice-of-life around animators and doesn’t include romance or fan service. Thus I was not displeased with the rather simplistic character figures or the lack of cinematics. I still got to like the characters for their silly looks and mannerisms. That is why I gladly recommend this oldie to anyone who missed it. It has stuff to teach and still remains entertaining without lasting too long to tire you.