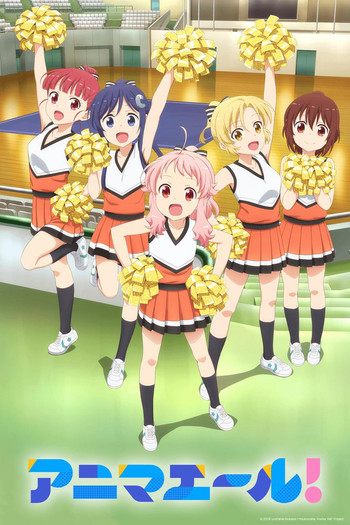 This show was the biggest surprise for me in the Fall 2018 season. I hadn't even noticed it until several weeks into the season and then it instantly grabbed my attention. Initially, I gave it a watch since it was produced by Doga Kobo, a studio that's been responsible for a lot of my favourite shows in the CGDCT (Cute Girls Doing Cute Things) genre. I will admit that some of their recent shows haven't impressed me, so I wasn't sure what to expect with Anima Yell! The fact that the story revolved around a group of cheerleaders gave me pause for thought, as well. I'll just say straight off that this show was a real gem.

Kohane Hatogaya is a first year high schooler who has an epiphany to pursue cheerleading after watching a local cheer squad perform. One of the girls from that squad would cross paths again with Kohane and we begin the journey of the Kaminoki High cheer squad. Along with the challenge of having a squad where over half of the girls are complete newcomers to cheerleading, the girls come face-to-face with what it means to each of them to cheer.

It was so hard not to get positive vibes from this show, and I loved that the story was realistic without contrived drama or unlikely physical feats that you see so often in sports anime. The girls were never going to become overnight cheer champions performing impossibly difficult stunts, but that just goes hand-in-hand with the theme of the show: It's not the scores and the difficulty levels that matter - love what you do and support those around you and you'll be rewarded with more than trophies.

It was pleasing to me that it was Doga Koba who put this show together. You could tell they didn't have a big budget to work with, but they made the most of it. The character designs were excellent as was the voice acting. The real gem of the show for me was the soundtrack. Both the OP and ED were full of energy and the insert songs were fantastic. Special shout out to the cover of Love 2000 in episode 8.

Anima Yell! is one of those shows that doesn't have a story that shoots for the stars. We all know that if you do your best, and love what you do, you'll be a winner even if you don't have a shiny trophy or title to show for it. That's certainly not an uncommon theme, esepcially in a sports anime, but Anima Yell! shines because of its sheer positivity and good vibes. The cast of characters are all likeable and adorable which is not as easily achievable as one might think for a CGDCT.

It's cute anime girls do X part 2,473, it's a SOL where they are cheerleaders what more is there to say? There also isn't to much dumb manufactured drama like most SOLs have. If you are getting annoyed by episode 3/4 then drop otherwise sit back and relax it's a chill show. Time for the quick review

sound is okay.  music is good but other than that everything else is pretty empty

and the story ummmm why is this here? Anime girls cheer boom, mind blown? So was mine

I remember watching this anime when I was starting to find interest in anime! It was so cute and awesome, I use to watch it everyday and enjoy it. I reccomend this anime to people if you love cheerleading or cute stuff (this anime is for kids too so perfect for kids who are starting anime) Spoilers!! This girl trying to achieve her dream of becoming a cheerleader is so great which I can never do.