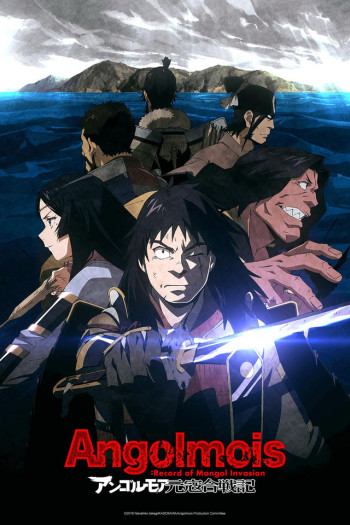 If you're looking for manga similar to Angolmois: Record of Mongol Invasion, you might like these titles.

Mugen is a rough-around-the-edges mercenary with a killer technique and nothing left to lose. Jin is a disciplined samurai who's as deadly as he is reserved. Fuu is a young waitress with a good heart and a resourcefulness that emerges when you least expect it. These three unlikely companions are about to begin a journey that will change all of their lives. It's a dangerous quest for a mysterious samurai that will see our squabbling group of heroes get into and out of trouble more times than they can count (which admittedly, isn't very high). From the cynical gentility of the nobles to the backstabbing of the Japanese underworld, Mugen, Jin and Fuu will face threats from without and within as they hurl insults and throwing stars alike. Ancient Japan is about to get a lethal dose of street justice—Champloo style. And it will never be the same.

— She is a girl with a bright smile on the battlefield. With her silver hair fluttering in the air and dark eyes, the girl sprinted on the battlefield. Her name is Olivia, whose hands is stained with the blood of her enemies as she shows an innocent smile. The deep knowledge and combat techniques of the entity who called itself a Death God has been branded onto her body. On Olivia’s 15th birthday, the Death God suddenly disappeared. Olivia enlisted with the Royal Army and started fighting in the war as she searched for clues. Lunar Calendar Year 998. The Kingdom has suffered consecutive losses to the Empire aiming to conquer the entire continent. The innocent girl who lacked common sense will step into the battlefield as the “Strongest Chess Piece” of the Kingdom, and go down the path of a hero—！

The blade arts of the "Devil" tasked with stiking down evils threatening a peaceful Edo! Heizou Hasegawa, upholding the role of chief officer protecting against crime and arson! In 1783, the heart of the Tenmei era, Hasegawa held the office of chief director of the department charged with sustaining safety in the region, suppressing the most vile of thieves and criminals, an individual largely feared, renowned as Devil Heizou...