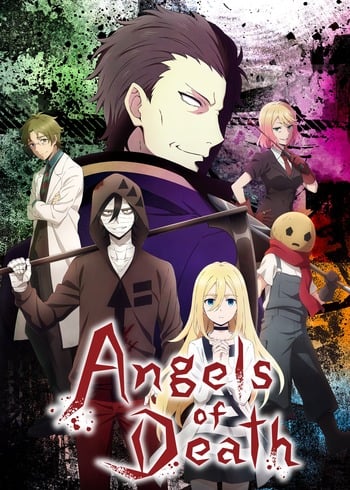 These series both have the same psychological interest.

The purpose in both TPN and Angels of Death is escaping the place they're confined to, and both animes were also simliar in the fact that knowing their allies and their foes was never a certainy. Both animes had interesting plot twists, and were a perfect length to keep entirely invested, although I can't wait for more TPN anime to be made.

i feel like these anime's have a very similar vibe. I can't really explain it but they do :)

they both have character's who's main wish is to escape.

SPOILERS!! The two anime, have kind of the same plot. Theyer may not come to see the real world, there is a lot of difrent too, but theyer just a little a like. And both anime stops the same.

Both anime showcase young children trapped. The two anime also present the exposure of kids to death, whether it be their own demise or that of a close friend or a family member. I highly recomend watching these two. Although, in some ways similar, they are by far very different.

If you like one of these there’s a decent chance you will like the other. In both shows the characters are stuck in a building they are trying to escape from. There’s a little bit of humor in both but they mainly have dark themes such as murder and violence. Angels of Death is a little bit more serious.

Both animes are about dark and twisted games where the protagonists are constantly and danger and it is kill or be killed.  Don't see what else there isn't to love

Both stories are very abstract and involve gore and murder. Main characters are teenagers that are stuck in a fantastical and traumatic environment that leaves them in a survive or die set of circumstances.

It has secens that are very similar to the game show and some puzzles in Angels of Death (but does them way better). It is also a little bit edgy if you like that too.

Main characters are both - blonde girl and a guy with a scythe. Both anime have lots of action, fighting and the dark world atmosphere.

They are quite different, but what they have in common is a building that main characters are trapped in. Mystery ( trying to solve a murder/ the reason they're in that place) and fighting for their lives whilst they're in danger.

The only similar thing they have is going through different levels of hardship. In made in abyss 2 main heroes are going deep down in the abyss, with every level of depth bringing more challenges. And in Angels of Death 2 main characters are going up with the elevator, stopping in each floor and fighting some enemy in order to go higher.

The characters and the mood of the anime sorta reminds me of this series.

ZL was a bit more straight forward to follow with their plot, and a bit more light-hearted.

Both anime are mysterious and psychological. Main character is smart, but emotionless and very monotonic. Satou and Gray have the same voice actor Houchu Ohtsuka.

Enma Ai seems like an ordinary girl, but in reality she is Jigoku Shoujo: Hell Girl. If you live in Japan and hate someone deep down, she will take revenge for you, at a price. Access her website at midnight and her services are yours, but in exchange you will spend an eternity in hell once you die. After the events with the reporter Shibata, Ai and her assistants Ichimoku Ren, Hone Onna and Wanyuudo are back to their duties of ferrying more souls to hell. Only this time, they are joined by a mysterious girl named Kikuri whose intentions and nature are completely unknown...

Both of the shows dive deep into the horrors of the mind.

The characters are all have a type of horror to them whether it is dealing with trying to kill one another or use another in a bad way.