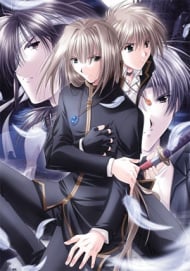 StoryOh lord.In my endless quest to add as many things to the AniRec, I picked up Angel's Feather. Not only is it a short OVA, but it's also shounen-ai - a genre which usually means no one will add it unless I do it myself. I guess there's one silver lining on the cloud: at least it was only two episodes.See, the title "Angel's Feather" is actually incorrect. I have good authority to say that the real title is actually "BOS Feather" (bag of shit feather), as nothing that is good and pure would have such a putrid stench to it. Folks, this is about as generic as it gets. It's like the creators were brainstorming one day and had a conversation something like this: "So we need something shounen-ai, and I'm afraid the usual "all-boys high school" idea just won't cut it on its own.""OH HAY GUYZ I HAVE AN IDEA LOL!!1! Let's throw in light and dark angels, and have them fight each other!""Whoa, awesome idea! But let's make sure to also have a magical world somewhere around there so we can pull out an easy explanation about where the hell the angels came from."Sound familiar? If you've seen Angel Sanctuary, X TV or a number of other series you've seen this. The only difference is, like many shounen-ai titles, this one is fairly relentless as far as proving the adage that if you are at an all-boys school, every single guy will be attracted to each other...right?!Angel's Feather fails on basically every level as far as the plot goes. Not only are the ideas completely laughable (characters suddenly discovering they are a bad guy, and then of course, two friends end up fighting each other for no reason EXCEPT THEY HAVE TO!) but the execution and pacing is utter garbage. In addition, once the last half of the second episode rolls around, so many random characters are introduced that you really lose any idea of what's going on. At that point, a frontal lobotomy seemed like a fantastic escape from reality, to say the least. AnimationIn hilarious shounen-ai-gone-too-far style, random upwards panning shots of shirtless characters were the norm. Besides the cheesy goodness, the character designs were quite pretty and bishounen, and the angels were well done. Though, Angel's Feather suffers from the same scenario as many bishounen series: many of the characters look identical, and it's difficult to determine who is who.But hey, if you were really wanting to watch Angel's Feather specifically for the cheesy-ass gene bonanza transformation scenes, then you are in for a treat.SoundUtterly forgettable in every way, Angel's Feather is filled mostly with random piano tracks. Most of the time, however, no songs accompany the OVA. The outro song is incredibly silly. CharactersAngel's Feather has a varied cast of characters who all look the same, and all are worthless and uninspiring. The only time that any relationships seemed to matter is when someone would die, and their lover would get upset. The only semblance of character development, in my opinion, was of Shou and his brother Kai - BARELY. Otherwise, no one has enough stage time to be considered important. Thrown in a billion random characters in episode 2, and you have a confusing and awkward ride. OverallHELLO TERRIBLE. There is essentially nothing redeeming about Angel's Feather, except the pretty characters and the occasional blood. The plot is terrible, the character personalities are terrible, character development is terrible, and if you choose to watch this OVA, you are terrible for not having any common sense. Stay. Away.

Story: 0This isn't an exaggeration to make a point, nor personal distaste. I want to be absolutely clear here, the story is absolutely garbage. While I'm sure some lunatic at the studio thought they had a plot (though I hope not). .. There isn't one. Angels are good, devils are bad basically, and they become angels and devils just all the sudden without any -reason- to know, or to be attacked or to fight one-another or. . .frankly the only think about this story I can piece together is all the ways it fails. Think of something a story must have, -anything- other than a good guy and a bad guy, and this pathetic excuse of an anime doesn't have it. Indeed it was only by utter suffering myself I finished two episodes of this trite garbage . . . since I was close to suicide after only one. Animation: 7 Just because I want to put a number over 3 in here I will only look at the actual artwork of the main 4 or 5 characters and backgrounds while still (can't even remember how many were supposed to be the main ones >.>) and its rather good. Very colourful and pretty, would have been actually fairly good for an anime really, but for this one it was just wasted. I can't help but wonder if a handful of artists with absolutely no ability to write aren't responsible for this anime OVA and planned to get some writers on staff after it (though it doesn't look like that plan worked either). Furthermore, the animation part of the artwork was rather shoddy. Sound: 2 I somehow doubt any of it was even original, none of it fits together, none of it is good, I give it a 2 just for not subjecting me to nails on a chalkboard like I somewhat expected to fit the quality of this anime. Characters: 2 Completely flat, ruled by an utterly nonsensical division of good and evil, transparent trials and.... Gods I cannot even finish this. .. They’re all just bad, very. .. Very . . . very bad. As I once told a friend of mine "Thank god you're pretty". Besides, what's with the way they speak? Is it just the subs, me, or do they speak in a really, really, really awkward manner, even for Japanese (from a U.S. resident's point of view naturally)? Overall: 1 I don't. .. I don't even know what to say about this. I watched it only because it was listed shounen-ai and because it was first alphabetically of what I hadn’t seen but. . . I feel dirty. Seriously, I've seen porn with better stories. Actually, the only yaoi hentai I've seen had a rather good story to be honest, so even that isn't a proper insult to this....trash. Furthermore. .. It insists upon itself. It has absolutely NO plot or point. . And it insists upon itself. ... I just don't understand. And at two episodes, it tried to shove so much crap in. . . . What's worse the last episode ends with suggestions they'll continue. Thank heaven they did not . .... When the book closes, and you see the picture of the four, which is the ONLY moment of this show worth seeing. I took a bloody screenshot of that for my wallpaper folder. . and wish that photo had been my entire experience with Angel's Feather.

So I was in the mood to look for a shounen ai anime... I thought... I need some love dove between men and fanservice... with a good story too. Oh an Ova... and I began to watch Angel's Feather. AnimationGuilty... the first thing I considered was the drawings, the design of character is attractive... but very cliché too. So there was a little fanservice with a shower scene, licking lips and unnecesary caresses.... BUT not a freaking kiss, neither a rape/sex scene... well maybe it really was just shounen ai... At least the battles and the fanservice were good. Story Well the story is quite interesting.... BUT its just a little taste of an overall story that its probably in the game. =/  So you'll see the OVA and say... WHAT? Its that all? And yes it was... sorry for everybody who were expecting some man on man action. SoundBoring... probably you can notice too that every shounen ai series or Ova have a similar soundtrack... tries to be erotic and hentai but really uninteresting... CharactersSo there's just a bunch of sexy men... and a cute girlie guy. Everyone has a power but nothing really extraordinary. Still I would love to have one of those as a close friend. If you don't have anything to do... and want to see a bit of  this game animated this serie is for you... if you found boring other shonen ai series just keep going.