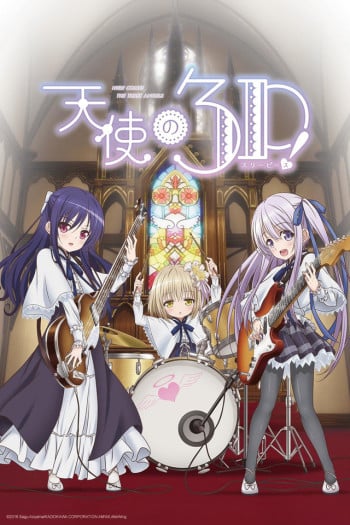 The first two episodes were off to a pretty good start for me; I'm a musical gear nerd and musician/mixer myself, and I really loved the way they focussed on that. I thought this would be a sort of K-ON!, cute girls doing cute things with a focus on music. But that focus changed pretty quickly, making it a very bold loli-fanservice show. The overall plot that they kinda touched on in the first episodes pretty much disappeared to the background, only giving you the generic slice-of-life/iyashikei episodes. That isn't necessarily bad, but they could have done more with the direction they were going in. Also the loli-fanservice is pretty disturbing at times, and that's coming from someone who usually doesn't really mind ecchi. This show just tries WAY too hard to cater to only a specific group of people, if you get my drift. Just a pretty weak story overall, feels like they weren't sure which direction to go.

The characters are not that memorable, but just okay. Nothing you haven't seen yet.

I liked Ro-kyu-bu better, which this is basically a spiritual sequel to.

Just fine. It's a bright and colorful artstyle, and they were able to portray the girls in a pretty cute way. I think they used a bit more detail than most other series like this would have, but it's not really something special. BG art was just good. I liked how detailed all the instruments and musical equipment was drawn in the first few episodes, even though they removed most brands, I could instantly recognise specific model numbers.

I personally really like the very upbeat, very J-rocky style of most of the music that the girls performed. The OP and ED were pretty sweet as well. Some of the music they played however, doesn't really seem to fit the 3 little girls; some of the tracks are pretty heavy and complex... It's completely unrealistic to be able to play at that level so young, but it's just a story I guess.

The voice acting is pretty good, just nothing unique either.

This may be a kinda weird review section to you, but I usually rate a serie by overall feel/experience: for me this means a series doesn't necessarily need to have the most high-end animation, complex story or most unique characters to still make an anime very enjoyable or memorable to me.

The atmosphere wasn't really that strong here, this anime doesn't have a very unique or special feel to it. It's just pretty generic. Most of it came from the performed tracks and OP/ED. Not very memorable, just kinda enjoyable.

Enjoyable if you can get past the loli fanservice, pretty cute at times, the music is quite nice ( the ed is awesome ). I liked the VA, they did a pretty good job portraying the characters, the story is simple but it works, i didn't really get bored while watching this anime. Most characters are likeable ( Sakura best girl ). The animation/art is awesome, not at the level of a Hibike Euphonium for example but it's still nice to see.