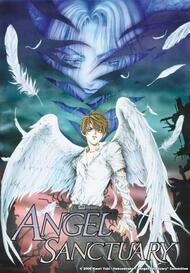 Setsuno Muda is a high school boy with a cruel fate, trapped in a forbidden love for his blood sister and inhabited by the spirit of the Organic Angel Alexiel. As the final battle between Heaven and Hell approaches, and forces gather against him, he must soon make decisions that will inevitably alter his future for better or worse. But for poor young Setsuno, his anguish and torment might be more overwhelming than the blood on his hands, as conflicts are settled and lives are changed forever...

StoryHaving sat through three episodes of what should have been an epic, exhilarating, and provocative series, I can only dredge up the following reaction from the depths of my numbed soul: uh, lol? At first glance, Angel Sanctuary has an interesting premise involving forbidden love and religious themes - not to mention all the fan art and screenshots on the internet, which give the impression that it will provide some great eye candy. In reality, Angel Sanctuary is cheap and corny and has a bewildering sense of pacing; just like watching a train wreck hurtling off the edge of a cliff at full speed, everything happens too fast for the brain to make any sense of it. I can only imagine how many scenes and side plots must have been pruned from the original manga to create this ultra-rushed nonsense. What's worse, after being bombarded with scene after scene of confusing tripe about angels and reincarnation and blood that makes you immortal, not only did I find myself losing interest in the ending, but so did the creators! Angel Sanctuary comes to a halt just as events are about to take a ‘serious' turn; although, I get the feeling I've merely been spared the worst of what it had to offer.AnimationWhilst undeniably attractive for its day, there are also several contemporaries which look better than Angel Sanctuary (X The Movie being one such example). Moreover, when compared to anything more recent, Angel Sanctuary has no chance of looking remotely attractive; it suffers from inconsistencies in character proportions, and motion is generally crude and simplistic. This is just another example of the entire budget going into making things looks pretty rather than making things look real.SoundWith a fairly decent opening and closing theme, the real let-down comes with the nondescript score and generally average Japanese voice acting. Even worse is the American dub, which is downright disgusting.CharactersAlong with a rushed plot, Angel Sanctuary also displays some of the worst characterisation I've seen anywhere. I don't remember once having a good grasp of what these people were about, why they were doing what they were doing, nor why I should care; the best Angel Sanctuary ever provides is ‘bleeding heart' flashbacks seconds before a character loses their life. What is most tragic is that, with much better direction, some of the more original characters could have been genuinely engaging; for example, Kira Sakuya's disturbing past and his relationship with his father sparks some superficial interest but is not explored in enough depth to make any emotional impact.OverallThere is only one reason why I or anyone else, for that matter, would pick up Angel Sanctuary: the novelty of witnessing incest as a plot device. I say this because there is nothing else apart from that to make it stand out from the other lumps of shite floating in the sewer of mediocrity. Even so, I wish I hadn't bothered - I find it laborious to watch and even more laborious having to find the words to describe it.

Story I am a huge fan of this manga series, so naturally, I was excited to see the OVAs made from it. Honestly, I was shocked and appalled. The story is very, very complicated, but to sum it up: Setsuna Mudo is in incestuous love with his sister Sara. He is also the reincarnation of an angel who fought for the 'evils' and rebelled against God, Alexiel. Trouble starts when two demons show up trying to reawaken Alexiel in Setsuna. Their meddling puts both Setsuna and Sara in very dangerous situations. They stumble upon a plot hatched by Katan to resurrect Rosiel, the insane twin brother of Alexiel. Still, Sara finally confesses that she is in love with Setsuna and they run away together. Unfortunately, Setsuna cannot escape from those who want him dead AND those that want him to awaken, and in the heat of the moment, Sara is killed. Setsuna of course freaks out, recieving Alexiel's powers without reawakening her memories which causes massive shockwaves that destroy the world. In the rubble of the aftermath, Setsuna decides he will venture into Hades and the lands of the dead, chasing Sara's soul in hopes of bringing her back to life. And that's it. The OVAs end right there. Let me stress the fact that the manga series, written and drawn by mangaka Kaori Yuki, is 20 volumes long. The OVA made an attempt at shoving the first three volumes into these 3 OVAs. Obviously, it went wrong. Very wrong. It is impossible to shove a story this intricate and complicated into 3 OVAs. I hope the developers have realized this at the present time and do not attempt to do so again. Animation I'll be honest, I hate the art in this anime. It may just be a matter of preference, but I find the characters are far too angular for my tastes. Their facial features seem off-kilter, and there is just something about it that makes the viewer uneasy. The proportions are off, most noticeably in the characters' faces... The eyes are drawn to far up on the faces, causing all the other facial features to be drawn too far up as well. This leaves unnaturally large and sharp chins.  I don't think that the artist put a whole lot of time into this, and it had devastating effects... I thought all of their eyes just seemed dead. Oh, and Rosiel always looked like he was half asleep with his lids half-mast. Pity, really. Sound All I will say about the sound is that the voice acting is terrible in both English and Japanese. The characters sound bored all the time, and even in high energy situations, their tone never changes. It's something of the robotic: "Oh no. I am falling. Ahhhh." They get excited about it as much as I do when I'm scrubbing the toilet or mopping the floors. Characters This is where most of the damage lies. Setsuna is an idiot, Sara is a ditz, Kurai is confused, and Arachne's just kind of... there. The relationship between Katan and Rosiel is far more intimate than what we just saw in this OVA. Some characters have even been cut out altogether. With these characters gone, it is never made clear why the whole damn series is CALLED Angel Sanctuary! There is a reason! It's not just pretty words! Ruri Saiki is gone, leaving Sara friendless for the most part. Kiri is not there to shoot Sara. They have someone else do it and leave her out all together. Kato, who becomes a major character later on, is at least given a name, but not anything more. Ruri did die off very quickly, but she was a major plot device the OVA left out. My main problem is with Rosiel. Yes, he is a favorite character of mine, so naturally I pay more attention to him. You don't really get to see anything about him. You never really get a sense of how absolutely out of his mind he is. Yes, he does have a fixation on beauty and being beautiful, but it's been so grossly disproportioned that he comes across as an insecure drag queen. In the manga, Rosiel was more of a attack first, ask questions later kind of guy. He's also conniving, shrewd, and brilliant. He manipulates everything and everyone around him to get what he wants. Basically, he's so badass that he has become one of the characters whom girls want to have his babies. (Well, at least I did.) The OVA has no attraction for me at all. None. My poor Rosiel... Overall My final thoughts: this OVA series might be entertaining if you're stoned. If not, I suggest you stay away from it. However, if you like deep, dark, and twisted stories that keep you guessing and addicted, I highly recommend the manga series. It's very long and a bit more complicated, but it beats the hell out of the OVAs by far.

Angle Sactuary is an interesting anime that spans 3, 30 minute episodes based on a longer manga series. From reading other reviews people who have read the manga dislike this a lot more than people who haven't but they ultimatley dislike it as well. However, i liked the anime a lot as it was a simple concept with great characters and i really got attached to those characters and sad when people died. The voice actors and sound effects were not the best as i am guessing they probably had a smaller budget than most anime but apart from that the anime is a short, but sweet anime and would recommend to anyone who enjoys darker anime and doesn't mind blood shed and sadness. 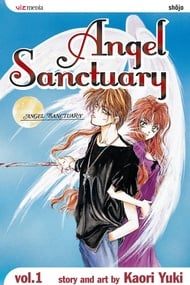