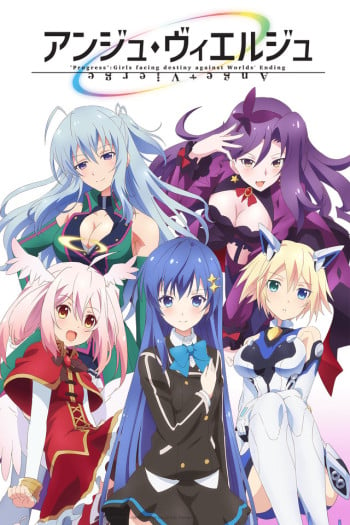 Girls with powers, saving their world all while trying to do school at the same time. Check em out if you enjoy these kind of things.

Uzume Uno was on her way to class one day when a stranger dropped a mysterious device into her bag - and it’s no ordinary device! The middle school student soon discovers that she can use the cards within the device to summon five gorgeous dolls to fight for her in card battles with others! What adventures await this would-be card master and her new, loyal dolls?

Both anime consist out of a group of action girls surounding another non-action girl and focusses their little personal conflicts. While providing some action scenes. Fantasista Doll is the less fanservicey one while Ange Vierge is aimed at a more adult audience. But series have similar qualities in animation and story telling.

Both shows are about a bunch of girls who kick ass with their powers to save their world while doing school stuffs. Both shows you'll see a lot of bathing and blushing. Fans of one will likely enjoy the other.

On a spring day when the cherry blossoms have started to fall, the naïve princess of a small country, Lion begins her days at a school in Hokkaido. The school houses a special facility run by ALCA that trains Logicalists who protect the peace of the world. Lion has a lot of unique classmates in Class 1-S, including Nina, a Logicalist. This is the story of the energetic and adorable days the Logicalists-in-training spend together. It’s time to Trance!...