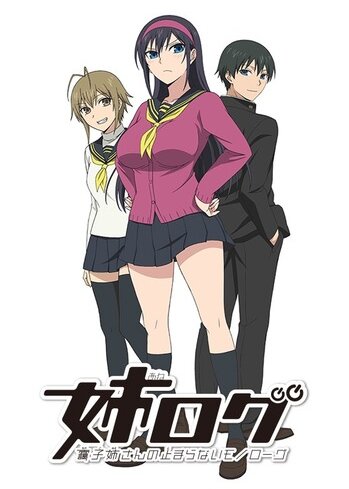 Both animes feature female protagnist with wild imaginations and they are very likely to get the wrong idea when it comes to love. B Gata H Kei has an Ecchi twist to this unique idea. Both are comical and I suggest either or if you're looking for a cute, but funny anime to watch!

Ever since Hikaru's sister started middle school, life around the house has been uncomfortable to say the least. For his cute little sibling, Fuuka, went through a massive growth spurt, making her exceptionally tall with monstrous breasts to boot. What's worse, the girl is determined to have her beloved brother take her virginity and have a baby with her! Will Hikaru manage to keep his busty sister at bay long enough for her to graduate to high school?

According to Futaba, Hitoha has the softest cheeks in all of Japan and loves nothing more than fondling them like a luscious pair of mammaries. However, when the youngest sister wakes up one day with a pimple on her face that bears a startling similarity to a breast, it’s not just Futaba that gets swept up into a frenzy. Meanwhile, Mitsuba has met her match in the form Miku's old exercise machine and a brand new balance ball...

Satoshi Yabe is the newest employee at Kamohashi Elementary School. Wide-eyed and enthusiastic, he’s thrilled to finally be fulfilling his dream of being a teacher – but little did Satoshi know that he’d be assigned to class 6-3, a group that houses none other than the violent and perverted Marui triplets! Between the girls trying to hook him up with the busty school nurse, dealing with the unfortunate consequences of a hamster named 'Titties' and other misadventures, Satoshi’s dream of an uneventful school life has come to an end!

The lives of the Marui triplets remain as hectic as ever, both at school and at home. Mitsuba continues to battle with her weight, even using Futaba as a makeshift dieting machine, all while attempting to keep a hold of her reputation and status within the class. Meanwhile, Hitoha’s adoration for the Gachi Rangers remains as strong as ever, though she’s finding it increasingly difficult to escape occult freak Sakiko. Finally, amongst the rampaging antics of his students, Yabe struggles on with his own issues, particularly in his non-existent relationship with the clumsy school nurse, Kuriyama. With panties flying, Futaba’s breast fetish raging, and the triplet’s suspicious dad causing embarrassment to his daughters at every turn, there’s plenty left in store for the girls and their long-suffering teacher.

After leaving Canada to move in with Haru, Rei was finally getting used to living as the youngest of four brothers, and Haru's new café was beginning to thrive... when their mother, Haruko, showed up and said she was taking Rei with her to Switzerland! The shock of her sudden declaration just when Haru and Rei had begun to grow closer led to increasing discord between them. Is more trouble on the horizon?!

Akito Himenokouji and his twin sister Akiko are close - in fact, maybe a little too close for Akito’s comfort, as his sister has an unrestrained brother complex! Though her brother doesn’t take her lustful feelings seriously, Akiko is determined to set the record straight with the other ladies around him, including the three other beauties that live in his dorm and want the boy for themselves. Every morning, noon and night, the girl continues her mission to cross the line with Akito, and she won’t let any girl or sense or morality get in her way - for as long as there’s love, it doesn’t matter if he’s her brother!

What do you do when you live together with gorgeous twin sisters who are intent on seducing you? This is the daily dilemma that faces Keita Suminoe, and politely declining their offers doesn’t seem to be helping him! Despite his school friends' jealous quips, and parents who think everything is fine as the siblings are not blood-related, this makes no difference to the brow-beaten boy. Unfortunately for Keita, school entrance exams are just around the corner, and scantily-clad girls sneaking into his bedroom at night is starting to affect his chances of graduation. Can he focus his mind in time, or will breasts, panties and milky-white thighs prove to be too much of a distraction?