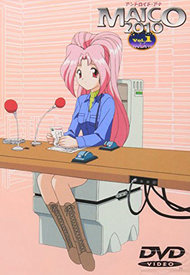 Who is MAICO? She is state-of-the-art in android technology, a Multimedia Artificial Intelligence Computer Organism, and the host of Japan Broadcasting System’s latest primetime variety show, JUMP OUT MAICO 2010! With an insensitive director with one mega-hit in 15 years, a highly experience technical team, a talented writer inspired only by others’ misfortune and massive pressures from corporate executives and sponsors alike, what kind of adventures can the staff have? What lessons can Maico learn from them? And what is MAICO’s true purpose?

FIRST IMPRESSIONS This is a minor title, made by an equally minor studio named Animate Film. Their only above average work was the Guyver OVAs so don’t expect too much out of them. The director is Masunari Kouji who has some nine minor retro goodies under his wing (Photon, Read or Die). He laso has some other flops in his roster, so his talent is a hit or miss. STORY SECTION The setting is a new radio station show in 2010, which has a rough start with the ratings. Somebody there comes with the weirdest idea. “Let’s bring an android as an announcer… and let’s make it look and talk like a pretty girl. This way it will attract many listeners.” It sounded quite ridiculous when I first heard it. Stories with female androids (or gynoids for a more accurate term) are almost a genre of their own; but this one felt original. A robot radio announcer? Why does she need to look like a girl if nobody will see her? The reasoning was there; she was to appear in public later on and get all friendly with the fans. Still, the story was nothing much to begin with, as it turned quite soon into stand-alone episodes around every-day problems in the station. Plus, the conclusion was the usual “genre-jump from funny to serious” episode that tries to leave us with a good last impression. Ok, it is a comedy and it doesn’t need to have an awesome story to begin with. The good part is that the scenario was not just an excuse for comedy. The humor was relevant to the story. It is not interesting but it is not bad either. So, it is a half-good job. ART SECTION The level of animation is average at best. There are not any brilliant visuals or special effects in it but the colors are appealing. The characters seem to be standing still for too long and their grimaces are rather lukewarm for a comedy. This is not really a minus, as they reacted more realistically this way. The graphics are nice to look at, without ever becoming eye-catchy. The only thing that makes the visuals deserve more than 5 is the several mechanical jokes about the female android (body parts, limbs taken out, cables showing, etc.) SOUND SECTION The level of sound is also average. The music themes are silly tunes in the background and the sound effects are mostly squeaky noises. Even voice acting is just nice. Again, the only reason I find to give sound more than 5 is the recording sounds the sound manager uses all the time. He himself never speaks but uses various recorded sounds and words to express his opinion or to censor any nasty words that some people mention live on the show. CHARACTER SECTION Maico, the leading gynoid, was interesting for her robotic behavior. She acts like the usual anime bimbo (gentle behavior, shallow thinking, naive thinking) but all is excused as part of her programming. You actually listen to her CPU working before reacting to something in a clichéd and yet apathetic way. There is also the sound director of the studio, who never speaks and just responds with sounds and recorded phrases. He is another interesting character. There are other funny minor characters, such as the director who keeps losing hair because of anxiety and a crazy guest star who likes to shave men’s eyebrows and draw mustaches on women. In all, there are many funny characters but none of them is really hilarious or memorable. Just like the story, they are half-good. VALUE & ENJOYMENT SECTION Sure, it has several comical moments. Yet again, it never goes too far. It never gets hilariously funny, the pace of the story gets stale after awhile, and the conclusion felt out of place. It is a truly medium series to watch. Then again, I must say that it was party slice-of-life and not pure comedy. I just happen to find slice-of-life to be completely boring without some extra spice in the background. SUGGESTION LIST You won’t believe how many anime with gynoids there are. Some half-good anime are: Azusa Will Help, Rizelmine, Metropolis, Hand Maid May and Steel Angel Kurumi. If you want something with substance, there are also: Chobits, Key the Metal Idol, Xenosaga (the rpg; not the anime), Ghost in the Shell and Battle Angel Alita. 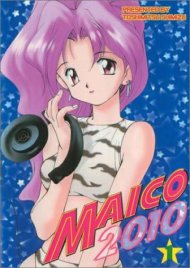