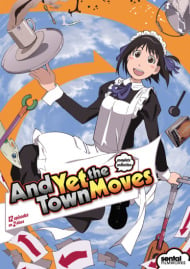 The best way to enjoy this anime is to be a fan of either SHAFT shows or a fan of wachy episodic comedies. If for example you demand a story with a plot, evolving characters, or artsy visuals ain’t your thing, then you better not head this way. As far as SHAFT works go, this one seems to look a lot better, with a lot more actual animation and a lot less bizarre imagery and real life photographs that border hollowed pretentious nonsense. The camera does all sorts of motions and the sequence of scene transition is almost frenetic, while occasionally zooming in to cute faces and naughty female parts of the body, which is SHAFT’s trademark and recipe of success. It is a fine way to help the viewer visualize how awkward and troubled the minds of the characters are, and to spice up the jokes. They even try to change the formula as the episodes move on, from slightly changing the gimmicks to even adding more info about one’s inner self. There is still weird imagery, symbolisms, and trademark punch lines, albeit in a lot less degree than in, let’s say, Sayonara Zetsubo or Arakawa Under the Bridge. I must say that makes the characters to feel a lot less like caricatures defined by a few sentences or personality gimmicks. At the same time, I must also say that the cast of this anime is a lot less memorable because it does not follow a theme in its setting. Although the first episodes will make most think it is a comedy centering on maids in a maid café, after awhile it becomes just random shorts of practically anything the characters do in their everyday life. With this in mind I say that although Soredemo is a lot more down to earth than most comedies by the same studio, at the same time it also lacks something to make it distinguishable amongst any other similar show. I am not a fan of episodic comedies and in most of them the characters start to become boring fast without some development. When that happens it is the theme of the setting that can keep me interested for more and in this case there is nothing to pay attention to. The whole maid café is nothing but a minor element (perhaps yet another troll joke by the producers) so you end up looking at random people doing random things in hope of laughing. They are the usual “unusual” bunch of misfits and typical of SHAFT most of the humor is based on their total lack of common sense that helps the jokes to work better and the characters to be memorable. As usual, their appeal is mostly based on quirks and bizarre personality and not character development. They may not have punch lines (at least not lines that remain for more than a few episodes) but are still quite simplistic as personalities and basically all follow some archetype. I am not saying the comedy is bad; it’s actually very good in overall; but the interest drops considerably without a hook to keep you interested for more. I can even say that you start to get used to the jokes and that their volume of boldness drops a lot later on. It becomes tiresome after awhile. Something similar can be said about the music. The music score is funny and artistic but not memorable for any given reason. Voice acting is very good in overall although at times you feel like some actors are not as passionate as they should be. Especially for the main heroine who seems to scream 90% of the time yet her actress is just trying to make her sound as stupid as possible. In all, it is a good comedy but it definitely is not going to be remembered for most, plus any continuation of the same setting would be pointless since the humor has already run thin and there is no theme or development to excuse another season.

Well this show was enjoyable but it had some issues like the Direction was unique but it wasn't for me and the characters are quite good but some characters are just idk what to say for them. The anime changed its course midway like it went from a slice of maid cafe series to a sci-fi supernatural anime and that's where i found it bad well it was good but i would really prefer to watch 2 to 3 episodes a day and not binge watch the series

Story To make it short, there is barely a story worth to be speaking of. Arashiama-san is apparantly planning to become a High School Detective and in one episode actually solves a rather simple case, but other than that there is nothing to that story line. Tatsuno-san is having a crush on Sanada-kun and hence starts working as a maid in the place Sanada-kun regularly visits (due to him having a crush on Arashiama-san) and even tries (but fails) to invite him to a movie screening, but that's about all the development made there. Those three would make rather fair material for a love triangle, but that possibility wasn't used in the slightest. Another strand of story was started in the beginning where Arashiama-san wanted to make the maid cafe she is working in more popular, but after a few episodes even that was completely forgotten by the creators. They started a few things but did not bring any depth into them, not to speak of getting any of those things done. However, this is supposedly a comedy, so I'm not going to weigh the lacking story too harshly. Animation and Sound Overally there is nothing much to complain about here. That being said, there is also nothing to be praised, either. Of course, the fact that the characters are often in the same 3-4 places could be interpreted as lazyness, but I won't because that's just how the Anime is. What I really didn't like, though, was the opening. Usually I listen to the opening of an Anime every episode, even if I don't especially like it. Here, however, I started skipping it after the third or fourth episode because it was on my nerves so much. Surely, music is a matter of taste, but I really disliked the opening. And the opening is a rather important part of every Anime! Characters None of the characters has any depth. This is a comedy, so that wouldn't be a problem. But for some reason none of the characters has any trait that is outsticking enough to make them likeable. Heck, they did not even include popular stereotypes! Well, yes, Arashiama-san is clumsy and during the first episodes that was cute, but for some reason not even that worked in the later episodes. The character I liked the most was the narrator for he actually had something smart to say every now and then. And I sympathized a little with Moriaki-sensei who failed to make Arashiama-san understand maths. But even for a comedy, that just isn't enough. Should you watch this? If you really are into maids. And if you like some philosophical input every now and then. And if you are able to laugh about even the flattest, stupidest and foreseeable jokes. Then you might enjoy this show. The story is not worth being called that, the characters are dull and uninteresting and the jokes that weren't all that bad during the first few episodes could barely make me chuckle in the later episodes. However, if you start watching this and feel like dropping it halfway, pull yourself together and hold on until the last episode. It made me cry a little and is the sole reason this Anime wasn't a total catastrophe. 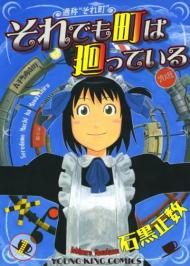 SoreMachi: And Yet the Town Moves