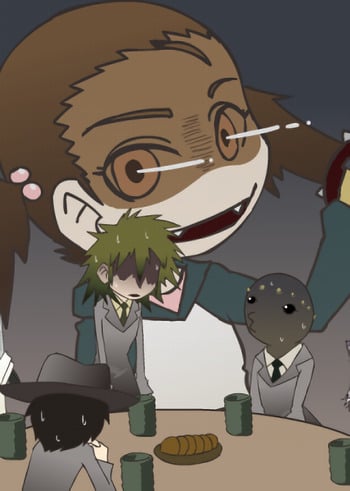 If you're looking for anime similar to Anata no Katagoshi Chotto Ue, you might like these titles.

Set in 1960s Kyushu, the show centers around Santa, a familiar from hell who is charged with maintaining the border between hell and the human world. Santa's mission has him crossing paths with many humans and supernatural creatures.

A man approaches a sinister-looking house, not knowing how he got there or where he is. He has arrived at the Gregory Horror House, a place where strange creatures and mysterious specters float the halls and inhabit the rooms. From the teetering, toothy Judgment Boy who roams the corridors to a sexy and bloodthirsty reptilian nurse, from a gun slinging compadre and beyond, there are plenty of bizarre tenants of Gregory Horror House; but what's really going on, and why do people find their way to this place?