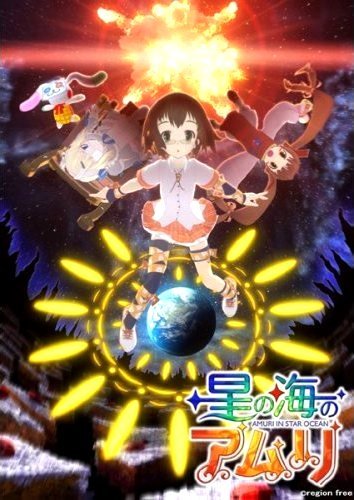 In the far future, there exists a vast region of space that is yet to be explored called the New Space. The levels of new discoveries and dangers are unknown. The Dian sisters, Reina and Rio, made a promise to each other that they will one day journey into New Space together. The two sisters were separated and Reina became a pilot of the commercial luxury cruise liner spaceship Folshion. Rio is a tomboy who seems to have no self consciousness that she is a girl and who finally finds her sister. Rio is allowed to stay on the Folshion granted she finds herself a role on the ship. Sisters united once again, begin dreaming about the adventure into the new territory.

"I am inside a spaceship...outside is deep space. The name of my spaceship-- Spaceship EE." It is 2038 CE. Noshi Hyoda is a 23-year-old office worker facing existential despair. Will she escape her world of apathetic oppression? Where can she go? What shall she do? Perhaps the answers lie in the stars beyond...perhaps not...

How to Colonize Space

For fifty years, mankind has been travelling deep into space, but in order to colonize in the far reaches of the universe, sacrifices had to be made. In the present day, luxurious space liners transport people to pastures new, but a series of gruesome and bizarre murders have been taking place. Just what is causing these killings, and is there any way to stop them?

On January 3rd, 2097, a collision with a celestial object basically destroyed human civilization. Seventy years later, human survivors are still living in space, unable to return to their home planet. Some humans, called "Divers" are able to project an avatar to the earth in order to salvage information from earth-based computer networks.Suzuro is a 14-year-old freelance diver of incredible skill, but only a C-rank due to age restrictions. She works in a salvage ship with her pilot Ginga, who keeps the ship out of flying debris while she's connected to earth, and her assistant Shimugi. It's not only space debris colliding with the ship that could kill Suzuro while diving, there are also dangers waiting on earth that could kill her, just by interacting with her avatar. Suzuro must be certain that the cases she takes are worth the danger!

Who wants to be Princess when you've got the entirety of space to explore? Join Runna and her rag-tag crew as they wander through space in search the unknown, raising hell while encountering everything from the amazing to the surreal.

In the Milky Way galaxy there are many gangs vying for control of the galaxy. Our protagonists Sora Hidaka and Fendy Ecapipo of the Vacca Gang are sent out to investigate a monolith mine that is reported to be run by a "hustler" who is exporting weapons made using the monoliths just outside of Vacca Gang territory in neutral space.

A couple of curious aliens encounter a human space probe sent to investigate an asteroid. It appears to be from the Japanese Hayabusa asteroid probe, which returned samples to Earth during June 2010. The friendly space probe explains how it functions and what its goals are to the aliens.