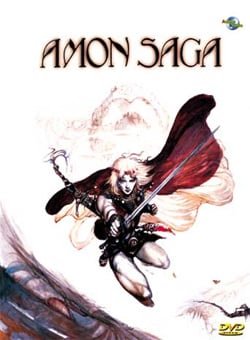 When Amon was a young boy, his mother was viciously murdered by the masked emperor of the moving city Valhiss. Years later, a stronger Amon has returned to exact revenge and successfully manages to infiltrate the city above ground, only to come face to face with the beautiful kidnapped princess Lichia. Against all odds, Amon must now avenge his mother, destroy the evil emperor, and save the lovely princess all at the same time! The days are never dull in the life of a hero...

StoryYou know, if there ever was a classic case of false advertising, it would be Amon Saga. From the first look at the cover of the DVD, I was excited and expected something interesting and unheard of. Now I know it's unheard of for a reason. Amon Saga is a dark sort of fantasy that is overall fairly generic, with lots of plot points and holes that aren't really explained. We only know that there is a giant turtle creature with a city on its back called Varlhiss, and this thing stomps around, killing random villagers and destroying cities. Its rule is a Darth Vader type guy (who reminded me a lot of when Andre the Giant is pretending to be the Great Pirate Roberts in Princess Bride on the bridge), and this Emperor seemed to have killed Amon's mother as a child. Wanting revenge, the now buff and quiet Amon infiltrates Varlhiss by becoming one of the Emperor's lackeys, and thus the story begins. Enter Lichia, the daughter of a powerful man who has a treasure map to the Valley of Gold, a place that old mask-face wants to plunder. Princess and Amon see each other a few times, and bam! Love enters the game. Of course, the crux of the story centers around Amon trying to exact revenge on the Emperor, yadda yadda. The problem, besides the generic aspect, is that there isn't a lot of depth to the events that are going on. The emperor is a gnarly guy with a mask, and we don't ever find out why. We don't understand why he's so power hungry or even why there's a giant walking turtle city in the first place. The princess side plot seems shallow and isn't terribly compelling. Everything about Amon Saga lacks heart, and we aren't drawn to the characters in any way. All in all, this is a lesson: a pretty cover doesn't always mean a great viewing, and Amon Saga definitely falls into the generic dark fantasy crowd. AnimationAmon Saga boasts the character designs and artwork from the creator of Vampire Hunter D, and it shows. Many of the characters appear to be straight out of the old film, lending a pleasing appearance for the characters involved. The monsters and such were fairly grotesque and unusual, and the actual scenery (such as the land ships, Valhiss itself, and sunsets) were well done. That being said, there was some very weird animation to be seen near the end, as random sorcerers battle in what appears to be a bad acid trip. Swirls of pastel colors and dragons float across the screen while the sorcerers flash in and out of the screen, yelling "HURRRRRRRNNNNNNN" type noises. Wow indeed. Detail was decent, though the overall video quality made the visuals look fuzzy and a bit washed out. Colors used were dark and neutral, similar yet again to VHD. Amon himself had dark shades of green, white hair, and a vibrant appearance. The emperor's character design stole the show, looking like a cross between Darth Vader and a bad Halloween costume. Just wait till you see his real appearance under the mask -- you'll laugh out loud. SoundAmon Saga's music was the same as most other series out there: forgettable. I had to go back a second time to remind myself of what tracks were played, and found a mix of synthy (and/or cheesy) tracks that were generic and boring. The other half were orchestral moody pieces which did actually fit well, and reminded me of an RPG. This OVA was made in the 80s, so it makes sense that the majority would be synths, but it still felt terribly unexciting. The psychadelic sounds during the sorcerer fight definitely were hilarious though, and certainly helped that scene with its effectiveness. Voice acting seemed fine. CharactersThe characters were fairly shallow and none were developed at all. We know basically nothing about Amon except that he's pissed off, quiet, strong, and his mother died in the past. We get to see his swordmaster briefly, but only a few sentences are said and that's it. Then there are Amon's goon friends who aren't developed either, and Lichia, the stereotypical princess who falls in love with Amon for no reason at all. Sound exciting? Oh it was, definitely. The sorcerers are my favorite characters by far, but they came out of nowhere and only were around for the psychadelic fight scene. Why were they my favorite? Because that scene was great and the rest of the characters just weren't exciting. OverallOverall, Amon Saga was a very generic and average dark fantasy romp that is forgettable on every level. There are no plot points that will intrigue you (except wondering wtf is up with the masked emperor), boring characters, forgettable music, and admittedly good animation. I can't see this getting any higher than a 6, but I'll mark it down a bit anyways. If you are looking for anything fantasy related, like VHD style artwork or are generally bored and have infinte free time, you might enjoy this. Otherwise, not exciting in my book. 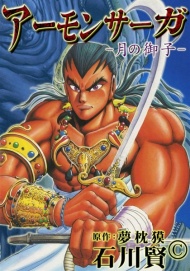