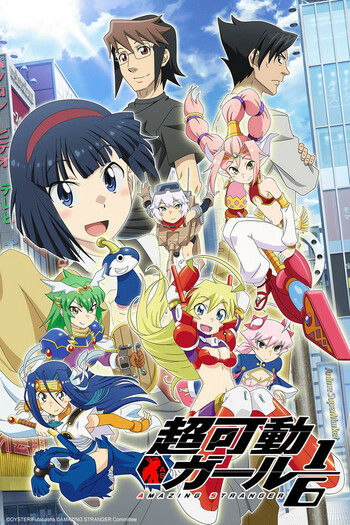 Bouida Haruto is a hardcore otaku who has no interest in 3D (real) girls. One day, he bought a figure of his favorite anime heroine, Nona, but then suddenly, Nona started to move! The frenzied married life between one otaku and one robot (?) is about to start!

You're a Super Mobile Girl

What You Learn Today Can Be Overturned Tomorrow

Keep the Secret a Secret

Love You Till I Die, Love Even Your Lies

Another World! Staying with Figurines at a Hot Spring Inn

Let Me See Your Universe

So... I'm going to break some of my standard rules I try to set for writing reviews, and try to just talk this one out, because this was definitely a unique series. I say that because, even after finishing it, I legitimately cannot tell if it was a horrifically bad series, or if it was such a good parody, I couldn't even fully detect it (next level parody, next dimensional plane of thought deconstruction!) This would be my generalized best attempt at summarizing what, exactly, Amazing Stranger is: It is a comedy, that is not particularly funny, a drama that is not particularly dramatic, a romance that is not particularly romantic, an action-series, that does not quite succeed in being action-packed, a sci-fi series, that does not delve into sci-fi deep enough (like, at all), a look at otaku culture, that does not actually address anything further than shallow stereotypes, and a parody that may or may not be the most amazing or worst parody. So, without further ado, I will now try to -- without derailing the conversation too horribly -- explain why I have given this series such a low score (and then, some small defenses of why I did not give it the 2 out of 10 my gut told me to). Story: 2 out of 10. The story is nearly nonexistent. It somehow manages to wobble forward in some sense of linear building, albeit hobbling like a wounded animal, and yet, it also comes across as episodic, since the point of the show just changes every episode (is this masterful parody? Is this quick and shitty writing?!?) At first, it was a surreal romance between a man and a sentient doll, but then, she is a doll, so she cannot really understand love. Also he's not looking for real love, he's the Loud Otaku Elitist type character. Then, it becomes a harem, but again, not really, because he is never really pursuing any of them in a romantic sense (also, he's married now... which is a thing that does not seem to bother the plot too much.) Later, it becomes... a mystery? Who is making these dolls, and why are they coming to life? (never really addressed... just given some sort of stand-in sci-fi excuse of it being magic ore. Is this still parody?) Then, it becomes an action series, as actual fighting is introduced, kind of? And then the series takes a psychological turn, where we are introduced to this VERY strange sense of lacking purpose by Nona, as she flies towards her death near the end, but then, MC kun arrives through some strange time-universe-size travel means, pretending to be a faceless pretend romantic interest Nona must love because it was written in the anime she came from (Seriously, is this complex or stupid, I cannot tell!?) and then... Jesus, it just goes on like this. In all fairness, being a short-episode series, I have to assume this was just a silly, mediocre anime meant to riff on some elements of parody, although it is only a strange amalgamation of shallow observations, without any real point to the parodying. It went by quick, was interesting enough to continue (only if because I could not make heads or tails as to what kind of show I was watching) so... I mean... It's not a 1 out of 10? Animation: 5 out of 10. The art is perfectly serviceable, in most scenes, but... whenever they show one of the many girls, they are some sort of CGI (I think? I actually cannot tell, but I'm pretty positive. I watched on a phone) but only their faces, I think? I imagine the story behind it is that they wanted to use light CGI to make some uncanny-valley type appearance on the dolls to make them appear less-human, but then again, I just don't think much thought went into this series, so maybe it's just a thing. Sound: 5 out of 10. Nothing out of the ordinary here. Characters: 3 out of 10. There is virtually no growth to any of the characters, but they were at least all... Their typical archetypes? Many characters had small situations addressed that could have provided a more in-depth look at for fun (ShadowNona, for example, feeling excluded could have been something, the Fantasy girl looking to fill the void of finding out her dreams and quests were all entertainment, things of that nature). Most of the dolls kind of just blend together, regardless of how cute they are, and they, without even attempting to make a reason, fall in love with MC kun. I'm not sure if this is a case of translation from manga to short-episode series leaving out information, or if this is divine level parody, where they simply love him because that's what is funny? Overall: 4 out of 10. I would probably rate this much lower, expect for 2 reasons: 1. The art and sound were average. 5 out of 10 seems fair, 50/50, a failing grade but not the bottom. 2. It allowed me some small thoughts, even if fueled by how much I disliked it or was confused by it, and there should be a little bit of bone to toss for that. I really wouldn't recommend this to anyone, unless you're looking for a strangely paced and written, peculiar quick series, filled with cute girls (although, they are action figures so like... GI Joe Fan Fic writers rejoice?) It was not good, although it is quick to finish, so... That seems a fair trade? Man, I am so fucking confused, this review is a nightmare. 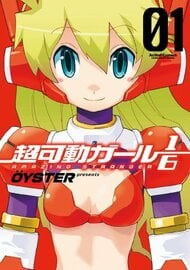 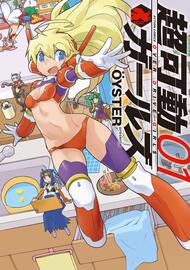