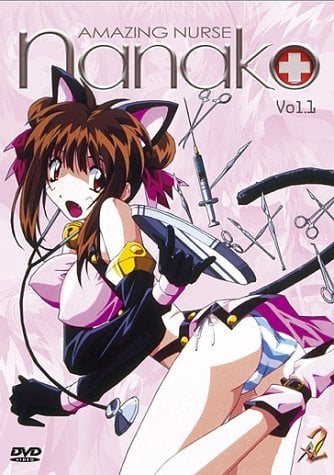 As I was watching this oldie, a very basic question came to me. WHY IS NANAKO CALLED A NURSE??? I mean, sure, the setting is a hospital but Nanako NEVER TREATS A PATIENT. There aren’t even patients there; it’s just some front for experiments on genetics. In fact, the show is better called Amazing Maid Nanako, as she is mostly dressed as such. The rest of the time she is wearing some gymnastics or battle suit… or doesn’t wear anything.

Another thing is how the story itself has absolutely nothing to do with hospitals. It is closer to some scatterbrain ecchi comedy with sci-fi / thriller overtones. Which I guess makes it somewhat interesting. One moment we have this scientific explanation around DNA and the next Nanako is fooling around half-naked.

The story is only 6 episodes and the interest comes only at the fifth, where we learn of the true past of Nanako. But even then, all that don’t seem to matter much as the actual plot of the anime is completely nonessential. It is 90% random gags and slapstick with ecchi, before some spooky scientific dialogue pops up and some alien mutant thing appears to chase Nanako around. And she is no fighter either; she always needs the help of some guy to save her, and she ends up in her undies and on his lap all the time. So although there are scenes of horror and occult, they all go wasted because of the brainless ecchi comedy.

As far as characters go, none is interesting or that developed and practically it is only Nanako and the blondie scientist who get fleshed out when the flashback comes up. That gives them some interest but doesn’t excuse how the rest of the story and the plot are barely trying to offer something good. And no, I don’t consider the ecchi aspect to count as good.

This is a weird short anime. It is not really enjoyable but the weird mix of ecchi with horror and mystery make it somewhat memorable. So is the fact that there was supposed to be a nurse somewhere in here… 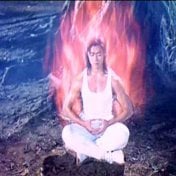 I think I laughed only one time while watching the horrifying monstrosity that is known as Amazing Nurse Nanako. A mans wife is dying, from a car crash or illness or some other nonsense I can't remember nor do I really choose to (don't worry why she's near deaths door, it doesn't really effect the joke). The mad scientist character (inventor of Nanako.) Helps to rebuild and revive her from her impending death by putting in cybernetic augmentations. He does rebuild her, as a matter of fact, into a entire overtly robotic, blocky body with a single human head laying on top. As would be obvious, the husband is furious and starts yelling "what the hell did you do!?"

The Mad Scientist replies "what are you talking about? She's like a go-bot now!"

The wife Replies, horror struck "but I don't wanna be a go-bot!"

that's it. it made me laugh that one time. There, that was the one sole good thing from this absolute mind-numbingly awful awful awful show. I can't even put into words how bad this show is. I mean, imagine the absolute nadir of whatever you like, just think about whatever you like and think of the complete opposite of it. Now imagine that flesh-eating cockroaches (the German ones or the big as hell ones, take your pick.) is eating it alive. Then Wasps the size of your fist start flying out of it's mouth and start wishing more then anything to leave you as nothing but a giant sack of fleshy welts.  Also it killed your father. Then it raped your mother. Then put your little brother into slavery, ate your dog, told you Santa Claus isn't real, and erased your high-score on tetris. That's roughly about the same as watching Amazing nurse Nanako.

Over-exaggerating? a little bit probably but in all honesty that's what watching this piece of pig/bear/duck excrement is. This thing has almost no redeeming qualities whatsoever and these 6 episodes Probably destroyed more of my brain cells then 10 years of binge-drinking 24/7 could do. It's like looking into the Abyss (if the Abyss had Double D's.) or finding out there is no god. It's just a distressing series that you wish to wipe away from your mind.

The story follows Nanako, an android built by Dr. Ogami, as she is trained to become the ultimate weapon wanted by both the army and the church. Nanako is in love with Dr. Ogami, Dr. Ogami doesn't care and............... ya know, screw it. You don't care, I don't care, no one cares about the stupid stupid plot! The setup never goes anywhere and the entire show is nothing more then a thinly veiled excuse to show jiggling breasts.

Each of the six episodes are seven different degrees of stupid where nothing pays off, none of the jokes are funny, none of the characters are anything remotely human, the only decent thing are the two things attached to Nanako's chest, and even they aren't all that interesting!!

honestly, look at them (for god's sake there no way you can't.)! pointing outwards in midair with no support, cone-like with the nipples constantly visible. they don't even seem remotely real or normal, not even anime normal!! the sole reason for the whole freaking show, the only reason they made it, and they couldn't even get that right.

I think another thing that's distressing is this: this show has had more views then Getter Robo. Getter Robo, one of the founding super robot animes, one of the most influential animes made in the seventies, has been watched by less people then Amazing Nurse Nanako. I'm not just talking about a few more views then it, I'm talking about 7 times more views then it! What the hell? Seriously, what the hell? How could this thing get 2 people watching it!? This show couldn't even beat Don't leave me alone daisy in quality, hell not even Agentosama in quality, yet this beat out Getter Robo in views!?!? How is that even humanly possible!?!?

*Sigh* I wonder sometimes when western civilization will fall. I don't know when, I don't know where, but I think I might know how: it'll have something to do with chicks naked making out and frankly, that is going to be the perfect distraction looking at how we're going.

Whew boy is this long! well, either way that's all I'm saying. I know it's opinions and everyone has opinions, but I'm smart, smarter then you, so I'm right :-D

0/10 does not have a catgirl like on the cover art.