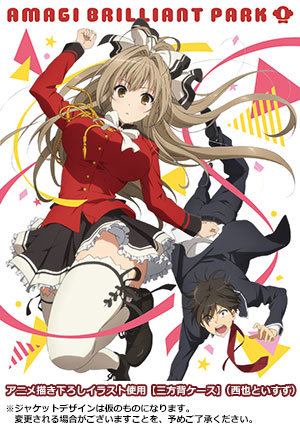 Skip the theater and head to the main event theme park instead.

These mini-episodes are supposed to offer a look behind the scenes of the Amagi Brilliant Park work place, and they connect to stories from the series itself. One episode follows the mascots as they make a commercial similar to the one made with all the females of the show, another has Kanie searching for the “AV” videos one of his potential hires starred in, and one has the Elementario girls trying to have a nice dinner after their ordeal, but then end up fighting instead.

Even though these are suppose to add to the episodes, they really just were over the top clips that try to be funny, but never hit the mark.

The animation style is much cruder than the original, but cute for these little clips. There's also possibly a nod to the great Excel Saga, every time Lord Moffle gets angry in these.

These episodes weren’t dubbed into English, so I only have the Japanese version to go on. If these were the same voices as the show I would have been disappointed. As I said in my original review, I was actually surprised how much I enjoyed the voices used for the mascot characters, but in the Japanese version it seemed as if they didn’t even attempt to make them sound different than any other character in anime, they just sounded like your average school kid.

There was also only basic background music, which was more of an annoyance than an enhancer.

There’s nothing really added to any of the characters here, it’s just them goofing around while trying to appeal to those who probably thought the jokes within the show didn’t skew enough towards those with Macaron and Tiramie’s sense of perverted humor.

This felt like a big reversal for me, often I like the little bonus clips made for the show, and as a series I really enjoyed Amagi Brilliant Park, but I couldn’t get into these as they just weren’t funny and almost felt like a chore to watch.