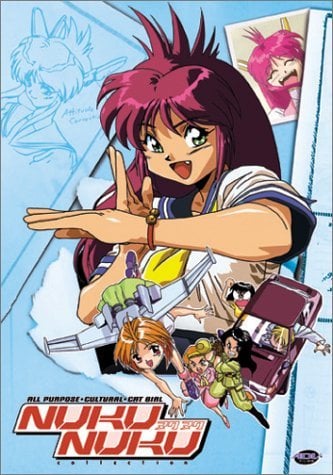 This is such a cheerful and silly action comedy! Happy 90s synth music, cheesy and simple story and scenes, and quite entertaining and easy to watch. The opening song of the first half of the show is especially well made.

The villains – a snooty company president, two militant office ladies and a killer android – are a bunch of screwups, and I find them hilarious. Nuku Nuku herself is a fairly standard ditzy yet unbeatable protagonist. The other characters are quite muted and passive.

Cat Girl Nuku Nuku's main theme is that of fighting over child custody. I think the show periodically manages to capture some of the poignant feelings in real separation and child custody cases, while keeping the delivery entertaining and funny. I admire how the show is able to portray a relatively low-escalation conflict where nobody really wants to kill anyone (except for the robots), and the opposing sides can be reasonably friendly yet impotently childish with each other, all the while utilizing very extreme measures like prototype military vehicles, deadly weapons and crazy plans. It's a comedy gold mine.

My biggest disappointment with the show is that it doesn't bother to give itself a proper conclusion, instead wasting most of its short length (including the last episode) on mindless episodic content with very little exploration and development of the characters and their relationships.