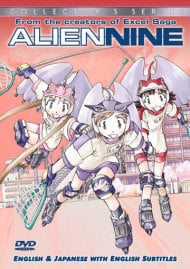 Judging solely from the picture here on anidb, one would think that this would be a standard magical girl OVA with no real innovation or complexity. However, without a doubt, this is one of the strangest animes I've ever seen. In Alien Nine, incredibly cute, shoujo characters are juxtaposed against startling violence. The plot begins in standard fruitcake mode (girls must roll around on rollerskates to catch aliens), but deviates from this formula very quickly. I, for one, have no idea what happened in this anime. The plot becomes pretty much indecipherable at the end, and the ending credits have an event that is especially incoherant. However, whatever the hell happened over the 4 episodes, I enjoyed it. The anime's mix of cutesy girls and flat out disturbing gore provided a surprisingly entertaining mix. Whether the events were actually disturbing or merely unintentionally hilarious, I never got bored during the course of the anime. As far as animation and sound go, I was fairly satisfied with both. As mentioned before, very cutesy character designs are placed in direct contrast to the remarkably disturbing gore and violence. This juxtoposition works surprisingly well on a basic visual level. As for the music, what at first sounds like standard happy BGM slowly becomes more and more sinister as you realize the true intent of the anime. Though I'd never listen to the ost by itself, with the anime it works fairly well. What prevents the anime from being REALLY good, however, are the characters. The best of the characters manage to be merely unmemorable and uninteresting. The main character, however, is ridiculously annoying. Call me crazy, but a school girl who cries about 3 times an episode can hardly be called "likeable." I expect that if the three main girls had been redesigned and expanded upon, I might have cared about them a little more. Ah well. At any rate, the anime certainly isn't as bad as the average score seems to suggest. I think the reason for the abnormally low score lies in the fact that this anime is reaching the wrong target audience. People looking for strange, disturbing animes probably look at the cute picture on AniDB and shy away from watching it. Likewise, people looking for fruity shoujo crap download this and are sorely disappointed. The bottom line is: if you're looking for disturbing, gorey, and downright WEIRD anime, you can do a lot worse than Alien Nine. However, if you're looking for a cute, mindless romp across some sort of magical fairy land, you'd be better off watching horse porn.

The story line seems really odd, not really explaining much. It starts out counting votes and doesn’t tell us what though the girl that seems to be called most often doesn’t want to be. It turns out that she is going to be part of an alien fighting squad. Now something bothers me about this… why are they having elementary school children dealing with aliens and not adults? Not to mention, a girl who seems to be the weakest link is our main character. The whole time I watched it, I was thinking, Our main character everybody, the crybaby in the back row. She’s a very big spaze who seems to just freak out about every little thing. The characters are all over the place. Yuri is pretty useless, Kumi is pretty much the always the leader, and Kasumi is the little miss perfect. Frankly, they just seem like a very miss matched grouping. And they all have to wear aliens on their head’s called Borgs…. Why am I getting a thought of the Star Trek version of Borg in my head now? Oh ya, because they are pretty much assimilated into the damn alien fighter thing. Oh ya, can someone tell me what the Borg is doing with their tongues whenever their licking the girls backs? There is a lot of filler in this show it seems, and a lot of it feels like nothing really happens except one or two little things like seeing the personalities that are actually rather shallow. Really, do we need three episodes dedicated to seeing the girl’s personalities when they are so shallow a 5 minute episode would work fine? This is only 4 episodes long, give us something more! The Animation is alright, though all the characters have a rather round face with no chins or noses when looking at a side profile. The animation sometimes loops a bit. The space ships look a lot like mushrooms instead of actual space ships. Can I ask why everything looks like screws when they show tentacles. The artwork seems a bit like the first Digimon Adventures Movie. It’s just pretty run down. The Music is alright, though it’s not the best. It could use a little more in order to stand out instead of the odd little things. The Voices are somewhat alright, though some of them seem to squeak. This is the English version that I’m talking about. The girls just feel like they are saying there lines half assed, actually, all the characters are. They just don’t seem to be able to do very good voices. When Yuri keeps saying Kumi Kumi all the time, it really sounds like she is saying ‘kill me’. It’s a bit funny in that aspect.

The recent Madoka Magika (a hyped-to-the-moon series) is nothing but the latest title in a rather old trope. The mother of all evils is Alien Nine; probably the oldest non-hentai, non-comedy anime which bases all its appeal on torturing little children. Sounds sadistic but it works. The problem with this anime as well as most others that use the trope is that it ends up being 99% shock effect and nothing else to remember it about. I mean, seriously, would you even care to remember it if it wasn’t for that twisted thing that happened to the poor aliens and the way the girls reacted to it? Ok, one would say that for once it was scary for little kids to experience such a thing and most viewers are not accustomed to expect gore and terror in a show about little girls. That makes it memorable, but hardly quality material. So what is the story again? It’s about three elementary girls who wear aliens as hats and who are commissioned from their teachers to protect their city from aliens. Oddly enough, their equipment is quite casual as it is just fishing nets and roller skates. Watching them going to battle makes you think they are off to chase butterflies in some park. And truly, for most of the show you think it is nothing but a silly story around kids. And here is where the shock factor comes in to kick you in the nuts. The aliens are not so silly and their teachers are not so honest and the girls are not blockheads enough not to be scared with all that.The problem is, the anime does not cover the whole story and thus you need to read the last volume in the manga version. That is what simply ruins the good mark in the story section, although to be honest it is not exactly an awesome scenario to begin with. The basic plot twist is as old as Neon Genesis, albeit with elementary girls instead of teenagers. The directing is also not given to charismatic hands; it is basically a collaboration of some nobody who only directs hentai and Irie Yasuhiro, the one who also directed FMA Brotherhood. Although the second one sounds promising, his roster is not that great and his teamwork with the other hentai dude shows badly in this anime.The characters go unnoticed as they usually do because of the shock effect which completely overshadows them. They are just not important before the events they experience, which again ruins the mark in the character section. Other than that, you can imagine them as a far meeker, far more crybaby, and far more messed up in the head version of the Powerpuff Girls cast. Sounds like they deserve a good pat on the back just for that but as I said the incomplete story ruins their developments and possible catharsis, plus it’s the dreadful revelation that gets all the glory and not the girls who passively react to that. The production values are the usual treatment studio J.C. Staff does to most of its works; poor overall with lots of lolis to fool the ignorant. The art is minimalistic and personally I say it’s ugly, as the characters look way too cartoony and the production values are not high enough to make up for that with fluent enough animation or frenetic action. The music themes are nothing to remember but do manage to make you think it really is a silly show, and take you by surprise later on. So, is it a good show? Because of being left incomplete, I say it loses a lot of novelty. Plus, as usual the shock factor seems to overshadow the characters, which counts as a no-no to me. Plus, Madoka Magika looks better… SUGGESTION LISTElfen Lied NarutaruBokuranoBattle Royale 2Mahou Shoujo Madoka Magika 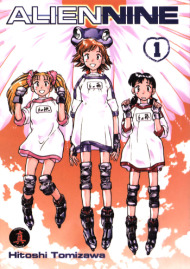 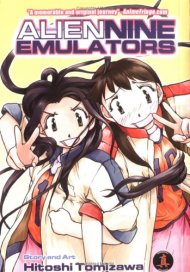