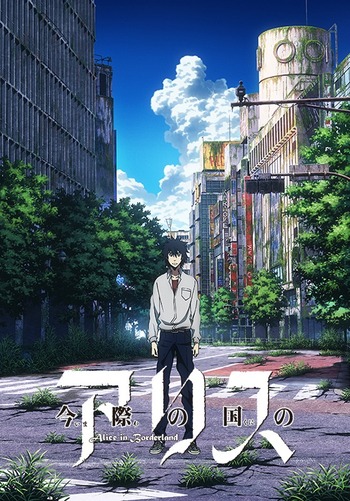 And a bloody good start it is, because I love the shit out of the manga. The everloving crap out of it. So they would have had to make this all CGI, unfaithful and make it look like absolute fucking shit for me to hate it. Fortunately, there is no shitty ass CGI (That I remember), it's faithful, and it looks good. And looks faithful to it, complete with horse head mask, which would have looked great in a suit but packs quite a punch.

Straight up, boners for survival games. That is my sub-genre of anime/manga: death games. This has killer hide and seek, more killer hide-and-seek, a killer... kinda like a riddle game, but also a really douchey riddle game. You can think of it as one game per episode and covers a good part of the manga in those three episodes. Has some good suspense and it's pretty interesting in how the games go about themselves and how they react to it. The card numbers offered per game is a highlight, as it determines what challenge it'll be, from physical, mental, something and my favorite, Hearts. Or psychological, which is another thing I enjoy: Psychological death games. Those are great.

What you don't get, is backstory on the Borderlands itself. That, or any explanation for anything apart from what veterans of the Borderlands know and what they tell the MCs. You're left in the dark about the whole ordeal and the best you'll usually get is about what's currently going on, as in the current game.

And one thing I absolutely loved was the intermission cut to the anime title. I loved that shit.

Overall, it's a good three episode OVA, although you can just read the manga and have the same experience but in triple quick time. For an adaptation, it's just darn spiffy and fans of the manga would enjoy it.

DAMC Presents: A Damn Bloody Good Start to the Marathon

This is my first review and english is my second language so please just ignore my  mistakes.

This three episode ova is about a bunch of guys who sucks in the real world being warped in another world where they are force to participate in a survival games. These games are exiting and actually make sense.

Story is pretty fast paced. You would find cliff hanger at the centre of each episode which will make your heart go crazy. Despite it being unique in many ways there are still plenty of story lines so one might find it to be a rip off.

The art is pretty good . It does not have that dark and scary feeling. It emphasizes on light and harmony in colours, bringing forth brilliant details.

Nothing special except preview music I liked it very much.

The characters are likeable. You can see the layers they are hiding. They make some progress and discover thier hidden abilities, but it does not take long as expected from three episode long anime.

The ejoyment is lot more than what you expect from a three episode long ova. As a matter of fact it is absolutely perfect and will  leave you wanting more.

I have to say, I don't know but does it really only have 3 episodes or are there more? But overall, I thinks its amazing! =D

Well that was pretty great.

the anime was dark and the end was depressing, wish it was longer tbh

Not a fan of this show. Probably just because it was too short to do much with its premise. I like survival game type shows, but for me personally one of the most important things about those shows is making likeable, relatable characters that you want to see live/will be sad if they fail. There just wasn't enough time to learn much at all about the characters or their relationships, so for me a lot of the tension that could have been in the show just wasn't there and the emotional moments lost a lot of the impact they could have had.

Sound and animation are both fine, and I like the premise, the characters just really drug it down for me. If this show was 12 episodes I think it could have been a lot better and more emotional.