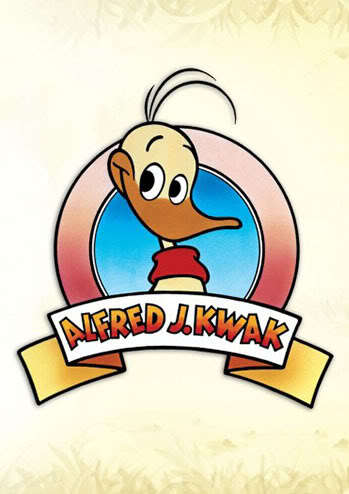 PREFACE
Judging by the picture in the front page, this series appears to be a typical fairy tale with cute animals and cheery stories. Well… IT ISN’T! It’s a grim story, dressed in bright colors and light humor.

PRODUCTION VALUES
The animals are drawn with simple figures but are adorable to look at. Animation had no serious problems with this kind of low-numbered-joint characters. Cloths and buildings have a European feeling to them and are essentially a mix of several stereotypical features found worldwide. That means that you must get some optical references to Fascism, Apartheid and European monarchy.

SCRIPT
The protagonist is a naive duckling. While playing happily, it goes away and escapes its mother’s attention. This saved its life, as a rich animal inside a luxurious car RUNS OVER ITS ENTIRE FAMILY! The rich bastard simply says, “I’m too rich to care” and keeps driving WITHOUT EVEN SLOWING DOWN!
Later, the duckling is looking for its family, but it doesn’t find them (thank God). It is found and taken cared by other animals and things start to get better. But the entire universe is simply out to get our tragic hero. A kleptomaniac friend of its, steals a jewel and “accidentally” drops it on the duckling’s head.
“Look! The duckling that dumped its family is the thief! What a bad animal you are. Shame on you!”
“But I…”
“Shut up! The universe says you are never to be proven right!”
And something similar like this keeps happening to the duckling over and over throughout the rest of the story…

I can’t feel but think that the guy who thought of this scenario is SICK! What kind of children could possibly like this kind of shit? I tell you, I had nightmares with the poor duckling calling for its dismembered family.
And this entire “everyone is out to make your life miserable” attitude is something I don’t want even my worst enemy to experience. It is supposed to be ironic and humorous but it only feels petty and cruel. You could see it as a variant of Oliver Touist but it will still feel overdone.

Yet, this is the same reason the series is unlike anything else I have seen in a series for kids. If you keep watching, you will actually see a story where there are dozens of references to Fascism, Apartheid and European monarchy. Really, it isn’t a typical children’s story with simple good guys and bad guys in some magical fairyland. It is in fact portraying the modern times of our world in a very sad way. I don’t say I like it but it is ironic and it is original in its presentation. So, ok, everything is resolved rather childishly. Still, it actually has deaths and malicious acting on the parts of the bad guys that are eons more sinister that the average stupid villains that never kill in typical cartoons.

CAST
All characters have quirks that set them apart. Besides the main hero and his nemesis, none of them has a strong presence or decent character development.

The duckling’s tragic story makes it interesting for a while, but all its naivety and Deus Ex Machina blaming gets to your nerves pretty soon. Still, it does mature a lot as a character. I mean, we clearly watch him grow older, get a girlfriend and take part in an uprising against Fascism, Apartheid and other forms of malicious acts. Quite a lot for kiddies to grasp, right?

Then there is the villain in the story, who pretty much is half a dozen infamous historical figures in one body. Really, from Hitler, to Napoleon, to Godfather, to greedy faceless oil company suits, he is there in all and causes more harm and death that Cobra Commander and General Havoc ever did with their endless terrorist armies in old cartoons. And in far more sinister ways too! He looks like a silly crow and yet he is evil incarnate. Plus, he has a backdrop story that excuses his behavior. He was not “born evil”.

And then they say it is a children’s story. Yeah, right! With these two, most anime have less depth in their respective protagonists. Still, it is true that after a while they do act in silly ways and the end-result is generally a happy ending to a sad story. And the rest of the cast is not as great as these two.

LEGACY
If Bambi’s dead mother is the limit in cruelness, this series goes off the charts. It is original; no doubt in being memorable. Still, not only it is mentally scaring to children (I was only 10 when I watched it) but also all this injustice and cruelness are hard to want to face again in a children’s story. Cute little animals don’t deserve such treatment. Well… maybe in some sick hentai fetish they do. But not in a children’s story. I guess it is a show that appeals to grown-ups more than it does to children. But even so, who old enough will be willing to watch THIS old cartoon and not some corny dubbed Brazilian soap opera? Not many.

The series does have its share of funny and heart-warming moments, but you can find much better of those elsewhere. As for the social – political overtones, as rare as they are in anime they do look simplistic by the end of the day and ruin any real creadability. So I consider them a half-good attempt at being interesting and captivating.

SUGGESTION LIST
Candy Candy Not with animals, but with a really dramatic story around the life of an orphan girl.
Princess Tutu. The best mahou shojo, concerning a duckling.
Duck Tales Not dramatic and not even an anime. It’s a Walt Disney cartoon with dozens of great adventures, involving Uncle Scrooge, Donald and his nephews.