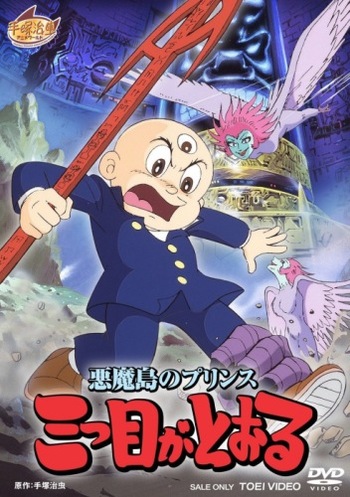 If you're looking for manga similar to Akuma Tou no Prince: Mitsume ga Tooru, you might like these titles.

When Lord Dahn-Guh "accidentally" unleashes powerful demons unto the land, he orders the fool Ondal to recapture them! Unable to fulfill the task on his own, Ondal is accompanied by Hae-Moh-Soo--a legendary, foul-mouthed warrior who helped to trap the demons in the first place--and...David Copperfield?! Along the way, they come across quite the interesting array of characters: a gang of armed nuns, the mysterious Samson with singing powers, the twins Pai and Pei, and so many more!

In the story, bookstore employee Kousuke is one of many Japanese people who believes he has no ability to speak English. He buys a book titled "Devil's English" and accidentally summons a demon. Kousuke is confused because the devil can only speak English, but the devil says to him, "You can speak English already! You just need to throw away four things."

Akatsuki: a powerful demon of illness, which infects victims, turning their eyes red, and slowly kills them. Usually, they take the form of a strong monster connected to the victim's body. The only way to cure the victims infected with Akatsuki is to slash the victim's body with special anti-Akatsuki weapons, known as "Crave." The people who possess and use these weapons are called "Kiri-Isha" (Slash Doctors). Hibiki, the protagonist of this story, is a Kiri-isha. He is partnered with Kirisa, another Kiri-Isha. Their mission is to cure people infected with Akatsuki.

After defeating Joka, the last formidable enemy, Taikobo had brought peace to the world. However, there's something making Taikobo worried...?

Junior high school student Amane lost her parents early and lives with her uncle Yuki-chan. Even though he had a faint feeling for Yuki-chan, she lived calmly for the same days, but one day, when she cut her hand with a book in the study, she summoned a devil from another world. Will call out. Amane has signed a contract with the devil for Yuki-chan, but that's why she ended up being a "migration consultant from a different world for the devils suffering from population growth"...?

Every few centuries, 496 demons of the demon world each choose a human who will fight each other in a tournament of sorts called "Diabloli". Our main protagonist is a little high school girl who was chosen by the demon she dubbed "Gi-chan". She was given the power of fire and allowed one wish. She wished to go to school.

Youko Tama and her younger step brother, Jinka Sendou, are two demon siblings traveling through sengoku-era Japan to keep the peace and battle evil. Joined by Hyoudou Shinsuke, a cowardly swordsman, the people they meet, places they see, and creatures they battle will be legendary!

In life, Majeh was a gifted swordsman. In death he acts as a reaper for the King of Hell, collecting souls of the dead to bring them to the netherworld. All this changes when a rift opens up between Hell and Earth and evil spirits begin escaping to the mortal realm.

There was once an ogre mother who gave birth to a human-looking child. Instead of an ogre's horn, this child was born with a sword in hand called the "Onigirimaru" or Ogre Slayer. He has no name and is only refered to by the name of his sword. Though he appears human, he is pure ogre. Believing that he will become human once all of his kind vanished from the world of humans, he sets out on his destiny to slay all of his kind. Even now, in the mother world of Japan, he is still out there slaying ogres.

Sumiremaru and his 2 companions travel the land assisting in the passage of a soul. But what happens to a soul that has gone too far?