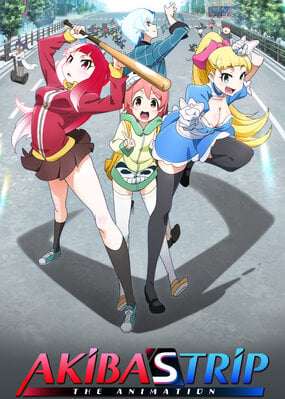 Based off the hit game comes a new series about the danger lurking in the Otaku heaven of Akihabara. Vampires with an ability to take over anyone they bite seek their prey  in this anime fan’s paradise. When Tamotsu Denkigai encounters one, he nearly loses his life until the mysterious Matome Mayonaka revives him! Now part vampire, he forms a group to protect the streets of Akiba. fighting to keep the streets safe.

This qualifies as one of the weirdest anime ever (not necessarily in a bad way). There are strong influences of otaku culture (example: Maid & Butler themed episode) as the location is in Akihabara, many parodies (example: Yu-Gi-Oh parody for a large portion of one episode), and also influenced by other nerd and gamer culture (example: Street Fighter episode). Some of the tags are somewhat inaccurate. While are some comedy bits, I would not really qualify it too much as one, as there were only a few funny bits. The Vampire tag is also not really accurate, as the characters don't show any signs of this actually or even give so much as a hint of it, they are just super-powered people with a silly weakness (covered further down). For some reason, I found the formula to copy Power Rangers to a strong extent, as each episode introduces a new menace trying to take over the citizens and city with a unique method. To save the day, the main characters come along to fight and save the day and exterminate the special minion, who are under the control of a leader that gave them these powers. Ecchi is a semi-strong theme. How are enemies defeated? By stripping them down to their underwear, this is the only weakness. The same goes for the main characters, they are under a special form where they are super-powered, but if they lose all their clothing, they are permanently dead. These aren't vampiric qualities, hence it is an inaccurate description. There is a background story running throughout, but it isn't a heavy one. Much like the Power Rangers, it comes in the form of keeping the city safe from these evil minions and ultimately to eliminate the leader behind them. The anime is episode based for the most part, the last 3 however, are more serious and focused on that story component. Other than that, the rest you have to see for yourself to fully understand it. It really is one of the most strange and silly anime I have seen which actually made it interesting, but also prevents it from being epic. The art style is probably the hardest to get behind for many, it is as weird as the anime itself. The biggest note is that the basic art style conflicts with the ecchi and makes seeing the characters in underwear far less exciting than some might think. You do have some cool coloring that have a really retro feel, like the hair which is a key component to signify who has these special powers. Then there are clearly parts that are real-life pasted images, such as menus or even the shelves of a store. Then there is normal animation, and also what looks really out of place, such as Arisa's character, it somehow looks overly simple. It is a really wacky combination for a 2017 anime, but it is directly based on a game that was designed that way on purpose. Music is actually good though, most ending themes have a different song with the artist, and singers displayed as the credits start. There are also some concert bits, as would be expected from otaku culture. Overall, I liked this for how weird it was, it was something different. That weirdness though prevented it from being something I loved though. It got my interest, and was a decent watch, but just not on the same level of love as many other anime I have watched.

I really think that this anime will resonate only with those who spent significant time in Akiba :) I've been there for 3 month, exploring it everyday, bit by bit. They even included Kebab place, which as far as I remember was the only one I've seen at all. The one which is near Yodobashi Camera Store. And that turkish guy, they even dispayed him in one of the episodes, I've been talking with him many times every time I've bough kebab in there :) I was launghing my ass off after watching that episode. I don' think there's a story at all in here, it's about everything and nothing, more like slice of life. I do believe main aim was just to show all common places in akiba, also as to show common otaku topics like gaming cards, pc nerds, harm radio, food nerds and etc.

Great. I like myself a good Ecchi anime. I find it pretty cool and interesting how the anime is set in a modern, colourful society. I also like how the plot has superhuman powers but I feel like the technology used is a bit too unrealistic for the setting. The art is stunningly amazing and the video/animation quality is great, as well as having eye popping colours (and characters, which I'll explain later).I really like how the show starts and has fast paced and peppy songs. I'm kind of into that, but it would be a little better if they had subtitles for the songs. The character designs are pretty cool, with interesting personalities and colourful hair, as well as a couple of cool and...busty people *Cough, Arisa cough*. The fight scenes are awesome and some are just downright spectacular, with some casual moments to break the ice. Overall, this was a pretty great anime. Too bad it only has 1 season. Hoping for another season! 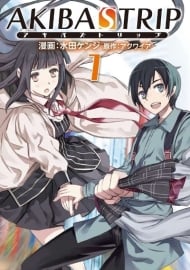 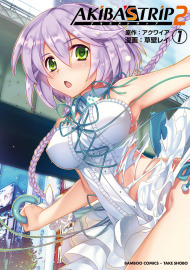