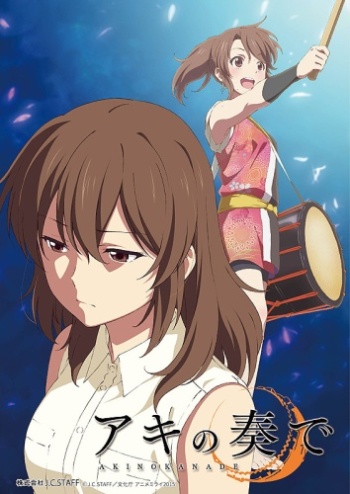 At first I didn't look forward to watching it since I thought it'd be bad. I had never been so wrong.

I enjoyed this anime from the beggining to the end, its story is well-written and more than a few of us will feel related with the problems of the main character. I'm really impressed that in less of 22 minutes explained such a great story as depth as this one.

About the music: I might accept this is one of the main reasons for which I liked this short anime, it was really good the sound of the drums. But also it's important that I mention that overall the music was good.

Finally, I'd like to say that I hope that Japanese government keep this proyect of Anime Mirai. Even when we might not get stories like "Death Billiards" all the time, we find good and entertaining stories like this one.

PD: I'm sorry if i have some mistakes with my writing, English is not my native lenguage.

Warning this Review May Contain Spoiler

More anime Mirai, who doens't love these cute shorts and this probably is one of my favourites (even though I haven't watched too many of them). So drumming, I found this an interesting topic to follow with quite fun characters and for anyone who is looking for a short then this would be a great one to watch.

So we follow the story Aki Miyagawa who wants to become a professional taiko drummer in Tokyo however it doesn't work out as she planned. It is a basic story which would be perfect as a short anime however it did seem a bit rushed at certain points therefore I would say the story was holding this back. I also would of liked a bit more about certain characters in the story, but it was enjoyable.

ANIMATION
These Anime Mirai shows generally have good animation and this was no exception, it was amazing and there were hardly any clear mistakes. So overall the animation was great but not perfect...honestly I haven't got too much to say about it.

Drums, drums and drums...I just love the sound of drums and the sound in this short was amazing. If you are interested in music based anime I assure you that this won't disappoint, as well as the voice acting being realllllllly good. Again nothing really to complain about.

Now here we might have a problem, the characters that were introduced I liked but there wasn't enough of them. We had Aki our main who we saw thoughout we got to know a lot about her such as her life and who she associated with but as this is only a short then it is understandable that they only focused on one character but they did introduced so many other ones that kind of just got left behind. So to improve this I would say make it longer or into an actual series so we get to know they minor and secondary characters slightly more.

Overall love this short but needs to work on characters and how many they want to develop.

PS: This was part of the Daily Anime Marathon in March 2016

Aki no Kanade is a movie which was released back in 2015 for the Anime Mirai Tamago project, and also is one of those cases where you can’t judge a book by its cover.

The execution could have been better though. It’s true you can’t do much more with 22 minutes but it tries to shove much in too little time and, while important bits are handled nicely, the time-skips can get a bit jarring.

The animation was on par with the standard of these movies. Everything looked nice and vivid and the movement of the characters as well as the drumming was handled properly.

If there’s something an anime about music should never fail that’s the music/sound. As you may imagine, Aki no Kanade has a very good soundtrack and the drumming is a feast to the ears. The voice acting is good albeit a bit forgettable.

The aforementioned time constraints also hindered the development of the characters. While Aki was properly developed the rest of the cast ends up not getting enough screen time to get fleshed out properly.

All in all this show is no masterpiece, but it’s definitely an entertaining watch despite its flaws.

This review was written for DAMC Anime Marathon #5

You Cannot base this movie, off of a regular anime movie or series. For only 22 minutes of content, it was mindblowing.

In the whole movie they managed to show her life, her dreams, and her commitment all in such a short amount of time, which most animes struggle to do it in 12!

There was two romances that were shoved back, one with a guy who only showed up once (Brown haired guy who said he did all the training), and the one nearly bald kid.

I'm really hoping for a second! I hope you all check out this movie, it isn't long and it's worth the time : )