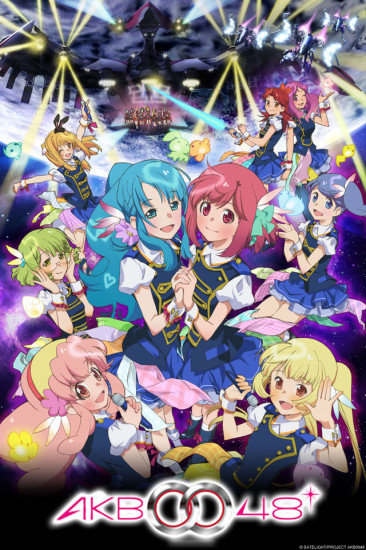 So remember all those good things I said about the original series? Well just forget about most of that.

So after announcing the rankings from the new public voting the show turns into a constant showing of one-upmanship. Every chance one of the trainees or successors get they breakout into a huge showing where they declare they'll be the next Center Nova. It got pretty comical midway as even the most useless of characters like Nagisa (yeah I know she's basically the main character but lets face it, if this was reality she would have been kicked out of the trainee program on day one) jump up and say they'll be the next big thing.

After a good portion of the series, revolving around the girls training and stabbing each other in the back, finishes, we turn to phase two, the hackneyed story about a stereotypical evil company ruining the world and being meanies by killing poor innocent animals. That second half was painfully preachy and poorly written, if only because it's the route most shows take when they want to go out in a flame of idiocy.

In the end everything gets buttoned up in a way that you could see coming from episode one, and boy was it terrible.

The writers also left out the answers to pretty much everything and chalked up most things to the random Center Nova phenomena that seemed pieced together by a bunch of children, children who despise people watching the show.

Nothing has changed here for the most part. The idols got a few new snazzy outfits, but overall it's exactly the same as the first series, which is to see it's very good, just nothing spectacular.

While, like the animation, things stayed pretty much the same, I felt there needed to be a slight boost due to the new songs we kept hearing. Some of the new songs AKB sings have great backing music with an eighties rock feel to it, and the overture to the season had a very cool similarity to Pink Floyd's Pigs. But other than those two bits, all the same.

Things went sharply down hill when it came to the second season's characters. Since now all the idols were striving to be the center nova we lost a lot of what made the girls what they were. Personality was exchanged for greed, and growth traded for cheesy dialog.

The minor, and in my opinion overall better characters, took a backseat even deeper on the bus to Chieri and Nagisa. We still got a little bit of cheerfulness from Sonata (as well as nicely inserted Zero Wing easter egg quote), intelligence and caring from Suzuko and hilarious self doubt from Makoto, but for the most part it was overshadowed by Nagisa's amazing dullness and Chieri's giant ego.

Even the Successors became much more unlikable, with Yuko and Minami spending most of the series yammering on about the center nova and both showing a somewhat greedy personality that conflicts with the message of the original series.

Oh and what ever happened to Mayu Watanabe? They started to hint at her being an android of some sort, but then completely abandoned her.

In the first season I thought AKB0048 had something great and original, but in season two they betrayed that. It became poorly written and all turned into exactly what it originally wasn't. Gone were the stories about the girls and their relationships and in came terribly built up scenes solely meant to end with some character claiming she'd strive to be the greatest, once might have been fine, but I think half the episodes ended with this garbage fluff.

Instead of a great series about strong characters we got a series about attention hogs and the ever present "Evil Corporation." It's a sad turn for a show that started out so promising.

Do yourself a favor, watch season one and then just assume all the girls go on to create a great band and live happily ever after.

I didn’t care for this anime. I was intrigued by the story at first, but it moved away from all my favorite aspects of rebellion and saving the world. If you like idol anime, then you may enjoy this one.

This anime moved my heart. It showed the passion and hope for the love of the world. The story is about girls that are trying to become center novae and they work hard to be able to achieve their dreams.