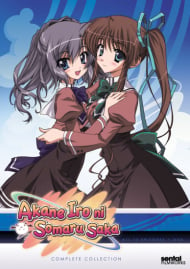 If there is one thing worse than harems, that is harems based on porn games. Of course, the fans of such … hm … games … will refuse the term porn games and go for something more linguistically intelligent, such as eroge, date sim or My-Dreamworld-which-is-better-than-real-life. Anyways, whatever you wanna call them, it is basically about games where you press the right options and if they are right the girls drop on four and do their thing to you. There are of course non-erotic games as well which focus solely on romance but Akane-iro IS NOT ONE OF THEM. You get to screw every 2D girl in it; I checked the HCGs as, hm, material for this review. Then again the anime is based on the PS2 version, which is sex free and has different girls to interact with, but the original concept is still the habba-habba!So here is the thing. Let’s say someone for any reason would want to make an anime adaptation of such a game. He sure wouldn’t do it faithfully to the storyline. Not only because it is not profitable since nobody would buy the game if it is the exact same thing. Also because you can’t make a linear story about a game with over 6 different paths. There is also the omnibus gimmick (which is dreadful) but Akane-iro IS NOT ONE OF THEM. So when it comes to adaptations, there are only two choices available. To make a few hentai OVAs with the first part of the game, or a harem series. Making many hentai OVAs or few harem episodes is NOT profitable. So Akane-iro went for the half season harem option.The first major difference you will notice when turning a porn game to anime is that the protagonist swifts from a “hump anything female you encounter” dude, to a “please don’t touch me or I will faint” dude. Yes, he turned into that pathetic, lame, disgraceful male specimen, called an indecisive lead. Pure horror. The rest of the girls retain most of their features from the game, which is not a hard thing to do since they are harem girls. One hairstyle, one vague character trait and one excuse to get all horny with the fail lead is all these creatures need. The story is again just an excuse; watching the first two and the last two episodes is more than enough to get all the plot… all five lines of it. But even that makes absolutely no sense as this is a story where the lead is forced to be married to a girl that he saw for the first time in his life, getting cockteased by his own sister, and being constantly surrounded by five more blunt chicks who don’t seem to have any interest to other men but him. Plus there are scenes with military invasions and battles with huge robots and monsters which last around 30 seconds each and I swear to God I have no idea how the frakk they are all relevant to this excuse, called the story. Yet having 4 out of 12 episodes with a somewhat plot means there is actually 1/3rd of the duration with something going on, worthy of paying attention, right? WRONG! The whole set up is completely retarded and makes no efforts to appeal to our suspension of disbelief. Out of nowhere the lead is cockteased by a dozen women who have no problem cosplaying in their own school or rushing to wash his back in the bathroom or kiss him passionately … on his penis. Did I mention his sister is the no.2 most possible sex partner? The ending is another expected thing to notice and nerdraeg about. You see, there is this term called shipping, where some fans prefer one girl over another to end up with the lead. Having the lead choosing a girl will disappoint some of them, so the producers went again for that dreadful ending where the lead simply remains indecisive and keeps getting cockteased by all the main girls. Also, the last episode loses all logic and coherence by trying to pass as a mindfuck or a social drama around things THAT HAVE NO SERIOUSNESS! As for all the rest of the episodes… well, guess what, the beach episode, the spa episode, the school activity episode. Things all harems copy since the dawn of time and are nothing but excuses for the girls to expose themselves and keep reminding us that they are nothing other than fapping material. Akane-iro is a fine example of how dreadful adaptations are and how lame harems are next to the source material. It has nothing to bother in it; the humour is weak, the characters are blunt archetypes, the story is completely retarded and fillerish, and the music score completely boring and uninspiring. The only good thing it occasionally has is the animation and the voice acting… when they are not all soft porn. The character figures are rather well drawn and the voice acting is nice. Too bad the backgrounds are weaksauce and the BGM forgettable tunes. And too bad the camera keeps making huge zoom ins to the girls’ faces or legs to distract the viewer from noticing how average anything else looks and sounds.So there you go; another unimaginative and boring anime, made just to sell to the fans of the game or to bust the balls of the rest of us with the inability of the lead to simply go for it, and bait us to play the game just to see that (well, it did made me browse the HCGs). It is another fine example of how exploiting and retarded the genre is and how innovation was killed by them just for a few quick bucks. BURN THE WITCH!

Truth to be told, I had high hopes for this anime, but it left me rather disappointed. The score I gave was generous, perhaps too generous, but that's how I am. The plot is a typical school life with several wierd settings. The male lead is engaged to a girl and all seemed to be going fine until the final episode, which I found extremely unsatisfying. Maybe that is the reason my disappointment with this anime enlarged. It was promising and the plot started to build up into something interesting, then *poof, everything was ruined in the end and it seemed like the anime reverted back to its beginning, starting this never-ending, dull drama again. The animation is nothing worth noting, but it was pretty decent. There weren't any tunes that caught my ears either, so the music didn't gather much support from me. The characters were beautifully designed, which was why I had high hopes for this anime. Every character had personality and didn't feel like an empty husk of meat, but alas, the plot did not fufill the purpose of its colorful characters.  Although the game itself is of decent quality, the anime does not do it justice. My hope is that they remake the anime, but usually my dreams end up in dust. People who just want something to waste their time on, be my guest and watch this huge disappointment. It will please you for most of the time, but don't expect there to be a satisfying ending. 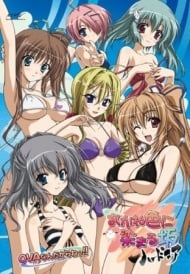 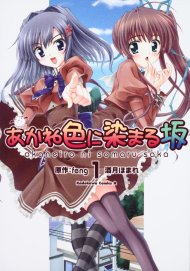