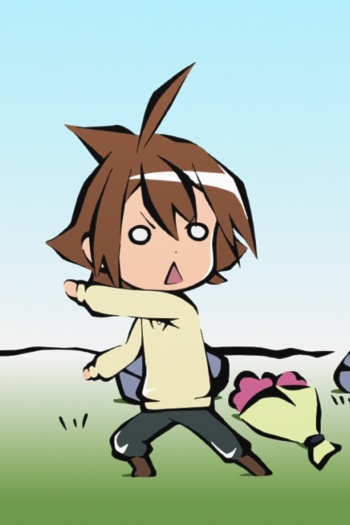 Akame ga Kill Theater is the picture drama series for Akame ga Kill. In case you aren't familiar with picture dramas (PDs), they are humorous little side stories and comic vignettes set in the world of, and populated by characters from, a main series from which the picture drama derives. They usually feature the main characters in a chibified or super-deformed form, and present them acting in an exaggerated manner from their usual personality. They are generally shorts, not full length episodes, with lots of still-frames and limited fluidity animation. Lots of times, these picture dramas present stories that have nothing whatsoever to do with the main source anime storyline and they are stand-alone comedy/variety skits featuring the main characters from the main anime.

Akame ga Kill Theater is true to form. The animation is a bit more advanced than is sometimes seen in these types of anime, but still features the cute SD character designs and amusing assortment of skits and situations typical of the genre. However, it incorporate the events of the source anime so as a warning: do not watch an episode of AGK Theater until you've first seen the corresponding episode in the main anime, or you will encounter spoilers.

Besides being a bit more advanced in animation than most PDs, AGK Theater also has a bit more character development than most. The penultimate episode, for example, takes the events of the main anime and presents a heartwarming and touching epilogue to the main series episode.

This is not an independent series that can stand on its own without the source anime, but it is a worthwhile and complimentary addition to round out your Akame ga Kill experience.

As DVD extras have become worse and worse, the team tasked with taking care of them for Akame Ga Kill really put together something worth watching.

These are cute little DVD add ons, where each one minute clip has a slight connection to its corresponding numbered full length episode. They touch on goofy little things like Sheele always losing her glasses, Incursio becoming an action figure sold on TV by Lubbock, and Akame and her sister trying to resolve their differences on a radio talk show.

The crude and cutesy style of animation used for these fits the tone the creators were going for perfectly. Despite the drawings being much less detailed than that of a full series, they are still very well made.

These use the same V.O. artists as the original series, with goofy music behind all the clips. I was surprised to find they did voice overs in English, as generally these bonus clips are left in their native Japanese.

These aren’t really created to build any characters, but instead give them a lighter side, such as having Najenda being extremely afraid of bugs, or watching Seryu teach children on what to do when dealing with bad guys.

Very little in these moves the series along, but they add to the fun nature of the show and are a nice little laugh for anyone who wants more out of the series.

Out of all the DVD extras of this nature that I’ve viewed, I’d say these are the most thought out, well made, and entertaining of the lot.