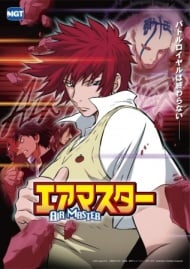 PREFACE Jump! Kick! Dodge! Swing! Pantsu shot! Roll ! Spin ! Boobies shot!Although it appears to be another typical Shounen series with brainless action and Ecchi scenes, Air Master is in fact a Seinen series, and a parody of the usual Shounen fighting and Ecchi anime. THE STAFF Created by Toei Animation, one of the largest and most famous anime studios when it comes to children’s shows. Directed by Nishio Daisuke, who also directed the fabled Dragonball Z series and lately is preoccupied with the Pretty Cure franchise. It was a wise and fitting match-up, since his attension to action and emotional tension fits the overall feeling of Air Master. All those though were still not enough to deem the show good because its context is minimal and its plot too simplistic to stand the test of time. SCRIPT I want to become the best in the world! (she jumps and her boobies bounce) Maki is a famous female street fighter and other street fighters who want to make a name by defeating her constantly challenge her. She has no trouble accepting, as she loves fighting. When she is not fighting, she is taking part in comical situations with other high schoolers… That’s pretty much the story. Maki has some secrets about her past that reason her lust for battle but they are not much of a plot twist or a dramatic backdrop. The ending was not at all satisfactory. It is a simplistic tale, told with little effort. It is more about making a joke out of the genre than anything more. PRODUCTION VALUES - As far as fan service goes, you can easily be fooled to think it’s an Ecchi series because it always talks about breasts and such. But if you watch the characters and what they do you will not be able to find 1 female character capable of providing fan service. The protagonist and the other blond grappling girl are way to masculine to be beautiful, the little girl is way too much annoying to be considered Moe and the "big breasted girl’s" hooties are so huge that become ugly. Sexual references are more of a comic relief rather than arousing. There is also some yaoi for the female and the… not so male audience. - The parody part plays out fine; most faces are intentionally drawn too round and ugly, as the series is trying to promote only well-built bodies and crazy-looking bad-asses.- Action scenes are great to look at. Unlike most series, which focus on a specific martial art or supernatural motif, Air Master is based on Street Fighting, where everyone has his personal and unique blend of fighting. Fists, kicks, aerial attacks, grapples, swipes, everything seemed (and felt) better than the real thing. - And not to forget to mention that the arena is not a typical empty square but parks, alleys and buildings. Their features become part of the battle and aid or stomp fighters, depending on the circumstances. Although the outcome is usually predictable, you really forget about the obvious and get absorbed in the action. Not many series are capable of doing that.- Lightning/ Visual Effects are not too many and not too fake. Speed lines and spotlights in the most part; they are nice but not great.- Music themes and voice acting were completely mediocre… except for that little girl’s voice whose name I forget. She was annoying but did make things not so typical. Otherwise, it is plain average. CAST Don’t be fooled by the supposed drama, romance or seriousness the characters sometimes show. There is nothing to be taken seriously about them, as they are either beating or making fun of each other. They have some interest for not being gender-specific; as girls aren’t acting all shy and frail and boys aren’t that manly (part of the joke, I presume). They all have different quirks that make them even more unique. But, generally they are nothing you can’t find in similar series.Maki, the leading female fighter, is funny just by being tall and naive. She fails to provide a serious side to her as she basically just cares to fight strong people (as if she is Son Goku with breasts) as a way to forget how empty her life really is. Everything else she is supposed to learn and mature during the series is bull; I only cared to see her fight and expose her underwear. Thus the cast makes an impact but it’s terrible at leaving lasting impressions. She looks great only from the feet and below.Her friends in the school were uninteresting as hell, as they had no real personality or character development. Funny to look at but forgettable as soon as the series ended.The bad guys… were not really bad guys. Fighters that just wanted to challenge Maki in a fight and didn’t plan to destroy the world don’t count as villains. But most were just beaten in an episode and then written out of the story. The last one (and of course, the strongest) gave some twist to this formula but he appeared too late to make any major impact. LEGACY Not really rewatchable, as the thrill only works once. There is not much of a story or perplex characters that can spur you to give it a second try. The humor or sexiness is not that great as well. At best, you will just scroll through the fighting scenes. It is rather good thanks to its Street Fighting theme. You won’t find many fighting anime were the protagonist fights only for his enjoyment (besides DBZ) or where an annoying little girl keeps screaming for even less reasons than usual. That is what makes it better than average but still not enough for a full menu of satisfaction. There is very little to look forward to outside of some jokes and battles. SUGGESTION LIST World’s Strongest Desciple Kenichi is also a comedy around martial arts. Grappler Baki is also about street fighting and is very brutal about it.

Air Master is the perfect combination of Ecchi, Lesbianism, and Battle anime that I have ever seen. As far as a story goes we never really get in to why the Air Master fights.  I mean we get bits and pieces but no here is why and this is the point to all of this. I am not a big battle anime watcher. I get tired of the two fighters coming out with a massive move and just when you think they are down, Whammo the person send a bigger attack to his opponent... Well any way the story was strong enough to keep me interested and I saw this on crunchyroll and it did seem to have a little age behind it but still a good watch if you can handle the repetitive-esqe type battles.

Personally one of my favorite animes I loved the action and the designs of the characters and majority of the comedy, I reccomend watching it