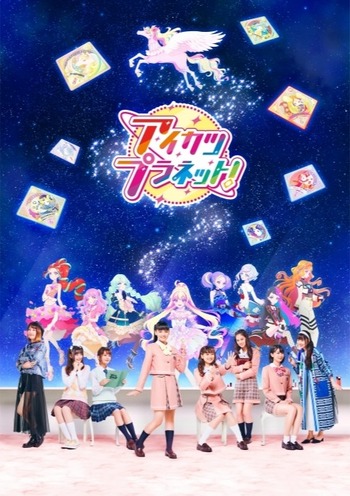 Aikatsu Planet is part of a new genre of anime. The Space Jam of anime, if you will. A mix of both animation and live action scenes used side by side to tell one story. Since this is a bit of a weird situation, I think it would be more useful to divide up my review in different sections than usual. Before I begin, I just wanted to point out this is a stand-alone show that is not related to any other in the franchise, so it can be watched independently. Non-spoiler review!

As a quick overview, in this world there are idols who do their idol activities ("Aikatsu") via an avatar in Aikatsu Planet. (It seems to be some sort of digital world, though the entire thing is very vague.Could be magic??) Girls can step through a door activated by their phones into the anime world of idols where they can eat, preform concerts, do interviews, and more. Their avatars are usually bright and girly (very anime-style) and can protect their real life identity.

The story begins with a highschool student named Mao being chosen as the new owner of the very popular avatar called Hana. Hana's original owner skipped town, so their idol agency needs someone to secretly fill in so the public wouldn't find out the #1 idol was gone. So most of the story is her learning about how to be an idol, making friends with other girls, and dealing with small parts of show biz.

Story is fairly simple and by itself doesn't really do anything new in the genre. In fact, from a 'show biz' point of view, it takes even more of a step back from realism than the previous shows. In this series, all it takes is heart and occasional morning jogs to gain the skills of a top idol. We don't see any competion beyond the main characters, so there is not much in the way of obsticles. At least in previous seasons there were more characters and a much larger variety in competitons, events, and classes that gave more background to how idols fit into their universe. In Aikatsu Planet its a bit unclear how 'popular' idols actually are, how many exist, and how its possible to suddenly become top tier without any experience. Especially when the main character is so dumb and unaware of everything going on around her (possibly due to being a kids' show and needing the characters to explain simple concepts).

If you've never watched a Japanese live action show, this will be weird. Japan does TV shows in a certain way that feels 'off' or 'fake'. Their actors aren't going for realism, they're going for exaggeration. Everyone is quirky and happy and don't talk like a normal person. Imagine if people in CSI talked like characters from a kid's tv show and you'd get the same kind of vibe. I think the life action portion could be a huge turn-off for some people who don't want to deal with that portion of the show (and they can't be watched separately). I only watched a bit of Japanese live action TV/movies before, so it felt weird for a long time, but eventually the style wasn't distracting.

The live action bits looked visually okay, like the settings, props, costumes, etc. They had an okay budget. However, my least favorite part of the live action scenes were the actors. Even though some of the actors were actual teens, trying to act like "kawaii anime girls" didn't translate well (again, downside of Japanese style TV). I feel like they would have been better off using middle school age girls, as mid-teens feels old to be acting in the super cutsey way they were. Sayaka Akimoto, who played one of the few adults in the show (and was a member of the famous idol group AKB48 in real life), was easily able to steal every scene she was in because her character's age allowed her to act less "fake", in addition to her acting experience. 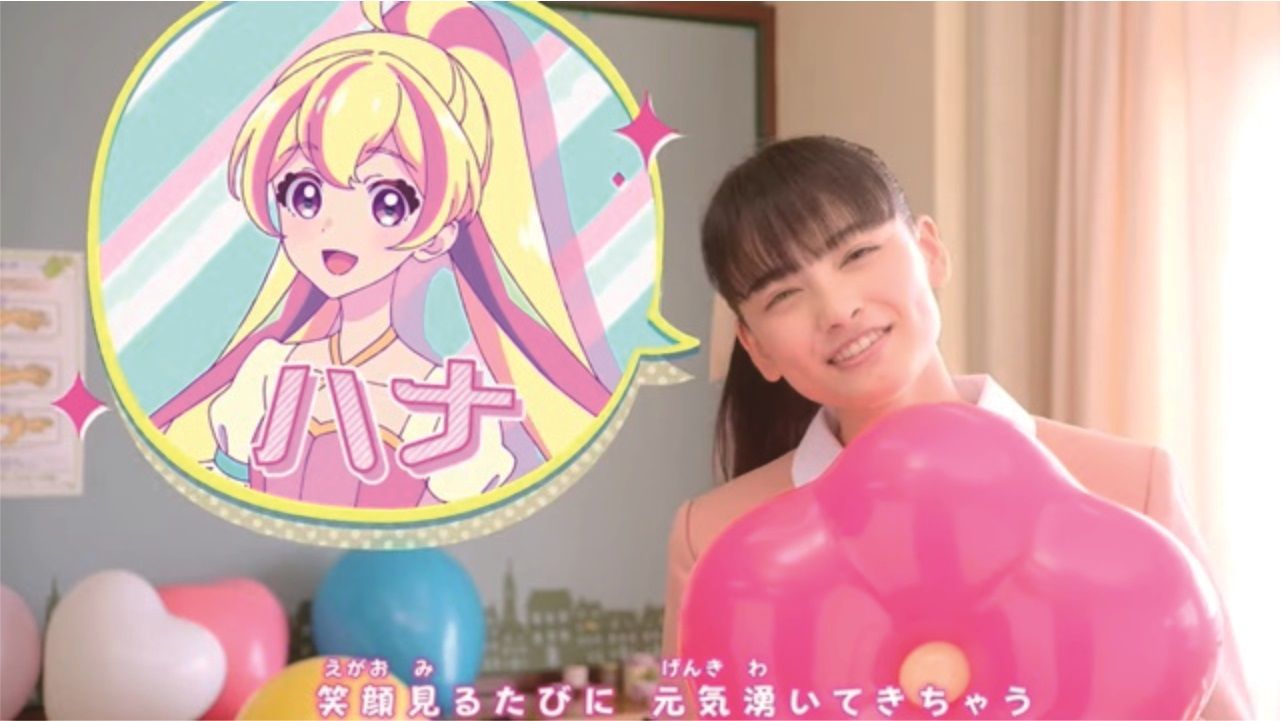 How does Anime and Live Action work together?

In this series, most scenes take place with live action. The main settings are the highschool the girls attend, and their idol agency's large office. Then, when they need to be idols, they step through a portal into a digital(?) world. Honestly, I like the idea, and it is kind of fun. What kid wouldn't want to step into an anime world? It overall "works", even if there isn't much of a 'flow' between the two versions. My only major complaint in what I spoke about in the last section. The jump between live action and anime doesn't work great. It doesn't seem like they're the same characters at all, even though they voice their anime avatars. The ages just don't match up visually, plus the difference in ways anime characters and actors are supposed to talk, causing a break in the flow of the story/show. But hey, its a kid's show, so I do have a limit of what I expect in the quality. 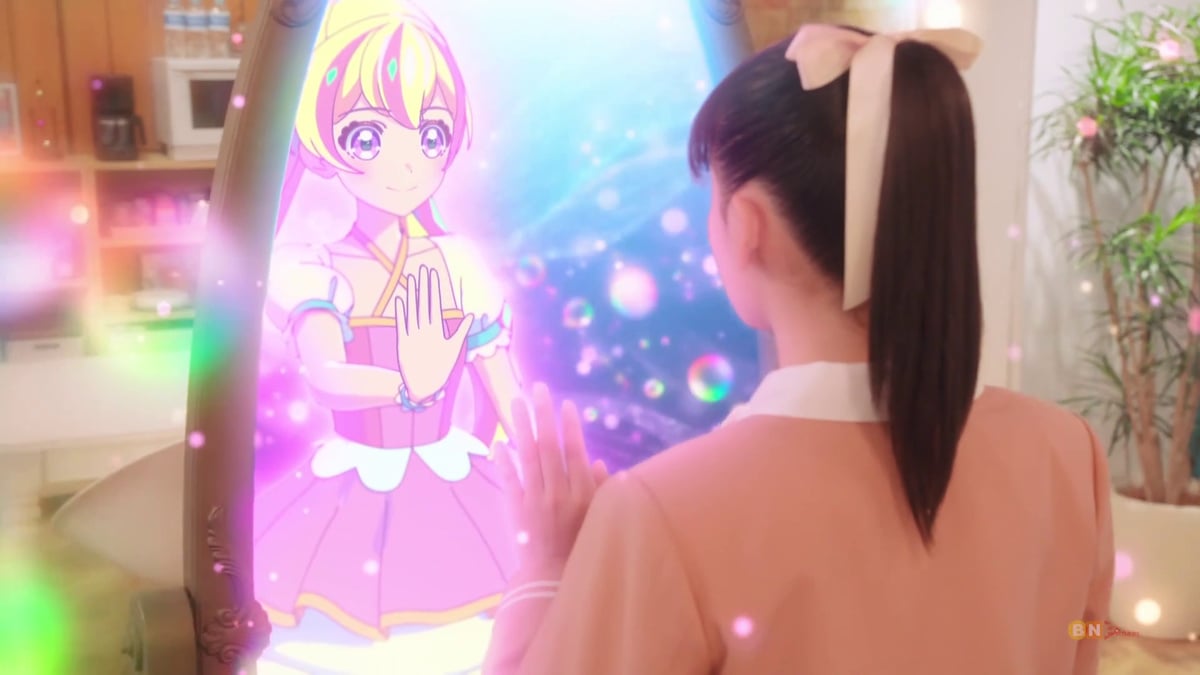 How does it compare to other Aikatsu shows?

The overall tone is much different than other Aikatsu series. Of course, a lot of that is due to the live action scenes, but the setting is also different. In the rest of the franchise, the series took place at idol schools, where in this one, they attend a normal school and did idol stuff on the side (and for a chunk of the series, in secret). The previous seasons also suffered the problem of being very repetative, with each new series of new girls tackling the same problems the last batch did. This one did break that cycle, as some of the obstacles faced were different than normal. However, I don't think it was for the better, as it went further away from believeable levels of showbusiness.

I do also want to point out how similar this is to the PriPara franchise. If you didn't tell me the name of the show, I would have bet money this was PriPara and not Aikatsu. They literally stole the formula of girls teleporting to digital world to do idol shows via avatars. I won't bore you with all the comparisons, but there are a lot.

Is it great? No, not at all. However, its simple and fun, and probably a great kid's show. It's also nice to have a small break from the regular Aikatsu formula, even if its "stolen" form another franchise. And it was fun to try the live-action/anime mix, even if it didn't work well in my American-tv wired brain. I hope it doesn't become a standard, but I don't regret trying it. And of course, the music was catchy as always. There were also plenty of annoying bits, like the super Mary Sue main character (basically automatically becomes the best idol with minimal work), and many characters acting like dense kids and not teenagers.
I would only recommend it to people who enjoy these types of shows, otherwise it will be a huge pile of cringe. And skip the last two episodes, which are just filler. 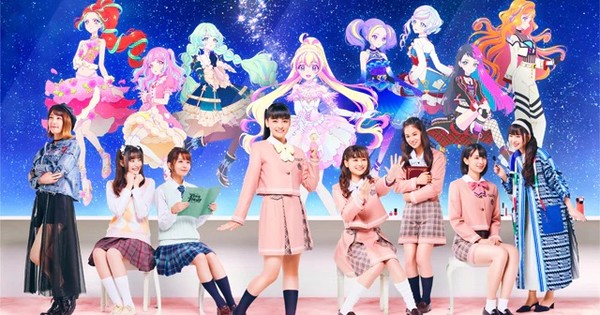 You know how most people dread live-action in animes? I was a part of that audience for almost half of the show but thankfully the acting got better.

While I haven't watched PriPara(I saw many people saying the plots are almost the same) I liked the idea of the anime and enjoyed it quite a bit. It's quite perfect as a live-action and marketing for the actual cards. I do have to say that Ruli gets annoying very quickly, I would've given the characters a 10/10 but omg Ruli!