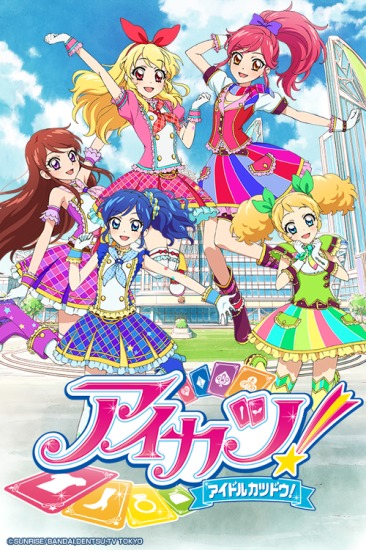 Both of these are overly bright and "pink" shows aimed at young girls. I'm pretty sure if you enjoyed one, you'd enjoy the other.

Like Aikatsu, but think it's a bit too childish? Try Love Live, a series about a group of girls trying to become popular school Idols. The show itself is more complex, characcters are less annoying, and the animation is better.

Both of these anime obviously targent the same audience: young girls. Everything about these shows are simple, colorful, and girly. They also both involve singing and dancing, and share a "magical girl" feel (even though technically Aikatsu isn't "magical"). If you enjoyed one, I'd recommend you try the other as well.

Enjoyed the idol aspect of Aikatsu, but looking for something a bit more serious (and not designed for 5-year-olds)? Try [email protected], a show about a group of idols trying to make it big in Japan. Like Aikatsu, it tries to show that the idol world requires hard work; but it manages it with less horribly designed outifts, better characters, and better animation. This sequel is a bit better rec for [email protected] than the first season because now the idols are more famous and there is competitions with other idols.

Second season of Aikatsu Stars! The new story will feature a rival school to Yotsuboshi Gakuen named Venus Ark. The school is on-board a cruise ship, and the story's two new characters are students at the school.

Aine Yuuki is good at making friends, and is enrolled in Star Harmony Academy's general education track. She befriends Mio Minato, the school's top idol, and becomes an idol herself.