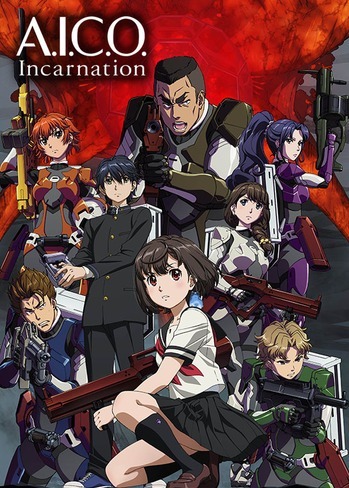 Overall A.IC.O Incarnation wasn't terrible by any stretch of the imagination.  I would recommend this to someone who has a Netflix account and also suffers from a medical condition called boredom. And only if you're kinda desperate for something to watch.

I never once thought that this was low quality or poorly animated... but watching well drawn malignant tumors attacking people gets kinda boring.

I thought the story was very strong and well plotted out (for the most part).  If you pay attention, you can call just about every plot twist incarnation has to throw at ya.   There's definitely a sense of satisfaction in figuring it out before they spell em out.  Either way,  I didn't think it was terrible.

The sound got a low score due to the obnoxious reuse of sound effects.  Just repetitive "bang bang bang" in any given action scene.  There wasn't enough effort given to varying it... very tedious and dull.  Followed by the same few slimy sound effects.  I could tell we were in for a treat when the first action scene kicked in.  Just really basic 80's techno...  news flash, the 80's doesn't want you taking their epically meh theme music.

The only HUGE problem with this anime is the characters.  They're really boring with hardly any personality but at least they're consistent and believable.  Most chars don't get a backstory and what they say on screen generally doesn't add anything.  There's just a ton of secondary chars that get A LOT of screen time that I feel next to nothing for.

I can relate to Andy Dufresne after watching this anime.  The middle was how Andy broke out.  The final three episodes is Andy actually being free.

If you got a Netflix account with some time to kill, it's worth a watch.    I'm happy they left it at 12 episodes.

Remember all those low-effort writing unoriginal swarms of Sci-fi movies from 2010 on that were in theaters every other day like Live Die Repeat and the like? This is that but a bones anime, yet somehow with even duller characters. That isn't to say it's bad, but it isn't going to surprise you with its story or anything like that. The only way it might surprise you is that it's a netflix original anime, and it actually doesn't suck. I'll come out and say that it's not for people that don't already like sci-fi. It drags its story out a bit and can get repeditive.

The charaters are the worst part so I'll talk about them first. The main two are Aiko and Kanzaki, the former is an unassuming girl with mysterious dreams and the latter is a mysterious generic anime dude with mysterious motives who wants to protect Protagonist A from the evil sci-fi stuff and politicians. The two barely have any defining personality, which sucks because they're the main characters. I know to a certain extent that an anime is only as good as its MC but since there's no effort put into Aiko herself, I'm basically going to chalk her characterization up to the story instead.

The story is what makes the most out of the mediocre cast. They meet a group of ragtag mercenaries that are tasked with helping them get through a dangerous zone, full of an unimaginitive but well-designed an animated monsterous substance called "The Matter" triggerd by "the Burst" and they have to get to its epicenter to try and stop it from spreading, and to find Aiko's mom and brother. The biggest problem here is it's not inherently interesting, this is the kind of thing we've definitely seen before in sci-fi. But is it well-done? Well, since the characters are so boring it isn't all that well-done at all. The only thing it makes cool is the action.

The only not dishwater parts of the cast are that team of mercs they meet, each with a different trope they fill. They're a bit more entertaining but still aren't enough to get the character score up. A few have some insert-anywhere backstories, but they don't come into play often.

The concept of power suits with roller skates shooting down monster fluid with powers is cool to me, not gonna lie. Since all the goo looks the same, it can get a little bit repeditive but it looks goddamn cool.

That leads me to the animation, which of course is top notch... sorta. Bones is using some CGI this time around, and while not too intrusive or out of place, it's used a bit too often. Luckily the goo itself isn't CGI and always looks creepy and cool, so it isn't too much of a problem. The character movements don't add a lot to their characterization, which is a bummer, but they're good enough and the action is portrayed well.

I also like the designs for all their weapons as a side-note. They remind me of Destiny.

Half of the story also happens in the politics of the show. There are quite a few characters to fill worldbuilding gaps there, but it all gets overshadowed by the action in the "field". The villain of the show is all set up through these interactions. It's... ok, but the excitement for me comes from Aiko's journey.

Story-wise, it relies a lot on its later plot twists, but there's a bit of a problem if you care about predictability. There's so much foreshadowing that they basically give you the plot twists early and cover it with one that's nearly inconsequential. It's a clever enough story tactic but it could have been done better. The sound fits the atmosphere but it isn't special enough that I'd listen to it out of the show.

All in all it's the most worth-it netflix original anime I've seen, even if it's not saying much, and it's enjoyable if you're sci-fi anime fan.

AICO was a nice departure from the typical. It starts of slow and stays slow. Slow enough you have a chance to predict the outcome just before it is being revealed to the chars themselves. I do not like anime with such complex plots that feels like you are being dragged along for the ride. In AICO, you are right there along with them.

I felt nothing for the chars. I'm just suprised more of them did not die. The divers themselves unnaturally care free about their life or death situation. We see dudes die in on scene and the other chars are like "pftt... sucks to be you".

The overall story esclated rather quickly. Ep1 : Hi I'm the care free main char. Ep2: We are in a life or death sutiation and I am not sure I can trust these guys. The later episodes makes you want to watch more right until the end (which was ruined). At lest they did not leave any cliff hangers for a Season 2. I would not have watched a season two of this.

In case it was not clear, I enjoyed the series. I does not even crack my top 20 list, but I liked the journey.

I binged this whole show in one night, I absolutly loved this. The opening is fantastic, it has so many hidden meanings you don't realize. I llistent to it daily, and every time the vocals and precussion amazes me to tears. The show could use some work, obviously, but it has such a great depth of awesomness. And at times it is very hard to understand, but if you trudge though, you eventually will. But this Show was so freaking good, i can't even describe how i felt after watching it. I cried at least fourteen times while watching it. There is such a major plot twist, even i, who can see plot twists a mile away, even i didnt see this comming. So overall, i would totaly recormend.

It's not the worst anime, but not the best. It could be worth your time if you have a netflix account and have watched every other anime on netflix, otherwise don't bother. Storyline is fine, but is slow and could get boring fast.