Ai no Kusabi: The Space Between - Reviews 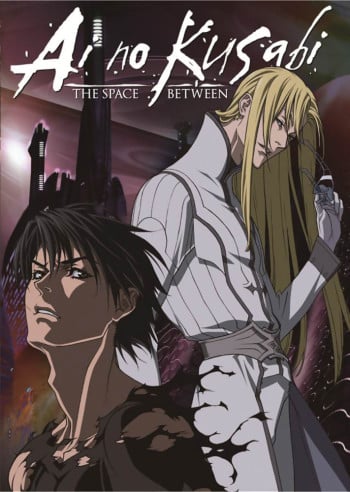 There are two versionsof Ai no Kusbai. This version is the second one and consists of four episodes. The first one consists of two OVAs. Both have very different endings.

I really liked the anime style of the 2012 version. Another big detail between the two is that the first is much more visual in regards to the adult content.

A futuristic world overseen by some colorful AI, then you've got the androids called Blondies at the top tier who have pets and use them in many ways. Remember that this is yaoi. And very well done too.

Under the Blondies are characters of different classes and hair colors. Our main guy, Riki, has black hair and his eyes hold so much emotion! He is from the human slums and considered a 'mongrel'.

This anime is great for yaoi sexy times! The story is slightly lacking but overall I enjoyed it.

In a technical sense, the style of animation, character designs, and background settings were pretty decent. The story set-up seemed like it could be interesting since there were clearly a lot of societal politics that a viewer does not understand at first. However, I had no clue what was going on with the plot and as time went on, I realized that I wasn't supposed to be paying attention to that part and instead focusing on the hot anime guys. First off, the main relationship was the most toxic and abusive thing I've seen in a long time. I typically seek out LGBTQ media and this one was recommended to me as a good BL, but it suffers from the strange fetishization that's present in so much BL content where the viewer is assumed to be brainless and perfectly content with seeing half naked men huffing and moaning as much as possible even when it's not for any good reason. The bizarre sex scenes were genuinely awful and I didn't like the way they were initiated even once, so I couldn't find a single reason to recommend this to someone else. I liked some of the worldbuilding and character designs, but 4 episodes isn't nearly enough to explain the politics and origin of this society that would've made this show more interesting. The ending was abrupt and didn't provide any sense of closure for the story either. If there was any attention to the plot details, maybe it could've been an interesting look at sexual trauma and abuse, but every single potentially interesting plot point that was hinted at or introduced became a loose end that was never addressed. It looked pretty, but there was no substance whatsoever. Don't even give this a shot if you like BL, you'll be disappointed.

So I finally decided to watch Ai no Kusabi, and now that I've let it disappoint me, I feel the need to complain about it. Thus I will start my first review ever on this website, but don't expect too much, as I rarely have any clever things to say. I just like getting mad at things I don't like!

I will be comparing this version to the original 1992 OVA, for I've decided to watch that first and enjoyed it a bit more.

I'd love to talk about the story, but I really didn't notice anything that would even resemble something like that, all I could see was just boring nonsense. After watching the original which, not gonna lie, left me a tiny bit confused, I was hoping this version would clear some things and answer the questions I had. Sadly, they gave us just a small amount of new info, if there was even any. I can't recall.

The setting was something I hoped to enjoy a bit more, after all I'm a sucker for futuristic worlds, but I won't praise a thing about this. It wasn't done well at all and it didn't seem to play any important role to the story. What a shame! Okay, so the main theme of this story is a big social gap, with some people suffering in the slums and some people being treated like some higher entities just because of their light hair. Great idea, but what's the reason for that? I won't accept something like this without any explanation.

The author really had a fantastic idea when they thought of this I bet, but I can see that this anime adaptation didn't do it justice, it could only disappoint me. I'd cry for all that wasted potential, for real. I'd say I'd like to see someone try once again and do it better, but after I gave it a thought, two adaptations of Ai no Kusabi are more than enough already.

Oh would you look at that background art, yuck! You see, when I watch anime, I LOVE to judge backgrounds because it's supposed to really suck you into the world of the series you're watching. In this particular anime though, the background seems to be all around the place and isn't pleasant to look at at all. I could forever rant how out of place it is or how they've chosen the worst colors ever to use, but nobody wants to hear that. I understand there might have been a lack of budget, so they couldn't make the landscaping that good but that doesn't mean they couldn't have tried to make it a bit prettier at least.

As for character design, that was quite average but compared to the backgrounds it seems godly. The characters were pretty but most of them suffered from "the same face syndrome". Their outfits, though? Especially the way pets were dressed? Ew. No thanks.

The animation was good, smooth and without a major problem, so I've got no more things to complain about in this section.

If it seems I hated the art, oh don't let me started with the soundtrack they chose for this anime. It either didn't fit anything or wasn't present at all when it could have made the scene stand out. The only thing it did was make me nervous from how strange it sounded. Then there were the opening and ending songs, but... huh? How strange. They were so basic that I can't remember how they sounded at all, and I think I don't want to remember.

The voice actors did a fine job for the most part, but there were few characters who made me want to be deaf. For example, Kirie, oh what have they done to your voice, poor baby. Even he wasn't as bad as that Mimea girl though, her voice was literally the death of me.

Not only was the story nonexistent and boring, the characters and their personalities suffer from the same curse. They were more alive and real in the older OVA, where even the side characters were fun to watch and were unique. Most people in this were annoying though, existing for no reason at all. Once again I will talk about Kirie who I considered quite a well done character in the older version, who was now acting like a five year old and was so damn aggravating.

For Iason, he is still lacking any personality. In the older version, they at least made him interesting in the way he was obsessed with Riki, but holy moly. If he was completely absent in this anime and replaced by some random existence, I'm sure I wouldn't see a difference. Riki was just confused, as always it seems. I think he doesn't know what he wants at all, and even I have no idea what's it that he wants. I don't know anything, literally, because this anime just gives us nothing.

The lack of backgrounds for the characters bothered me. I wanted to know more about them, about their motives and goals. I wanted to learn why they are the way they are, because they all seem so broken, but I got nothing, just questions that won't ever get an answer. I get it, there was too little time for any of that, but that's not an excuse.

So as you might have noticed, there are many problems I have with this anime, and there would be even more if I thought about it for a bit longer. I can't help it but compare it to some of the good anime series the year 2012 gave us and can't believe we got something as bad as this at the same time. I didn't expect much though, of course, I just saw this as another shitty yaoi, but it surprised me that not only the story and everything else failed me, but even the sexy scenes were pointless.

So, did I enjoy this? No. Will others enjoy it? Depends! Some people really like this - I imagine they're just thirsty fujoshis. If you're looking for an interesting story, you won't find it here, but if you're looking for sex scenes that suck ass (probably literally), you're in the right place. I'm just glad it only had 4 episodes.