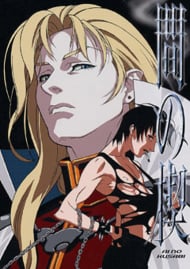 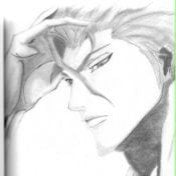 Okay, Ai no Kusabi is one of the better examples of Yaoi that I've seen thus far. The story line is sci-fi in nature__centering on a planet which consists almost entirely of a male population and over lorded by a super-computer by the name of 'Jupiter'. This masculine society is separated into a caste system by hair and eye colour where, as is to be expected, the 'Brahman' and the 'Kshatriya' are usually blonde-headed, fair skinned, and pale eyed. The 'Dhalites' or 'Harijan' of this caste would be the dark-skinned, brunette, and brown-eyed men from the so-called 'slums'. The red-heads and dirty-blondes and such are somewhere in the middle... Now, the overall story line of this anime is semi-original. It bears some resemblance to the futuristic ideas shown in anime like Cowboy Bebop and Trinity Blood, but as of yet, the general plot and events are new although cliché. The main characters Iason Mink((voiced by Shiozawa Kaneto)) and Rikki 'The Dark'((voiced by Seki Toshihiko)) are from 'entirely different worlds' to use the clichéd, but totally appropriate, idiom. Iason Mink is a high-ranking 'Blondie' from the capital city, and Rikki is a 'Mongrel' gang-leader from the slums. The two characters meet completely by accident. In the first few minutes of the first OVA, we are shown a scene where Rikki is being chased down for some unknown reason by four to five men who are of a higher class than he. He is more or less overtaken and overpowered by these men, and is about to get the s*** beat out of him, when Iason Mink steps in. Now, Iason is shown as being very large in stature, probably along the lines six feet three inches to six feet seven. This being said, he is able to defeat Rikki's attackers quite easily.  Rikki, having a sense of pride that is made known to us fervently throughout the anime, seeks to repay Iason's deed with his own body. This is where the story begins in earnest. The rest of the first OVA consist mainly of Rikki's exploits with his gang. We are introduced to Guy, who is currently Rikki's best friend, and formerly his lover__or 'pairing partner'. There are contentions between the two: Guy is suspicious of Rikki's sudden return after a long absence, and is concerned about Rikki's sudden change in character. Rikki, of course, denies any accusations of said change, and brushes off Guy's concern.  From there, the conflict evolves from a simple 'concerned friend' situation to a 'jealous lover' feud. The love triangle between Rikki, Guy, and Iason turns this anime into a tragic love story similar to the one in Anne Rice's novel Interview with the Vampire, involving Lestat de Lioncourt, Louis de Pointe de Lac, and young Claudia. I will not give out any more details for those of you who haven't yet seen Ai no Kusabi through to the end. Now, on to the animation. The overall art of this anime is very good. It strays somewhat from the usual Yaoi/Shounen-ai character design, which consists of very effeminate men and floofy-girly-girls. The animator for Ai no Kusabi instead chose to make his characters very tall, graceful, and undeniably masculine. This was a very wise decision, for it gives the viewer a truer sense of the yaoi theme, and emphasizes the 'all male world' that the anime takes place in.  If one were to watch this anime, I would highly suggest watching it in HD, or ordering it on disk. Since it was made in the early nineties, the quality of the OVA has degraded and is not as good as it might have been. The sound quality is excellent for such an old anime, and the voice actors were well-chosen. Overall, I give this anime an eight and/or four stars. I highly recommend this for anyone who is a fan of yaoi and needs an OVA that is explicit, but not quite hentai. I hope this review has been of help, and thank you for taking the time to read it.

After reading so many good reviews about this anime, I had my hopes up pretty high when I started watching Ai no Kusabi, so maybe it's my own fault I didn't like it that much. The story is interesting and I like the world they live in, but there's just something about Iason and Riki that I can't like - their master-slave relationship. Don't get me wrong, I can still enjoy a love story even though it's abusive and/or somewhat wrong, but this one is too much. Iason has kept Riki as a slave for three years, breaking him down into obedience. Then he decides to set Riki free for a year, but goes back on his promise after Riki gets in trouble. You can clearly see the hope vanishing from Riki's eyes as Iason tells him he's not free anymore. He doesn't want to be Iason's slave, and he's even scared of him. There are some flashbacks from the time when Riki was "trained" and he's clearly distraught just thinking about it. Riki is NOT consenting. At least not in the first 3 years of their relationship. When Riki finally starts developing (or admitting) feelings for Iason, he's so broken down that I can't help wondering whether it's Stockholms syndrome. I really WANT to believe he's always loved Iason, and that their relationship is good and consenting, but I can't. After everything Iason's done to him, I just can't. The ending does prove that they both love each other, but it still didn't get to me. Instead of thinking "oh, how loving", I though "poor Riki has finally given in". Even looking past their relationship, the ending wasn't to my liking. It just felt pointless, and I wasn't really that sad. Overall I never really felt much for this anime. There were a few scenes where I became emotional, but for someone who cries when Ariel from the little mermaid (disney) becomes a human, I was expecting a more emotional response. I never cried or laughed. Just watched in silence with a "meh" expression on my face. It's too bad, because there were a lot of good things about this anime. If there hadn't been a love story in there, or if the love story was between someone else, I would have liked it a lot more I think. They succeeded in most things, but they completely ruined the love part of the anime. Update: So I've read the light novel and re-watched this anime and now I feel like I understand it a lot better. It is in fact a great story, but this anime didn't quite capture the deep raw emotions in the same way that the novel did. I was really invested in the novel and loved it, but after watching this anime for the second time I sadly have to say the anime didn't do it justice. For people who have not read the novel you'll probably be confused (as I was if you read above), and for that reason I cannot give this anime a higher score. Even though I understood it better the second time and I don't dislike it anymore, an anime cannot only cater to fans - everyone has to be able to understand it. In other words: The novel deeply centers around Riki and Iason's relationship and feelings towards each other - making the ending sad, but understandable. The anime tries to compile 6 volumes into 2 hours and forgets about the feelings-part - making the ending pointless and confusing.

I had been wanting to watch this anime in forever, but only managed to a few weeks ago; I watched the old version, but I'm probably watching the new version too. At first I was unsure about whether to choose the old or the new version, but then I just went with the first one, and I have to say it was a wise decision; even though the design and the animation are pretty old, and you can see that by the drawings and everything, it was very great no matter what, and probably it was even better just because the characters where the way they were. I have to admit that I already loved Iason before he even apparead in the anime, but while watching, my love for him only increased; there were some moments I felt slightly disappointed with him, but those feeling were soon wiped away by his adorable behaviour. The love story between Iason and Riki is movingly perfect, a union of love and pain, power and weakness, will and need, hurt and care; they're constantly denying their love for each other (Riki does more than Iason, who clearly admits Riki's not just a pet to him anymore), hiding it behind a convenient sexual relationship (which is part of the whole game, but there's more behind it).  I really liked how the characters were designed, they weren't the common stereotype of yaoi characters (very feminine and emotional), they were very manly, they were strong, cold and sometimes even a bit sadistic, but they never failed to express their emotions and feelings of love (because there's not just one couple in the whole story, no spoiler). Another important thing, at least to me it is, is that they weren't young boys but pretty young mature adults, which made it all more interesting and fascinating. The ending completely destroyed me, but at the same time gave me the shivers (in a good way) and I found myself smiling while crying... 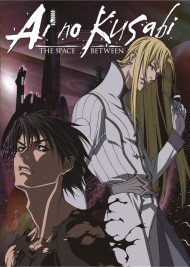 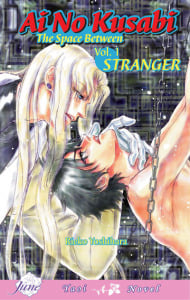