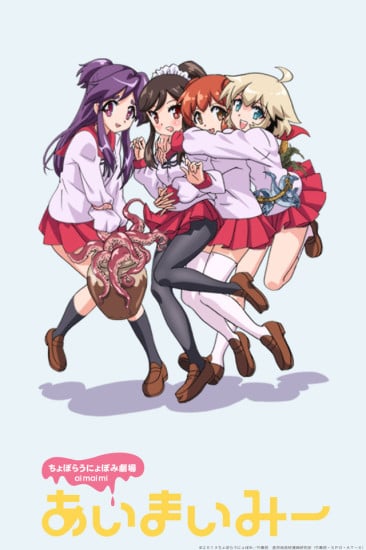 Manga is a tough business and only the strong will survive.

Both have similar fast, absurdist comedy and look very similar. I've always been a big fan of Ai Mai Mii, and as soon as I saw Fushigina Somera-chan, I loved it for the same reasons!

Extremely similar random humor with similar gags and almost identical characters. There's a lot of third-wallbreaking, parody and humor not vested in reality.

Both of these shows feature nonsensical humor that is more often than not a bit detatched from reality. People being killed just to be alive moments later, magic, pure randomness and physical impossiblities.

If you enjoy mostly fast-paced stupidly random comedy you'll probably enjoy this if you enjoyed the other.

Both of these titles are short, random and fast-paced comedies about school girls.

If you liked one, there is a good chance you will enjoy the other as well.

Have you had enough of animes with plots? Do you just need more random humor in your life? Well, these two anime feature a lot of slapstick humor, bizarre scenarios, and high school girls in clubs. So, if you just need more plotless anime, go ahead and try this recommendation.

The students of the Geijutsuka Art Design Class study all the various fields of art, from sketching and painting to graphic design and photography. While the mischievous Noda is always thinking up new ways to have fun with her partner in crime - tomboy Tomokane - the ditzy Kisaragi is content with doodling cats in her sketchbook. With Namiko attempting (and...

If you kind of liked Ai Mai Mii, but are looking for something much better, try GA.  It shares the similar comedy, school life feel, but is a huge improvement over Ai Mai Mii.

Both series focus on art (or in Ai Mai Mii, manga), but with a cutesy and comedic fashion. Both are heavily moe, and feature high doses of randomness. However, GA has some information put into it, whereas Ai Mai Mii does not.

In either case, if you liked one, the other may be enjoyable to you!