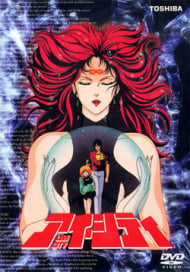 StoryAi City opens with a bizarre display of blood vessels, DNA strands, and various bolts of electricity; I don't know about you, but to me this pretty much screams "oh man, am I in for a hilariously-bad ride!"It did not disappoint.Ai City has it all - giant floating heads, random explosions of gore, psychic powers, massive eyeball and tentacle creatures, and an ass-kicking bunnygirl who constantly, for no apparent reason, ends up naked on-screen; really, what's not to like?! Seriously though, the story is interesting enough on its own. I can't say too much without spoiling (and writing the synopsis in itself was tricky), but in general it revolves around genetics and people with superpowers; most importantly, the main character, Kei, is trying to protect a young girl named Ai. Joining him are an extremely motley crew, including the always-drunk 34-year-old ex-cop Raiden Yoshioka, who has a flair for the younger ladies; his raccoon-like sidekick; the always-naked K2; and a few others. The bulk of the movie involves Kei and his buddies fighting the current henchman sent to retrieve Ai, though near the end of the movie a more intense villain emerges and the stakes are raised quite a bit. Does it work? Yeah, to an extent. At first, the bizarre storyline and strange characters make for an entertaining watch - especially when random and completely unnecessary gore is thrown in for good measure. Though after about an hour, once the nature of the world is explained in detail, the novelty starts to wear off and it becomes more difficult to complete. It doesn't help that Ai City also has an extremely confusing and unsatisfying ending. If you are into 80s cyberpunk-style anime and are ok with watching something mindlessly outrageous (similar to watching such self-proclaimed classics as Baoh and Psychic Wars), then Ai City's conglomerated story would work for you. AnimationThere's nothing inherently bad about Ai City's animation, but there's nothing inherently good either. If you've seen one anime from the 80s, you've seen them all - the character designs, dystopic scenery and overall look are very similar to a number of other same-era cyberpunk anime. The tentacle-type creatures look, of course, like an eviscerated belly, and the gore in general is hilariously bad. The animation fits the age and tone, but overall doesn't deserve more than a slightly-above-average score. SoundAi City's soundtrack is undoubtedly produced in the 80s, being dominated by glorious synth-heavy tracks with equally as entertaining lyrics. For example, during a psychokinetic battle between K, J and two Tuned Men, an English-voiced track about men with psychic powers wails in the background. Though generally I find 80s music in anime to be cheesy, in Ai City it seems perfectly matched for the overall production and tone. Many scenes are also devoid of music, instead choosing to showcase various sound effects such as explosions.CharactersI wish I could rate this section higher for sheer awesomeness, but will instead stick with a more traditional review score based on how well the characters work. Ai City has such a random selection of characters. Kei works fairly well as being a concerned father who wants nothing more than to protect his daughter; Ai is fairly useless and one-dimensional - plus she tends to scream "PAPA!" a bit too much for my liking; Raiden is probably the most entertaining character in the movie, though his brazen drunkenness goes away quickly, to his detriment; and K2 bizarrely changes from a killing machine to a coy and sexually suggestive woman. Oh, and let's not forget that Mr. Lee is essentially a clone of Shredder (that's right, TMNT nostalgia!) with bionic eyes. This odd mix of characters made me reminiscent of Crystal Triangle.The one thing I didn't enjoy about the character development was the sudden and unexplainable "falling in love" that K2 and Raiden experienced with each other at the beginning of the movie; though I understand why this development helped a bit with the plot, it seemed too rushed and forced to be realistic. OverallAi City is a perfectly watchable cyberpunk anime, with a few reservations: you have to enjoy watching bad anime, and you have to appreciate an 80s soundtrack. Ai City would also be a good choice for fans of cyberpunk and genetics - but you still have to enjoy watching bad anime! In my opinion, the bizarre combination of characters and monsters make it an entertaining viewing - at least once.

PREFACE Ok, what the heck did I just watch right now? This was supposed to be a mystery/action/angst movie but it looked more like a horror house attraction, only the scary freaks were dressed like clowns. Yes, clowns are the scariest thing in existence but they are not suited in a grim dystopia setting with a supposed serious theme. This is after all the main problem of this movie. It tries to throw in a dozen serious and interesting themes but fails completely to feel scary or interesting or serious or whatever. Remember those old horror films of the 60’s? They may have been scary back then but nowadays they are only good at making you laugh and get the niche French tag Gran Guignol. Well, those films are excused a bit for being old and made in an era with a lack in convincing visual effects. This movie on the other hand is not really old. Several similar movies were made around the same time and, boy, they look decades ahead of it.So, what went wrong? PRODUCTION VALUES As far as looks and sounds go, the movie ain’t bad. There is detailed work done in the backgrounds, so the technocratic city, the visual effects during the battles and the bizarre otherworld look very good to gaze upon. The problem comes with the foreground. The characters try to pass for serious or scary but are in fact more comical than anything else. From the lame bald underlings, to the transvestite sub-boss, to the freaked-out crazy midget old dude with the imba powers, everything looks like a circus instead of a fitting distopia cast. Did I mention the scouter foreheads? Man, what a lame idea! In this series your “power level” (normal people have 5; see the parallel?) in psychic abilities is revealed as neon glow numbers on your forehead when you are fighting, as if you have the need to reveal your statistics to the opponent or something. And these dudes are called Headmasters, lol, a Transformers allusion. And I won’t stick much to the context of the dialogues which are written by a 10 year old and hardly seem fitting for such a movie. CAST & SCRIPT Never, never, never try to include more themes than the duration allows you to. The scriptwriters added a dozen different elements in it and tried to analyze them in 90 minutes, half of which were action scenes. Guess what; they failed. What can I say, not even the Matrix trilogy managed to do it right in the long run; imagine this b-level movie trying to do the same with far less time and money. It was bound to fail.The story itself has room for a nice watch. The lead man and a bunch of chicks are running away from an evil organization that plans to exploit their infinite psychic powers to become Gods and rule the universe or something. Very cheesy, I know, but the idea of espers and reality bending with mental powers sounds so much better than magic or McGuffin big bombs. Anyway, the only good part in it is the premise as all the rest are a mess. Half the story needed to be implied through dialogue and flashbacks and the other half was battles in a shounen type of manner. Ok, maybe a bit better than shounen, as the defeated warriors are torn to shreds in quite a gruesome way. Then again, you hardly get to know them so it doesn’t feel scary or sad, other than a fleeing feeling of cool. The good-guy characters are simply not given the proper time to let you bind with them and, typically, the lead man just gets SSJ when he needs to protect those he cares about, thus there is no strategy or suspense at all. Also, the villains are nothing but cardboard idiots. Anyway, the story in general is a big failure as in the end the crazy leader dwarf dude just got super powerful and tried to beat the very people all his armies couldn’t capture for they didn’t have infinite power. Well, hello, he already had the power and if would leave the heroes alone, he could have ruled the universe, minus the small cottage they wanted to live peacefully in. LEGACY This movie is a joke. No, actually it is not even funny. So simple, linear and lame that you can hardly enjoy it if you have seen even one of the titles in the suggestion list below. SUGGESTION LIST AkiraChoujin LockeNayuta 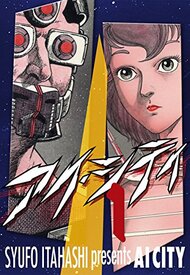