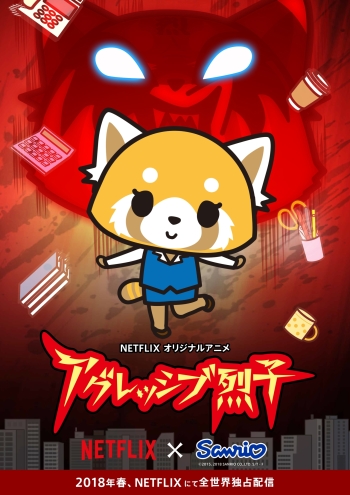 Aggretsuko follows the titular character Retsuko: a single 25 year old red panda during her stressful experiences working as an accountant. She secretly sneaks refuge in a karaoke bar to blow off some steam with her death-metal (yes really, and it's awesome). Thing is that this anime is more than the marketing gimmick. This’ll be less of a review and more of a short thing on why it made me feel feelings.

The ONA as a whole does a very, very good job at being emotionally resonant. I empathize with Retsuko’s anxiety from being overwhelmed. To my surprise it doesn't sugarcoat anything she confronts, including dealing with blatant misogyny from her sh*tty boss. The metal stuff isn’t just a running gag, she has every reason to be pissed off and it’s a believable catharsis. The music juxtaposes her being an otherwise sweetheart. Throughout the series she’s a people pleaser, making her a doormat to be exploited. Retsuko’s arc is her learning to be more assertive, both in her professional and eventual romantic relationships. I can’t reiterate enough that the show’s more than it’s shtick.

The series loves it’s characters (mostly) and that makes me happy. Retsuko’s circle work off each other like friends would. It’s a balance between cartoonish and multidimensional. Fenneko’s deadpan snark to Haida’s neurotic dorkiness just work. Even the unlikable characters are great ‘cause they’re great at being unlikable (I’m paraphrasing Arkada). Their small victories are always satisfying because of their relatability, which is why it works so well as a slice of life type of thing.

The animation is lively and only enriches such a character driven story. It’s simplistic and expressive. While cutesy and marketable the animators managed to capture a wider range of emotions, even if it’s not subtle, but that’s the kinda show this is. Both the English and Japanese VAs do a solid job in their roles, and unlike Devilman: Crybaby Netflix actually translated the lyrics to Retsuko’s songs. As a whole it’s a great example of aesthetic being apart of a show’s narrative.

I’m not used to seeing anime about Millennials in the workplace, so it’s nice to see one well executed. The last one I could think of was Shirobako, but another comparison I’d make is to My Lesbian Experience With Loneliness. Aggretsuko took a simple gimmick and made it an empathetic story about the confusion of learning to adult, I can't think of a better compliment than that.

I seriously enjoyed this. I watched it with my 10 year old sister who also enjoyed it a lot. I found it hilarious and very entertaining. The simplistic animation works so well with the comedy and I laughed out loud a LOT. This anime also incorporates the real stresses of everyday life for an office worker, something anyone with a boring day-in-day-out job can probably relate to (almost depressingly so) and actually laugh at. Overall an 8/10 for making me laugh and giving me a nice smooth plotline to sit back and enjoy.

The real world is a tumultuous place. The life of a worker can be rather stressful in the wrong situations. The people in your life can be unbearable little shitstains that make you wanna beat them until they beg for mercy. The days are long and arduous sometimes, and the work can just keep piling on until you back breaks. It becomes such a blessing we always have resources to help keep our sanity at bay. We all have hobbies; we all have friends. We all have a reason to keep going with the cycle of days that make up the majority of our lives.

Aggressive Retsuko is a commendable achievement. Its characters are so fully realized, fleshed out, and relatable that they are more human than most animated shows can even dream of. Their situations are as classic as they are comically relatable, and the way the show tells them is as genuine and endearing as it can get. Everyone except for that fucker Komiya gets some time to impress, even those whom we and Retsuko all saw as mind-numbing caricatures that embody everything we hate about peers and coworkers. Fenneko, Haida, Washimi, and so many others are a blast to watch, both in terms of seeing them interacting with each other and in witnessing their hobbies. Even if some moments are more out-there and convenient, what we are presented with is both entertaining, charming, and most of all, beneficial. Having such a fun cast to work with only seals the deal on making this uproarious piece of edutainment work.

More people need to see this show. As discouraging as it can be for someone to see what a pain the work life is, it's more than worth it for them to see what kind of wonderful environments, relationships, and hobbies await everyone. It also serves as surprising reassurance that everyone is just a person dealing with things their own way, and that we just have to find those who connect with us to make our daily lives worth it all. The best part is that the show does this without constantly spelling out what it’s teaching. Honestly, even with the coarse language and booze, this show should be fun for the whole family. The Sanryo merchandising and style that Fanworks worked with so expressively, adds a layer of accessibility to the show. The dub being a real treat extends that reach even further.

We watched The Simpsons and Transformers as children, so there is no excuse to not see this at any TV-consuming age.

(This review covers the first two seasons, but is completely spoiler free)

Aggretsuko is a unique musical anime, which doesn't let the fact that it's meant to promote toys stop it from being a worthwhile experience for young and mature audiences alike.

The story is fairly simple, but brings not only a lot of enjoyment, but also encouragement and salvation for anyone who's dealing with a stressful life. It revolves around the red panda Retsuko, who constantly has to put up with other people's issues. Her boss harasses her, her coworkers make her do their work for them, and her friends and family never seem to understand. To relieve all of this stress, she goes to unpopulated places to growl her heart out to death metal. Over the course of the show, she meets a lot of people and men, and in doing so, gets to understand herself and what she wants in life. The show perfectly mixes this surprisingly realistic depiction of life with comedic and relatable situations, and there's never a dull moment throughout.

The cast is a very colorful and varied set of characters that all contribute greatly to the show as a whole. They each have their own unique traits and purposes in the story, and bounce off each other during interactions. Every character feels like a person you could meet in your life, while also being a perfect caricature of said person, and that's one of the strongest points of the comedy and why it works out so well. It can be unrealistically funny and relatable at the same time! The cast is brought even more to life much thanks to the passion you can feel each voice actor has for their role. The characters also tend to have individual mannerisms and movements, which makes each and every one of them stick out that much more.

Now, when it comes to the music, that is where this show shines the very most. Arguably a musical, this show has a fantastic soundtrack with the occasional wonderful song number. Not only do you get to see your favorite red panda do death metal, but every once in a while, the side characters take the stage with their own styles of music as well. as previously mentioned, the voice actors all do an excellent job, and they also deliver when it's time to take the mic and sing!

There isn't much to be said here that hasn't already been said. Despite the art style being simple, the animation is surprisingly fluid and distinct, and does well to enhance all other aspects of the show.

All-in-all, this was a very enjoyable ride, and upon finishing it, I found myself craving for more. This show delivers on everything it sets out to do, and I would recommend it to pretty much anyone!

Honestly, I watched this out of pure recommendation, just because I heard it was about death metal, a musical genre that relaxes me, and frankly, I laughed. I found myself laughing many times. And also headbanging, and dancing in my panties all over my room.
If I understand this well, it's created for the Japanese branch of Netflix, I have no idea if it had any kind of occidental influence (or money) because the series has a sort of Nintendo style to it. It looks like a long-lost rhythm game for the DS if anything. A time when videogames were art.

The graphical style got me hooked on the series, these critters are cute, the facial expressions they pull, even just how they move by going from the foreground to the background (reminding me of Paper Mario, at times). The soundtrack to this series is pure bliss to my ears, be it at the karaoke when they yell a lot of METAL, or even just the ambient music that plays throughout the show.
Not displeasing to my senses at all. Even more, if one gets hooked to the esthetic of cuteness meeting its aggressive side.

The episodes are really short and no plot really gets developed. This makes the show easy to enjoy, never really a time to get bored or fill the series up with filler and bad animation. One punchline follows another, and the whole thing is coherent. The Hippopotamus was a highlight, talking some fast bullshit and moving wildly. Also, they didn't spare themselves from screaming a lot of metal, so it's all good.
Honestly, I don't know if this could ever be displeasing, it was all very stupid but never really felt heavy to me.

This show isn't deep or that intelligent, but there was some nice common sense in mockingly depicting Japanese work culture (even if the characters are very broad caricatures).