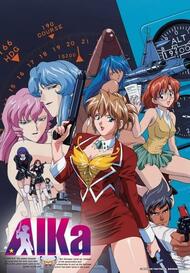 This is one of those animes were panty-shots and ecchi content are more prevalent than the actual plot. Story: What little I could gather from the story is that Aika and her sidekicks are treasure hunters in a post-apocolyptic world. in order to save their business, they take on a job to find some sort of energy-thing. As they reach their target, they are attacked by Delmas, weird girls in skimpy outfits with a truly bizarre leader (and his even more bizarre sister). After that, the plot more or less disolves into panty-shot filled fight scenes. (There's also the sub-plot of Aika's fancy corset) Animation: The animation is decent, but I have to wonder how the animators felt after drawing panties for that long. Sound: No comment Characters: With only 7 episodes, there wasn't much they could do to make the characters rounded. The characters were a bit on the insane side, though. From the vindictive, rather mental Nena to the cross-dressing Shuntaro... the cast is just so weird.

ART & SOUND SECTION: 6/10 [Argh! Help! I’m blinded by all the panties flashing before my eyes.] Well, nothing bad about it. The women look ok and so do their white panties. They talk in a lukewarm and uninteresting way. Their motion during fights and the music themes have spice. The angle of the camera shots are mostly worm view, for obvious reasons. The shadowing effects are of average quality and the colors show their blunt age. The shapes of the objects are average as well, giving a similar remark to animation in general. A notice must be given for voice actor Rei Sakuma, who is by far the most famous and best performer of them all in the show. It is as if the whole show is hunging from her ability to do voice acting right when all others are just fooling around. She didn’t have much material to show her talent but it is true the show would be completely unbearable if she wasn’t voicing Aika. STORY & CHARACTER SECTION: 1/10 [- I see white pantsu! - When? - All the time!] It is a simple spy scenario with a predictable plot. I could tell you more about it but… WHO GIVES A SHIT? This is a 100% fan service series and the story is there only for flavor. Heck, I hardly remember anything about it a few hours after I finished it. Because I was distracted by all the panties running through the screen. Characters? Pf! Just panties on women is all there is to it. No character development or interesting personalities are detected on board this vessel. The director, Katsuhiko Nishijima, has a "thing" for this fetish and clearly doesn’t care about anything else. VALUE SECTION: 6/10 [And the Oscar for the highest amount of pantsu ever shown goes to… Agent Aika!] There are these old b-movies, titled Attack Of The Killer Tomatoes. They are of really low budget and the story is insane. Yet, they are crazy enough to be considered cult. This series is something similar. It could easily be called Attack Of The Revealing Pantsu and is considered to be an equally cult title. But beyond some side historical significance, the chances of watching it again are low since there is no context or plot to keep looking forward to. Plus, an average hentai title provides more service than just panties. ENJOYMENT SECTION: 1/10 [Pantsumon! Got to watch them all … NOT!] Don’t look at me. I prefer hardcore hentai to just women’s underwear. I also like series with a good story and multi-layered characters; something this series is not close by a long shot. VERDICT: 3.5/10 My work is over. “Pantsu” out and head home. SUGGESTION LIST Gunslinger Girls. It has little girls, brainwashed to become assassins. WAY better characters. Ghost In The Shell (both the series, the movies and the manga). It also has sci-fi and a cyber woman assassin/swat member in it, but the story is a billion times better and is brimming with issues around humanity, soul, technology and politics. Graphics and sound kick ass! Battle Angel Alita (the manga). It also has sci-fi and a cyber woman warrior in it, but the story is a billion times better and is brimming with issues around humanity, soul, technology and politics. The battles and the cyberpunk atmosphere are mind numbing! 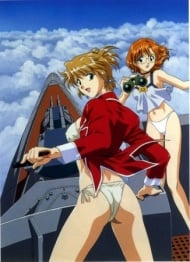 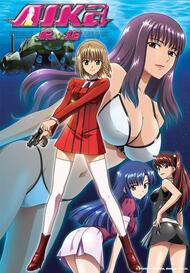 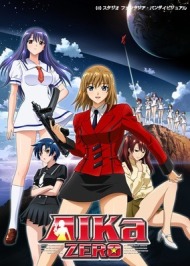